Audry Goertzen reflects on the significance of hope and faith in the smash-hit comedy series Ted Lasso, for the next instalment in our series on “bingeing” the arts during the pandemic.

I cannot remember when I first saw promotions for the show Ted Lasso, but I do remember when my then-boyfriend-now-ex-boyfriend texted with great excitement about it. He stopped watching after the first episode so we could watch it together, knowing I would be taken with the show’s main character and themes, not to mention the British-style humour. Though our love did not end up lasting, my love for the show did. In fact, my love for Ted Lasso has only grown each time I’ve re-watched it and shared it with friends, encouraging them to stick out season two despite its mixed reviews. I especially enjoy sharing the show with fellow Christians because they often like the same things about it: Ted’s wholesome and encouraging nature, puns so clever they are actually funny, and the themes of hope and belief. For though we Christ-followers ground our faith, hope, and belief in Jesus, those friends and I have struggled to be hopeful in the last couple of years, with each wave of the pandemic chipping more and more away at us. Ted Lasso has been a balm to my aching soul in some ways, with its humour, wholesomeness, and hope, and I’ve found it pointing me to Jesus more than once. 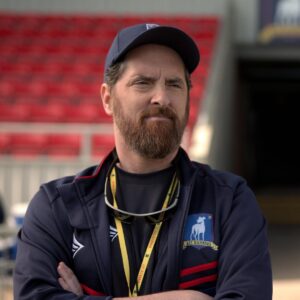 If you have yet to see the show, let me backup a moment. Based on a character Jason Sudeikis first created for NBC Sports to promote their new streaming rights for the Premier League, Ted’s moral, optimistic, flawed, forgiving, kind personality is hard not to enjoy. The show follows Ted after he’s been hired by the fictional UK football club, the Richmond Greyhounds. His lack of experience with football of the UK variety, not to mention the way his American folksiness clashes with British stiff-upper lips, sets him up for failure. Many viewers related, however, to the conclusion drawn by one character, the prickly journalist Trent Crimm of The Independent. After a day spent shadowing Ted, Crimm writes, ‘you can’t help but root for him’ (S1:E3). Ted’s optimism is infectious, if also irritating at times.

Ted’s infectious optimism is a clear theme in the whole show, as witnessed in the opening sequence during which Markus Mumford’s theme song plays. Ted is in the stadium stands, surrounded by seats vandalised with criticisms against the team. As he sits down, the blue vandalised seats turn red; first his own seat, then spreading out slowly, covering the criticisms, until the chairs spell his name. It symbolises how Ted wins the team and fans over despite their rooting against him at the beginning. 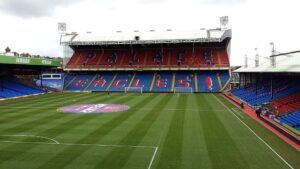 This theme is further displayed in the first episode when Ted ‘redecorates’ the locker room of the new team he is coaching with a handmade sign stating “BELIEVE” in blue paint on a yellow poster board, taped charmingly, if crookedly, on the wall above the door frame to his office. Throughout the first season to the last episode of season two, this poster signals a challenge and an encouragement toward hope and faith. It is hope and faith in the team’s ability to succeed, yes, but also so much more. It indicates belief in the character of the players, in the owner, in key staff members down to the seemingly lowly employees. It is belief in friendship, and in finding joy by stopping to listen to complete strangers playing music on the street. More than that, it signals a deeper current of the show that challenges and encourages the characters and viewers alike to believe in belief itself.

This is driven home in the season 1 finale, ‘The Hope that Kills You’, when Ted makes a climactic speech:

I disagree with the phrase, ‘It’s the hope that kills you’. I think it’s the lack of hope that comes and gets ya. See I believe in hope. I believe in ‘believe’. Where I’m from, we got a saying, a question actually: do you believe in miracles?

Ted dares his team to believe, to hope, to have faith, all despite the circumstances they face, the odds stacked against them, and the expectations piled on top of them. He asks them to believe something different is possible: to believe something good is possible despite challenging  circumstances caused by  matches lost, failed marriages, difficult parents, and schemes planned against you (which are just some of the circumstances the show portrays). At the end of the first season, we see that maybe it is the hope that kills, as the episode title suggests. In the final game of the season, as they face relegation and are down by one point against Manchester City, phones throughout the stadium ring and they realise all they need is a tie to continue competing in the Premier League. Amazingly, perhaps miraculously, the Greyhounds manage to score and get the tie. However, in their celebration, in their hope, the love-to-hate Jamie Tartt, now playing for the opposition, turns things around and quickly scores again, killing the hope they were just celebrating. Belief in miracles is contagious, but is no guarantee against disappointment.

As mentioned, in my own life, this show has had an especially strong draw for my Christian friends. I have been trying to put my finger on why that is. Perhaps it is that Ted rarely swears, despite the salty and typically-British language of all the other characters. Perhaps it is the emotional depth of the show, despite the at times surface-level nature of Ted’s optimism. Having watched it through several times, and discussed it with many people, I think it might be the infectiousness of the belief and hope that Ted preaches.

Perhaps the Christian viewer could feel threatened at the power of belief in something not directly named as God. And perhaps not.

Biblically, one finds belief as the hallmark message of John’s Gospel, while the synoptics preach a message that emphasises the command to ‘follow Jesus’ rather than ‘believe in Jesus’. The word ‘believe’ appears in every chapter of John except chapters 15 and 18. Both the synoptics and John’s gospel make it clear that our beliefs, our faith and hope, are best placed in God and not in the things of this world. God alone is the solid foundation. It is here that, despite Ted’s Bible-belt origins from his roots in Kansas, his objectless belief seems to be more rooted in some mixture of positive thinking, prosperity gospel, and toxic positivity.

The show’s writers, however, seem wise to this criticism. Season 2 does an excellent job of showing the limitations of Ted’s positive thinking as well as its rallying effects. We learn of Ted’s panic attacks and more of his family history, including his father’s suicide. We see his discomfort with team therapist, Doctor Sharon, and he begins to face those uncomfortable feelings, especially his anger. There are bright moments still, where we see the team celebrate a loss at the end of a long streak of ties, because at the least it was not a tie again. We see them rally around new team captain Isaac and eventually new coach Roy as they find their places in the team. Yet the overall theme of the second season is the depth and downfall of the deep faith placed in things ultimately working out because they believe in ‘rom-communism’; in other words, the happily-ever-after formula found in romantic comedies (S2:E5). This is where I see the need for faith and belief in Ted Lasso to be placed in something greater, something that can be pointed toward, prayed to, and petitioned. Aimless hope has its limits.

Still, I am not entirely convinced that such a faith–in things simply eventually working out well for good–is completely misguided. It brings to mind Mere Christianity’s popular quote, ‘If we find ourselves with a desire that nothing in this world can satisfy, the most probable explanation is that we were made for another world.’[1] The desires this world cannot satisfy point us toward God, just as the desire to believe in something does. Rare is the person who believes in absolutely nothing, who hates to hope or have faith. Certainly, we can each think of examples of people who tout such concepts, but do they enjoy hating hope? No. Hating hope, avoiding faith and belief in something more than the controllable is miserable. This is where Ted Lasso’s practice is so interesting, for even though his belief is not placed in God, his religion is arguably hope itself. He honours the part of himself that sees the good in belief and encourages others to do the same. He seeks to liberate hope, and the part of oneself that is made for another world.

This is where Ted Lasso’s practice is so interesting, for even though his belief is not placed in God, his religion is hope itself.

Arguably, this is precisely why audience affection for Ted and the show have been so contagious. World events have been crushing hope, making it more and more difficult to believe things will end up alright. Though the hope displayed in Ted Lasso does not go far enough, for it does not ground hope in Christ and God’s redemptive work of everything which we are invited to join, it liberates and celebrates our human instinct to hope. To have faith. To believe.