Nora Kirkham considers how Sally Rooney’s novel Beautiful World, Where Are You? encourages readers to seek out beauty and closer, richer relationships during times of ‘disenchantment and anxiety’, in the latest contribution to our series on “bingeing” the arts during the pandemic.

Is it really possible I witnessed such a scene, right in the middle of Dublin, only a few hours ago? Is it possible such things literally go on, in the real world you and I both live in?[1]

In Sally Rooney’s latest novel, Beautiful World, Where Are You?  twenty-nine-year-old Eileen attends mass and discovers a secret in plain view. Within the church of Mary Immaculate, Refuge of Sinners, she discovers living, breathing faith that transcends mere social ritual. Encountering liturgy in the real world complicates Eileen’s understanding of Dublin as a post-Catholic city, shaping email exchanges with her friend Alice. In their correspondence, Christianity emerges as a potential path out of the disenchantment that permeates their lives. Rooney’s characters are haunted by self-doubt. Like Rooney’s previous novels, Conversations with Friends and Normal People, Beautiful World explores relationships among Dublin’s bookish millennials. Following the interwoven lives of friends Eileen, Alice, Simon, and Felix, the novel can be read as a long string of questions.  Friedrich Schiller’s poem, ‘The Gods of Greece’, which inspired the title, laments the loss of spring, imagining a winter landscape where ‘no god reveals himself’.[2] 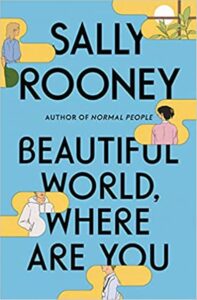 Here, Rooney introduces her first ‘low key’ Catholic character, Simon: Eileen’s attractive love interest who models a progressive form of faith. Simon works as an advisor to a left-wing parliamentary group, cohabits with women, and goes to mass every Sunday. His faith in Jesus is described as a ‘friend-to-the-poor, champion-of-the-marginalized kind of thing’.[3] It is so winsome that Eileen asks Alice, ‘how is it possible for me to admire someone for believing something I don’t believe and don’t want to believe, and which I think is manifestly incorrect and absurd?’[4] Overwhelmed by the demands of her writing career, Alice turns to the Bible for comfort during a mental health crisis and is ‘fascinated by the personality of Jesus in a sentimental way’.[5] While Alice proposes God as ‘a good option when it comes to putting something at the center of life’, she describes herself as living in a ‘philosophical nowhere place, lacking the courage of convictions on both sides’.[6] She confesses, ‘I have that resistance in me, that little hard kernel of something, which I fear would not let me prostrate myself before God even if I believed in him’.[7]

Eileen and Alice seek to recover a vision of beauty and meaning in their lives. The novel’s central question, ‘beautiful world, where are you?’ invites a tentative reopening to mystery. Beautiful World can be read as part of an emerging genre of post-secular literature in Ireland. As Charles Taylor explains, our secular age is haunted by religion as feelings of disenchantment, a profound sense of loss, malaise, and cosmic isolation can lead to a renewed interest in religion and spirituality.[8] Jo Carruthers writes, ‘literature constitutes a privileged space in which the return to the religious can take place’.[9] While post-secularism itself has been a part of literary thinking since the romantics, post-secular fiction today features a return to the religious through what John Mclure describes as ‘partial faith’ or ‘partial conversion’.[10] Post-secular narratives do not present a ‘triumphant reappearance of a well-mapped, familiar, religious cosmos, as it often does in conventional narratives of conversion’.[11] Instead, the ideological signature of post-secular narratives is the ‘re-articulation of a dramatically weakened religiosity with secular, progressive values and projects’.[12] A defining feature of post-secular literary rhetoric is ‘the strategy of perhaps’.[13] Faith acts as a wager as characters stand on the threshold of belief. Doubt is welcome.[14] While neither Eileen nor Alice embrace doctrinal beliefs, their friendship with Simon, as well as encounters with liturgy and the Bible, introduce them to partial incarnations of faith. 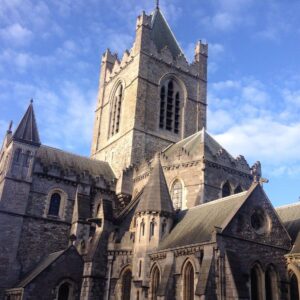 While the trauma of religious conflict and clerical abuse accelerated its secularization, Ireland and its writers continue to wrestle with its Christian heritage in imaginative ways. In a 2017 interview for The Irish Times, she explained, ‘I don’t believe in supernatural things, but I think there’s something in Christianity and its philosophy of radical self-sacrifice and radical love for others that is missing…how do people console themselves through periods of immense suffering? Capitalism doesn’t really have an answer. The free market isn’t going to help you, so what’s the substitute for what religion once was?’.[19] Rooney first explored religion in her debut novel, Conversations with Friends. Trinity College student Frances, who admits she had ‘hated religion as a child,’ finds herself drawn to the Gospels and tries to pray.

Alice and Eileen enter the realm of partial belief through a mutual longing for beauty. In her essay, ‘For the Love of Beauty,’ Simone Weil, whose work Rooney consulted while writing the novel, writes, ‘a sense of beauty, although mutilated, distorted, soiled, remains rooted in the heart of man as a powerful incentive. It is present in all the preoccupations of secular life. If it were made true and pure, it would sweep all secular life in a body to the feet of God; it would make the total incarnation of the faith possible’.[22] Eileen and Alice’s emails mourn the absence of beauty in contemporary society, blaming the invention of plastic and the fall of the Berlin Wall: ‘lurid ugliness is the predominant visual feature of modern life’ and ‘our quality of life is in decline, and along with it, the quality of aesthetic experience available to us’.[23] Seeking new ways of being in the world, Alice leaves Dublin for the west coast of Ireland and Eileen recalls a season of creativity, wondering if it would be possible to ‘imagine ever feeling again as I had apparently once felt about rain or flowers…Was I really like that once?’[24]

Mass ushers Eileen into a novel sensory experience, making strange her preconceptions of the ‘real world’. Her blossoming relationship with Simon mediates this experience. She speculates whether she is there due to infatuation or even the fear that Simon might love God more than her. While details of the church are quite sparse; ‘it was all white and blue, with painted statues, and dark paneled confessional boxes with luxurious velvet curtains,’ her desire for Simon transfigures mass into something ‘strangely romantic’.[25] She is mystified by Simon’s lack of external transformation: ‘he went on being fully and recognizably the same man as always’’.[26] Eileen listens to the Gospel of Luke, where a sinful woman anoints Jesus’ feet. The radical inclusivity of Jesus causes Eileen to wonder, ‘do I secretly believe there is something special about Jesus, and that to worship him as God, while not quite reasonable, is somehow permissible?’[27] During the Great Thanksgiving Prayer, she wonders if ‘at least some of the people in that church sincerely believed that they were lifting their hearts up to the Lord’.[28] As Alexander Schmemann writes, ‘the Eucharist is the restoration of love as the very life of the world’’.[29] Through witnessing communal thanksgiving in the Eucharist, Eileen experiences faith as tender, relational, and generous. She declares, ‘I think if I believed in God, I wouldn’t want to prostrate myself before him and ask for forgiveness. I would just want to thank him every day, for everything’.[30]

Where human relationships act as the primary starting point for re-encountering beauty, the person of Jesus emerges as a model. Simone Weil writes, ‘the love of the order and beauty of the world is the complement of the love of our neighbor’.31 In other words, a life oriented towards relationships illuminates the world’s beauty. For Weil, ‘the longing to love the beauty of the world in a human being is essentially the longing for the Incarnation’’.32 For Alice, Jesus embodies moral beauty. She says, ‘my admiration for that beauty even makes me want to say that I ‘love’ him, though I’m well aware how ridiculous that sounds’’.33 In Paris, she enters a church where she cries ‘a few picturesque tears about the nobility of Jesus’.34 Just as Eileen is mystified by Simon during mass, Alice is intrigued by the familiarity of Jesus’ humanity post-resurrection: ‘I find it hard to separate the Jesus who appears after the resurrection from the man who appears before; they seem to me to be all of one being’.35 Although Alice rejects his  resurrection as a reality, she demonstrates genuine interest in the theology of beauty: ‘God is beauty…Whatever is beautiful leads us to the contemplation of the divine’’.36 Jesus models beauty as a lived relational orientation that participates in the humanization and celebration of the present and physical world.37 An embodied Christian approach to beauty is one grounded in care for the other. 38 As Alice posits, readers of fiction regularly practice being-for-others:

In his life and death, Jesus emphasized the necessity of loving others without regard to our own self-interest. In a way, when we love fictional characters, knowing that they can never love us in return, is that not a method of practicing in the miniature the kind of personally disinterested love to which Jesus calls us? 39

While Alice admits that ‘there’s no end of fun to be had once you get into the Christian mindset,’ she remains firmly in a philosophical nowhere place. By the end of the novel, when asked if she believes in God, Alice answers that she only feels ‘there is something underneath everything’’.40

As the novel ends during the pandemic, it encourages readers to consider how they might seek beauty and closer intimacy with others even in the midst of disenchantment and anxiety.

Beautiful World invites its readers to dwell in gratitude for mystery. As the novel ends during the pandemic, it encourages readers to consider how they might seek beauty and closer intimacy with others even in the midst of disenchantment and anxiety.  The novel proposes a posture of tentative humility where the beauty of the world is made manifest in human relationships. Alice admits that she will not prostrate herself before God, yet she is aware that asking for forgiveness could be the ‘hardest thing’ she ever learns to do.41 Love is what makes any belief possible at all. As Alice tells Eileen, ‘nothing else matters on earth’ more than loving others and the endless pursuit to discern what is right and good.42 If beauty is known through desire, then the question, ‘beautiful world, where are you?’ is one that recognizes that beauty lives in the very pursuit of itself.

[1] This article is an abridged version of a paper that was presented at the University of York and University of Tokyo’s Religion in Irish Literature Symposium, January 2022. Sally Rooney, Beautiful World, Where Are You? (London: Faber & Faber, 2021), 122.

[10]John A. McClure, Partial Faiths: Fiction in the Age of Pynchon and Morrison (Athens, Georgia: University of Georgia Press, 2007), 3-4.

[14]See Richard Kearney’s definition of anatheism as ‘an existential wager: to leap or not to leap, to believe or not to believe.’ Richard Kearney and Jens Zimmerman. Reimagining the Sacred (New York: Columbia University Press, 2015), 21.

[18] Michael Nolan, ‘Sally Rooney: ‘A Large Part of My Style Has Definitely Developed Through Emails.’ The Irish Times (November 13, 2017).

[22]In an interview with the New York Times, Rooney cites Weil’s essays as an influence for the novel. See Lauren Christensen, ‘It Was Like I’d Never Done it Before’: How Sally Rooney Wrote Again.’ The New York Times (August 28, 2021), and Simone Weil, ed. Laurie Gagne. Love in the Void: Where God Finds Us (Walden, New York: Plough, 2018), 39.

Tags from the story
Sally Rooney, theology and the arts
0
Facebook Twitter Pinterest
LinkedIn Email
Written By
Nora Kirkham
More from Nora Kirkham
‘I can’t understand how one can pass a tree and not be...
Read More