Editors Note: This is the second installment of a two-part review.

The After the Call event created by postgraduate practicing artists within the Institute for Theology, Imagination and the Arts (ITIA) reached a zenith on Wednesday, 11th April with an interdisciplinary performance featuring original music, monologues, poems and dramatic scenes as ITIA and the venue of Saint Andrew’s Episcopal Church served up an unforgettable night of thoughtful and fun artistic entertainment fitting the theme.  In conjunction with the art exhibition highlighted in part one of this review, the performance was the culmination of contemplative and creative engagement with texts on ‘annunciation’ and ‘calling’ by several postgraduates in ITIA. Like the works in the exhibit, the performance pieces emerged from interdisciplinary engagement with biblical texts at the intersection of theology, arts and culture, and were weaved together with a great deal of imagination. 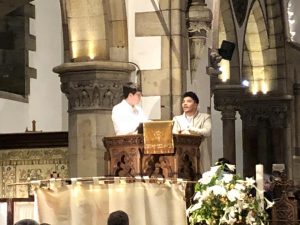 Weaving is indeed an appropriate image to describe the performance itself as well as its connection with the exhibit.  Led from the musical side by Joel Clarkson and from the dramatic side by Karen McClain Kiefer, the pieces for the performance emerged from a few central ideas and images that naturally expanded to involve more artists and artforms. Working with an increasing number of performers, musicians and storytellers – and alongside their visual artist partners (Liz Crichton and Dan Drage) – Clarkson and Kiefer observed connections between the disciplines and guided the development of the performance pieces accordingly, interweaving them around the shared theme of ‘calling’ that so resonated with each artist. 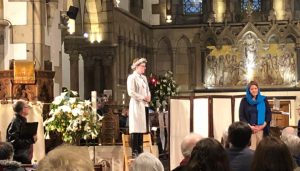 Clarkson was in the midst of composing a canticle piece for the All Saints Episcopal Church choir that resonated with the annunciation passage in Luke (1:26-38): The Magnificat, and it became an ideal focus around which to develop the performance.  Fittingly, Clarkson galvanised the All Saints Choir to perform the piece. Under the direction of conductor Andrew Macintosh and accompanied by organist Lance Peeler, they superbly delivered The Magnificatfor its public premiere at After the Call.  Clarkson also performed with his sister, Joy Clarkson, as a duo – Two Benedictions– and together, they offered another original composition called Disappear, a moving and beautiful folk song that poetically describes transition from change and decay to new life.

In this composition, Clarkson achieved a lyrical, expansive, interplay between simple, bright melodies which transfigure into lush, multifaceted harmonic textures. Invigorating, it expresses an inbreaking of something transcendent into the ordinary, evoking an awareness of the theophanic, of the prophetic – of Mary’s role in expressing both hope and the prophetic nature of her prophetic role; of her surprising awareness of the narrative; and of her preparedness to synthesise the microcosm of her own moment with the macrocosm of God’s redemptive plan.

Other musical performances included a lovely instrumental version of The Summons by Laura Harrison on flute and Kelly Norris on clarinet; and a brilliantly improvised prelude and series of interludes by Erik Eklund which underscored parts of the performance and held it nicely together.

Inspired by the abrupt and sometimes bewildering notion of a calling as found in the annunciation by Gabriel to Mary, Kiefer sought to develop, connect and direct performance pieces from people’s stories about their own ‘calls’ using the theatrical forms of monologues, dramatic scenes and poetry. She invited a few peers, friends and actors to share stories about their own ‘calls’, and then wove the stories together mostly from the texts and scripts themselves without being able to see them all together before the performance.  Where there were gaps, Kiefer wrote pieces to keep transitions smooth and connected, and worked with Clarkson to identify musical pieces to include. As the director, her primary role was as a kind of weaver, desiring to honour the spark of each strand while tending to the integrity and beauty of the overall tapestry.

Indeed, what the performers did on Wednesday, the 11thof April 2018 was weave a vibrant, poignant, sometimes humourous, and stunning tapestry of authentic response to being called – not just to the callings described in their stories but also in their response to the call of this event. 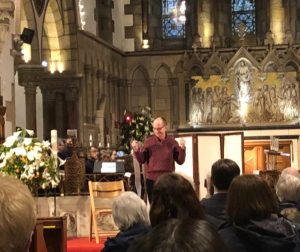 The stories and scenes emerged quite organically.  Some storytellers took the notion of ‘calls’ literally. Alan Tricker, well-known local director and actor, opened the show with his monologue on the calls of theatre – beginner’s call, thirty-minute call, ‘call backs’, and curtain calls, to name a few. This morphed into a scene-within-a-scene play rehearsal in which an actor portraying ‘Mary’ took exception to the end of Luke’s annunciation passage – with the angel leaving Mary after he just ‘dropped a bomb on her’.[1]  Kiefer also played with the literal notion of calls in the middle of a three-part angel parody, brilliantly acted by Alan Sunter as Gabriel and Adrian Felaar as an aspiring angel-messenger.  In the second part of this comic trilogy, Felaar attempted to call, text, tweet and message unsuspecting humans ‘below’ in an effort to reach more people.  As with the limitations of telecommunications and social media, Angel Felaar ultimately found this approach ineffective.

Also taking a literal approach to ‘calls’ was ITIA postgraduate Katelynn Carver who crafted a brilliantly vivid and relevant poem titled Airplane Modeset amid the clouds and eventual descent not only related to air travel and all that goes with it (including the man in 17C), but also to our own hopes – and sometimes failures – to rise above the reality we perceive.

Kimberly Drage and Letizia Morley both offered monologues about current revelations they have had around a calling.  Drage has come to understand her current calling as learning and living the serenity prayer.  She poignantly portrayed this revelation amidst the context of winning her inheritance (her grandmother’s ring) as a lucky draw, realising she didn’t choose it, she won it, just as she did not choose the family she was born in to.

Morley described the struggle of what feels like competing calls – that of mom vs artist – in a realist and humourous way, just as she did with her comics in the art exhibit.  She recounted the story of a day these two literally came to a head, when she found her son colouring all over her artwork!

Local playwright Catriona Scott crafted a moving and simple piece about Patrick Hamilton and his fateful decision to return to Scotland from Germany. Deftly acted by Scott (as Hamilton) and Sunter (as his friend Franz), the scene was an intimate look at Hamilton’s ‘call’ to spread the gospel abroad, along with Luther’s and Tyndale’s teachings, even when facing certain death. 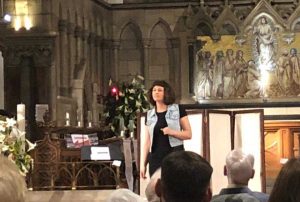 Annie Dimond, a postgraduate in the Logos Institute, shared a both fun and serious story about her summer as a missionary doing street ministry in Denver. At times both heart-warming and heart-wrenching, Dimond’s flair for wit and humour won the day as she told the story about a duck – two of them, actually – both wanted, found and lost. Annie told the story with the dramatic help of Davis Meadors and Truce Jack. The story culminated with the serendipitous and providential meeting of two people who needed to find each other… for the duck’s sake as well as their own.

This also proved a teaching moment for Angel Felaar who came to realise that the important part of a call is not so much the announcement as what humans do with who and what is placed in front of them (even a duck).

The final piece demonstrated what Jill Anderson did and continues to do with who and what is placed in front of her after the call.  Sharing her gripping and devastating story about not being approved to continue the track to priestly ordination, Anderson described her realisation that her calling was beyond feeding people at a communion rail.  She was to help carry communion into the world, through community meals and the services that the community hub, which she directs, provides with their mission to gather the community together.  Anderson did that literally during her monologue, as cast members answered her call to community fellowship by joining her onstage, with bread to break and share with each other, the audience… and the world.

… not at all dissimilar to ITIA’s mission with theology, imagination and the arts – in the world.