Michael Candelaria’s basic premise behind his book The Latino Christ in Art, Literature, and Liberation Theology is that there has been a dearth of keen explorations within theological texts on Christ and culture regarding Hispanic/Latino/a Christologies, even as many Latino theologies overlook a distinctly Latino Christology. As Candelaria puts it, ‘this book is a study of unconventional cultural expressions of Christ in Latina/o art and literature’ which is structured under two regulative ideas as an interpretive framework: ‘representations of Jesus/Christ [that] result from projections of human self-understanding’ and ‘images of Jesus/Christ [that] express some ideal or idea’ (4-5). Though he often addresses historical theology and biblical scholarship, Candelaria claims that the book is not intended as a theological work but rather a focused attention on ‘outliers’ in art, literature, and theology, the unconventional and imaginative wisdom from Hispanic/Latino/a creators. Indeed, an admitted ‘quasi-historical materialism’ informs the work (5). 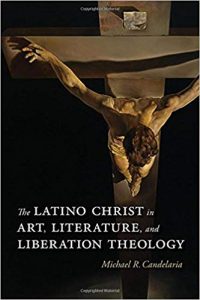 The chosen artists and theologians are a wonderful, rich mosaic of well-known Hispanic/Latino/a creators and thinkers: Spanish painter Salvador Dalí, Mexican muralist José Clemente Orozco, Argentine writer Jorge Luis Borges, Spanish existentialist writer Miguel de Unamuno, Brazilian liberation theologian Leonardo Boff, and Mexican-American writer and scholar Gloria Anzaldúa. Others are less well-known (at least to me) but equally worth our consideration: New Mexican author and priest Fray Angélico Chávez, Argentine writer Ricardo Rojas, Mexican philosopher José Vasconcelos, and Mexican-American theologian Virgilio Elizondo. I was introduced to both Orozco and Unamuno through this book, and Candelaria’s description of their ideas has piqued my interest and prompted me to further explore their works. Orozco’s impressive murals which transpose Christ with the Greek Prometheus and the Aztec Quetzalcoatl are a fascinating blend of divergent cultural aesthetics, while Unamuno’s ‘quixotic Christ’ exemplifies the Spanish/Latin American philosophical paradigm, what Candelaria describes as ‘quixotic, anti-intellectualist, other-worldly, idealist, voluntarist, and vitalistic’ (100).

Candelaria devotes a single chapter to summarize each of these particular artists/thinkers. He often takes an auteurist and intentionalist hermeneutic, devoting as much (if not more) of his attention to artists’ biographies as to their actual works. This heavily biographical approach leaves little space for interpretations of the artworks or theologies themselves, and the analysis is often more summarized description than analysis. Little attention is given to audience reception or experience of paintings and writings. The structure of Candelaria’s explanations is quite scattered and vague; often entire chapters are under a single heading (e.g. Chapter 7: Liberation Theology) and the book is filled with unnecessary and under-explored tangents which can leave the reader wondering where the meandering logic is headed. For instance, in writing on Fray Angélico Chávez’s interpretations of Salvador Dalí’s The Madonna of Port Lligat and the painting’s Virgin Mary and Sphinx imagery, Candelaria chooses to add, ‘By the way, the word sphincter derives from the name Sphinx’ as a strange aside. He then makes a contentious claim about the artist’s intentions: ‘Curiously, he [Chávez] regards the Virgin as real and the Sphinx as mythical. He does not acknowledge that the Virgin is just as mythical as the Sphinx. Therefore, as mythical characters they share more in common than Chávez recognizes’ (49). The argument that Mary the mother of Jesus and the Egyptian Sphinx are equally ‘just as mythical’ is problematic, but Candelaria simply moves on to continue his summary of Chávez’s writings. As another example, Candelaria begins his chapter on Richard Rojas (called ‘Ricardo’ in the Introduction) with essentially no biography or introduction, instead diving immediately into a lengthy summary of Rojas’s 1928 work, El Cristo invisible, while never noting or addressing Rojas’s two dozen other major publications or giving us much context for the work at hand. Sometimes Candelaria reads too much of an artist’s biography into his or her work; at other times, he ignores biography altogether.

Though minor, there are also enough grammatical errors and awkward sentence structures to become a distraction from Candelaria’s main points. On Borges, Candelaria writes: ‘Blindness overtook the father, eventually Jorge, too, would lose his sight’ (124). Or, on liberation theology: ‘By the1980s, [sic] it seemed obvious that the only consensus on a Latin American Christology was that there was no consensus except that Christ represented liberation. What kind was disputed’ (172). Sometimes citations are missing for key texts. For example, in arguing that Gustavo Gutiérrez universalizes the incarnation of Christ until it ‘loses concrete relevance’, Candelaria briefly quotes Gutiérrez’s claim that ‘humanity, every man, history, is the living temple of God’ without giving any context or cited reference (184). Perhaps the criticism should be directed more to the editor and publisher than the author; in any case, an otherwise intriguing book is hampered by these peccadillos. As these sorts of examples occur within every chapter of the book, it undermines Candelaria’s goal of offering good reasons why we should pay more attention to such imaginative and profound theological considerations of Christ from a Hispanic/Latino/a perspective. Indeed, the artists, philosophers, writers, and theologians listed in this book are all very much worth our consideration, so it’s disappointing that Candelaria’s book isn’t more robust and refined in its interpretations of these great Latino thinkers and their conceptions of Christ.

0
Facebook Twitter Pinterest
LinkedIn Email
Written By
Joel Mayward
More from Joel Mayward
At the Kunsthistorisches Museum in Vienna, there is a room featuring a...
Read More