Annie Konzelman uses a controversial chapter from Dostoevsky’s Demons to raise important, thought-provoking questions about the value of “bad” art, in the next article in our series on banned books.

As an undergraduate studying Comparative Literature, banned books were often on my reading lists. The most memorable of the these for me was Fyodor Dostoevsky’s political novel Demons, sometimes translated as The Possessed or Devils. While not banned in its entirety, one chapter from the novel was refused by the magazine The Russian Messenger, which originally published the novel serially. The expunged chapter, ‘At Tikhon’s’, wasn’t published in Dostoevsky’s lifetime but now appears as an appendix in most contemporary editions after having been discovered in 1921.[1] 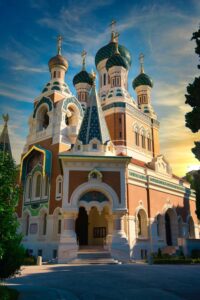 Why was the chapter ‘banned’? Spoiler: because it details a character’s confession to the rape of a young girl and his subsequent involvement in her suicide.

The chapter begins with Nikolai Stavrogin, the one making the confession, going to a monastery to meet with a retired bishop, Tikhon. Stavrogin gives Tikhon a written confession of his ‘crime’ that he intends to distribute in Russia and abroad in the hopes it will help him achieve repentance. Most of the chapter is comprised of the written confession but is also bookended by conversation between Stavrogin and Tikhon, which functions as a kind of commentary on the confession and brings in the themes of repentance, human dependence and Christ’s forgiveness.[2]

Throughout the novel, Stavrogin is an elusive and enigmatic character. A swirl of intrigue and gossip surrounds him, exacerbated by his apparent disinterest, and both reader and other characters rarely know precisely what he’s up to. In contrast, the confession is a first-person account, and the reader learns of these events in a notably concrete, matter-of-fact way compared to other parts of the novel. Though the content of the confession is shocking, the chapter is distinct in the amount of detail it provides. It is frank, unavoidable, revealing.

But is the only benefit of this chapter its service to the novel? It helps define Stavrogin’s character. It clarifies plot points and highlights themes found in Dostoevsky’s other novels. Despite all this, and even though the chapter may be well-written, it is ‘bad’—evil things done for evil reasons. At the very least, readers are confronted with distressing violence and tragedy they must make sense of. Worse, we might say that Dostoevsky instrumentalizes a vulnerable—even if fictional—individual, making her undergo suffering for a theological or ideological point. It would be fair to argue that Dostoevsky seems to be aiming at something ‘good’ through the conversation between Stavrogin and Tikhon, such as exploring what repentance and forgiveness in light of evil actually looks like. But does this aim justify the violence and potentially instrumentalizing implications of the chapter? 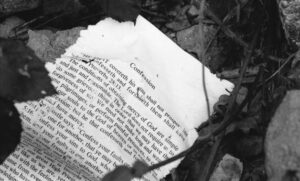 Rowan Williams offers important insight in this regard. As he understands Dostoevsky’s fiction, one of its powers is it shows us that we do not live in a static world, untouched by violence and the ambiguities of internal and external life. What we can learn from Dostoevsky, Williams says, is that, quite often, ‘it is only the working-out in imagination of the range of destructive possibilities that clarifies what is the good’.[3]

Stavrogin certainly can be described as ‘destructive’. We learn from the confession that he has done many terrible things because of the ‘unbelievable pleasure’ it gives him to commit cruelties.[4] It is true, too, that Stavrogin’s confession presents to us a picture of what is bad and so, theoretically, can help us formulate a vision of what is, in contrast, good.

This is also the case for many other banned books. The graphic novel Maus by Art Spiegelman,[5] novels like Toni Morrison’s The Bluest Eye, 1984 by George Orwell and Lord of the Flies by William Golding have also been banned, especially in educational contexts, for unsuitable or difficult subject matter—depictions of evil enacted and experienced. 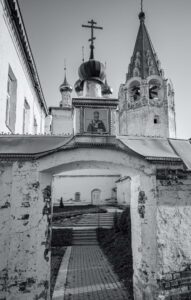 Williams is quick to note that Dostoevsky is not suggesting we need evil, either in fiction or in actual life, to know and do what is good. We shouldn’t seek to justifying evil by instrumentalizing it. Fiction does, though, allow us to analyse, explore, criticize and evaluate the world we inhabit. But is this suggestion, that we should continue to read these books because the evil depicted inside also occurs outside, satisfying? What, exactly, is bad art good for?

One reason we may find a heuristic approach initially insufficient is because, when we try to make a case for banned books or ‘bad’ narrative content, we’re not just talking about bad art. If we conclude that the expunged chapter of Demons can have a positive valuation, it is because we have also considered what art, not just ‘bad’ narrative, is good for.

There are, in fact, many other ways art can influence us. For instance, Alain de Botton and John Armstrong propose a ‘therapeutic’ view of art, noting seven key ways art often affect us: remembering, hope, sorrow, rebalancing, self-understanding, growth and appreciation.[6] A photo of a loved one can help us remember them; a novel can help us understand the effects of certain ideologies better than theoretical discourse. As explained by de Botton and Armstrong, art has a way of making up for particular kinds of ‘psychological frailties’ or limitations in our lives, but it isn’t just one thing.[7] More likely, the effects it has on us are multiple, even conflicting or changing depending on the circumstances.

While this isn’t necessarily a comprehensive list, and perhaps risks trivializing or instrumentalizing art if we assume it all fits into tidy categories, it does reframe how we might approach banned books and art more generally.

If we ask how art can be therapeutic, we presuppose some reciprocity between art and reality.

In the expunged chapter, Tikhon seems to be more aware of this connection than Stavrogin, and his questioning of Stavrogin has as much to do with his evil actions as it does his authorial actions.[8]

‘It is as if you purposely want to portray yourself as coarser than your heart would wish,’ Tikhon says to Stavrogin after reading his confession, ‘it is as if you already hate beforehand all those who will read what is described here and are challenging them to battle’.[9]

Will Stavrogin achieve repentance through his confession? Is his confession earnest or even accurate? Does he simply want a reason to hate others more? The text doesn’t answer these questions definitively, but the significant point is that Stavrogin, as an author, assumes his narrative can affect reality. Art does not just imitate life, but, in many ways, our lives are constituted through our creative practices and our responses to art. As Williams observes of Dostoevsky’s fiction, writing and reading is something we do ‘in order to affirm something other than the world of plain facts and obvious accounts of them’.[10]

The philosopher Paul Ricoeur makes a similar claim about the relationship between fiction and our lives:

For what must be interpreted in a text is a proposed world that I could inhabit and wherein I could project one of my ownmost possibilities…Through fiction and poetry, new possibilities of being-in-the-world are opened up within everyday reality…Everyday reality is thereby metamorphosed by what could be called imaginative variations that literature carries out on the real.[11]

Fiction and other forms of art present to us different ways that we can be in world, ways that our direct experience may not make plain. As Tikhon notes rather darkly, Stavrogin is not the first to commit evil acts like this. It is a ‘plain fact’ that people commit violent actions and cause suffering, but Stavrogin’s narrative is an attempt to affirm and seek after something else. Are repentance and forgiveness—a world different than the one he has created and inhabited—possible? There is nothing about a Dostoevskian world that would suggest repentance or forgiveness in the light of evil can be easily attained, as Stavrogin’s fate in Demons shows us. It is, however, a world where those things are a possibility. We can imagine them and seek after them, even if in grotesque, disjointed and often pitiful ways.

If we consider art to have theological or religious import, we learn from Dostoevsky’s fiction that art isn’t significant because it relays to us factual information or confirms views we hold about the world, God or what is ‘good’ and ‘bad’. It is, instead, significant because it is one of the means through which we arrive at these conclusions. Art displays, one might even say reveals alternative worlds where good and bad ways of being abound, and theological discourse should be able to contend with the complex and continuous dialogue art prompts.

‘Bad’ art can help us to consider bad actions, the suffering and evil that is present in and among us all.

What the expunged chapter from Demons and the phenomenon of censorship indicate to us is that these ‘imaginative variations’ and our responses to them are very rarely, if ever, neutral. It seems what we think art is good for correlates to what we want to use it for, for what we think is good. Not good in the sense of ethically good or charitable, but in the sense that it accomplishes whatever we have decided is desirable or, at the very least, necessary. A text need not be totally ‘good’ or totally ‘bad’, nor our interpretations or responses.

‘Bad’ art can help us to consider bad actions, the suffering and evil that is present in and among us all. More than this, though, the expunged chapter indicates to us what is at root of the question. What do we think art is even for? As Dostoevsky seemed to know, it’s difficult to answer this question without first considering what exactly we think we are for, what we should do or what we should be.

[1] For a detailed account of the chapter’s history, see “Exile’s Return” in Dostoevsky: A Writer in His Time by Joseph Frank, ed. Mary Petrusewicz (Princeton: Princeton University Press, 2010), 616-625.