Magda Andrews-Hoke describes how composing her poem Throughline helped her to ‘understand time and crisis’ during the pandemic, in the latest of our series of artist reflections connected to the Transept ‘Interface’ exhibition.

When I was considering how to approach the theme of Transept’s 2022 exhibition, ‘Interface,’ several images first jumped to mind. I thought of screens, I thought of the mediating force of screens like stained glass windows – surfaces that capture some of reality but filter it for us, sometimes in a beautiful way, sometimes in a way that seems partial and diminishing. I wanted to make something that captured the essence of this. But mostly, as I discussed the theme with fellow artists, ‘Interface’ seemed to be begging for a genuine appraisal of the ways in which the pandemic has affected us. The way the experience of dizzying change and loneliness passed a scrim between our eyes and the world, making us re-evaluate our sense of ourselves and our relationships, and even of reality itself.

As the exhibition approached, and as I tried to plan and create a work of art inspired by these themes, I realized that I had already been grappling with some of these questions in private writing. In November 2021, as I was becoming more acclimatized to St Andrews, and beginning to blur and forget some of the acute difficulties of the years before, I opened a Word document, with a purpose. I would write a poem – one, single long poem – for as long as it took to feel that I had carried myself into a new world, into a new phase of my life.

This idea was inspired by the poet A R Ammons, whose long poem Tape for the Turn of the Year was written on a typewriter on a 175-foot-long strip of adding-machine tape, only about 2 inches wide. Ammons’s Tape for the Turn of the Year is like a calendar or a clock – ‘an alternative timepiece that runs on writing.’ Its purpose? ‘A bridge across the dreary days of winter, a period Ammons associated with depression.’[1] My purpose was similar. To carry myself on the flotation device of a form into a new time of year, a new phase of life. To ride the current of dislocation towards slow repair. 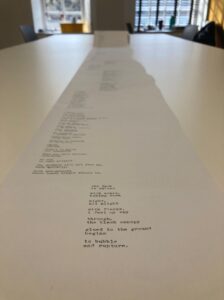 In some ways, the Word document I opened felt more intimidating than Ammons’ adding-machine tape, which was only 175 feet long, as opposed to a Word doc’s almost bottomless infinity of pages. I wanted to maintain some of the spirit of Ammons’ poem by tightening the margins. Each line is a maximum of about two inches wide, set at different indentations across the page. And although the poem was composed in Word, I ended up typing it out on a typewriter, since it seemed the only way to achieve the long, continuous, scroll-like quality of the work. This gave the poem the all-important tactile reality that I wanted for it.

When the pandemic was only beginning, I made a calendar for myself. Along the wall of my room, from left to right, I tacked up several pieces of paper, with the dates of the month along the top. Along the left-hand side were a list of activities: play the guitar, go for a walk, cook a nice meal, call a friend. Every time I did one of these activities, I would place a check mark next to it for that day. I kept adding paper for several months, until the calendar began to wrap around the corner of my room on to the next wall. That was when I realized that this wasn’t some temporary instant of crisis that I could walk myself through by means of a normal timeline.

Over the course of the last few years, many people have felt a sense of dislocated time. This is largely anecdotal, but the distances between events in quarantine seem, according to friends and family, and my own intuitions, absurdly long or short. Events that ‘should have’ transformed into memories might stick around in more visceral ways instead, since day-to-day life was so unchanging for many people for so long. In his book ‘Vertiginous Life,’ St Andrews-based anthropologist Daniel M Knight describes this well: a ‘Time of Crisis’ is one in which ‘time becomes elastic, the world is spinning, there is an apparent shift in temporal rhythms, and material objects, sights and sounds become uncanny. There might be the sense, the feeling or atmosphere of epochal change, nothing will ever be the same …’[2] This, Knight says, is why so many people describe times of crisis and personal upheaval as creating a kind of acute temporal vertigo and nausea. This is what I hoped to grapple with and to forge into a bearable, legible form in Throughline. 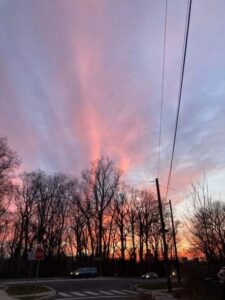 Composing Throughline was cathartic for me in this respect. It seemed to repair my relationship with time somehow. I wrote it over the course of November 2021, with the Word doc perpetually open on my computer, inviting me to write a few lines whenever I wanted to do so. As a result, these quasi-journal entries capture different parts of the week, times of day, moods. As I wrote it, I felt less confused and estranged from time. I felt the rhythms of my week, the rhythms of the turn of the sun, begin to act more ‘normal,’ not so giddy and vertiginous.

View Throughline and the rest of the Interface exhibition here.