Kieran Gaya explains how his piece Two-Faced engages with the theme of Interface, in the next instalment of our series of artist reflections highlighting the Transept Interface exhibition.

I have always been fascinated by iconography that is designed to bridge the physical and spiritual realms. The artist gets to carve out a window for viewers to look through or establish a passage that leads the way to places of the imagination. Encounters happen and dialogue results. These icons can come in the form of two or three-dimensional art pieces in the shape of paintings, sculptures, and also as installations or performances, whether musical or theatrical with dancing worked in.

Triptychs and diptychs hold a particular charm and attraction for me because so many of the historical ones have stood as altarpieces connecting the congregant with the object of worship and beyond. These were often designed to be portable and the carrying cases or containers, even the backboards, tended to also have images on them, although usually more decorative and less hagiographic in subject. As a musical and theatrical tribute to my fascination with triptychs, Puccini’s opera comprising Il Tabarro, Suor Angelica, Gianni Schicchi, as variations of moral tales would play in the background should I ever design and build a stand-alone one-in-three. 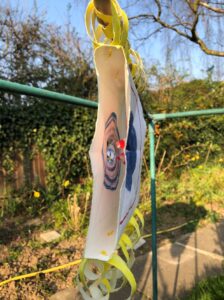 My processes for Easter Week’s Transept exhibitions at Saint Andrews, since 2019, have had revelation as a running theme. The first was a knitted and woven hanging tapestry diptych folding over from Christ in Limbo to Resurrection. The following year, I stitched a collage of cut-up clothing into a stained-glass porthole window of contemplation, representing journeys between geographical exterior places and psychical inner worlds. My piece for 2021, sculpted using slivers of tree-bark, was entitled ‘Nest Egg’ to symbolise the before and after, from conception to birth, of beginnings and endings that are doorways into subsequent stages of life: the cocoons that birth transformation. 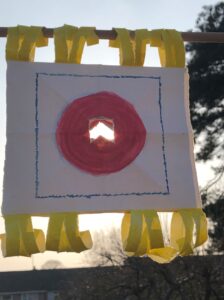 As I mulled over what would be my contribution to the Interface Exhibition of 2022, I felt that I wanted to stay in theme. Entering and exiting spaces physically and metaphorically, emotionally and viscerally, passing through or crossing over would be the point of departure. We have been in lockdown and continue to communicate through a computer screen or by video-calls on a mobile phone. We are masked and have to interpret the crinkles of eyes we see to understand that smiles are being conveyed. We have to look deeper and reach in to understand what is being shared in reality rather than depending exclusively on what we think to perceive visually. The faces we encounter are often not the whole picture but merely just one facet of the story.

Lucio Fontana (1899-1968), the artist founder of Spazialismo (Spatialism), made history by violently slashing canvasses painted in monochromatic tones, or poking holes into these, as well as into his ceramic relief pieces. His contribution to the White Manifesto published by the Altamira Academy of Buenos Aires, Argentina, in 1946, was that: ‘Matter, colour and sound in motion are the phenomena whose simultaneous development makes up new art’.[1] His ‘Tagli’ (‘slashes’) and ‘Buchi’ (‘holes’) punctures were a way to make more evident the spaces between the outsides and insides of membrane surfaces upon which one creates art.[2] There are a few instances where the presence of God is evidenced by wind, a mighty one or a gentle breeze. Air blowing through fissures and cracks, reeds and bones makes whistling sounds whereas the same hitting upon stretched out skin, a membrane per se, emits resonance. A personal journey into transcendent spaces can happen through encountering sound generated by wind passing through a punctured object. 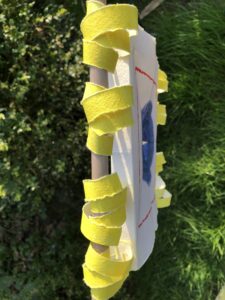 For my Interface contribution, I decided to use Indian Rag paper hand-made from recycled cotton clothing as my base and to stain it with Japanese inks. Slashes, in my case, are as organic as possible, implied by longitudinal folds as well as evident through rips and tears done by hand. I decided to stick to monochromatic variations of primary colours: red, blue, and yellow.  Since my research involves Pakistan, where Mughal miniatures continue to be admired and prized, I was inspired to draw a small rectilinear frame that contains the circular story being told, a jagged hedge sheltering a fluctuating realm. They stand and move in flux to inner and outer forms of gravitational pull.

My being both an artist and architect are showcased in how, here again, form and function work together structurally to shape the whole.

There are two faces to the piece thus creating a diptych duo. Inward facing folds on one side, and outward facing ones on the other, imply a sort of punch to the face, a dent on recto and verso. The same surfaces are also punctured and the folds of the torn paper on one face go in and come out on the other passing through the space in between. The colour scheme is also a form of complementary to enhance contrast and continue the play of ‘chiaroscuro’, light and dark sides. The blue face has a spiralling red recto while the red face has a blue verso. The two faces are held together by flattened DNA-like ribbons, ripped and stitched together almost chaotically as by primal forces at play. These also provide the support needed to hang the diptych in similar manner as genes frame our unicity and yet also our inter-relationality. My being both an artist and architect are showcased in how, here again, form and function work together structurally to shape the whole.

View Two-Faced and the rest of the Interface exhibition here.