I begin with a seemingly-dispirited and rather cliché proposition: life is messy.  Dull though the phrase is, the rest of this essay could be spent elaborating on but a few of the many interesting things contained within and between those three words and still fall well short of exhausting it.  Instead, however, I will describe my submission for the 2022 Transept exhibition, which may even, if obliquely, reframe my starting cliché.

By way of a preface to what I write below (and in connection with what I’ve written above), I offer a disclaimer that this artwork may fail.  In spite of the experiments and preliminary sketches, the proposals and checklists, it will only be constructed—in situ—on the opening day of the exhibition.  The piece could go, shall we say, awry. 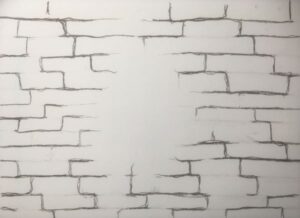 With that disclaimer out of the way, as a starting position for what comes next, I include here my initial proposal to All Saints’ Church (the exhibition venue) for their approval of my use of their floor:

Charcoal lines, drawn.  Vine charcoal lines delicately drawn from the edges of the room to just where the wear pattern begins (ie: on the still-smooth floor boards).  Charcoal is a medium which I use extensively, both for its aesthetic starkness and for its resonances with decay and the cycle of life. I currently have work being installed in Saint Andrew’s Episcopal Church during Lent which utilizes charred branches, and I am working on a proposal for the St Andrews Botanic Gardens which would also use charred branches.  Thus, this medium would serve to link these three locations.  I have tested charcoal on the smooth floor and have been able to remove it without problem.  My lines would be rather few and delicate, subtle, limited to tracing the edges of each floor panel in a type of mycelial network-like grid nearing (but not reaching) the centre.

That’s all fine, as far as it goes.

What’s more, the idea for the piece, should it work, is about the interface between the human community and the non-human building of All Saints’ Church hall.  This piece is also an attempt to make a horizontal, floor-based work; a time-sensitive, dynamic work, and ultimately a work which challenges both the natural/built duality and the surface/atmosphere duality.  A lot of theoretical weight rests upon some as-yet-undrawn charcoal lines.  It’s worth reiterating that this artwork may fail.

Yet one important detail I (albeit unintentionally) neglected to include in the initial proposal is that I anticipate the charcoal lines will smudge and blur as foot traffic proceeds over them.  Straight lines, scarcely seen to begin with, will be wiped askew and awry, or completely away, leaving intact only those at the edges.  This blurring is intended: I hope to highlight wear patterns, the slow unwitting sculpting of the surface by the those of us inhabiting the hall.  ‘Inhabitants’, writes Tim Ingold, ‘make their way through a world-in-formation rather than across its pre-formed surface’.[1]  The hall is in formation, and not just from the temporary shuffling of artworks and furniture and bodies in the space.  The perception that we creatures tread neatly upon the stiff outer crust of the world, distinct and upright, is misleading; even given such a perspective, we all eventually go horizontally into the earth.[2]  Rather, the floor of the church hall (in this particular case) ‘no longer appears as an interface separating [land and air], but as a vaguely defined zone of admixture and intermingling’.[3]  The place is porous and lively, and we are more entangled in it than we assume!

Granted, my ephemeral charcoal grid upon a compressed cardboard flooring is not exactly the boreal forest floor which Ingold goes on to describe, with its ‘impenetrable mass of tangled undergrowth’.[4]  Yet the point remains, and perhaps with more power due to the relative coherency of the flat surface in the church hall: we are human, of humus, bound and tangled into the created order of things.  Our lives don’t happen separately from the world around us, however unaware we may be.  Using Ingold’s senses of the terms, we inhabit the world rather than merely occupy it.[5]

In the end, this piece may not go as planned, which is wonderful. 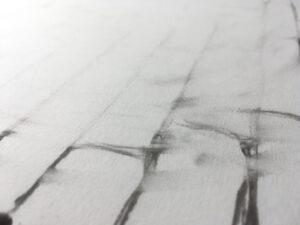 As it is, the hall actually is, I argue, amassed with undergrowth, and we are a part of it.  In terms of the Interface exhibition, where one artwork ends and another begins, or where the viewer and artist begin and end, will be made wonderfully unclear, as (among other works) the charcoal mycelia underfoot proclaim.  Perhaps time itself is the main variable, as who and what was in place will change, and always has changed.  Place, writes Robert Pogue Harrison, ‘is where time, in its human modes, takes place’.[6]  Intriguingly, that phrase ‘takes place’, may refer to both when, and where.  Whether we agree with Harrison’s definition of place, the taking place of our exhibition in the church hall into Holy Week 2022 is full of countless, tangled interfaces with past, present and future.  Human modes of time or place are storied modes, symbolic modes.  Palm Sunday, which falls during our exhibition, remembers the story and symbolism of another ephemeral emplacement of stuff-on-the-ground, another example of foot traffic proceeding over; it gestures toward another going-into-the-earth.  One could say the wear pattern of the taking place of Easter has established itself in our calendars, as we annually circle back around that story which has been told and retold through the generations.[7]

In the end, this piece may not go as planned, which is wonderful.  That my charcoal floor-based piece is so tentative, subject to numerous contingencies, all-the-more resonates with that entangled, symbol-filled perspective I have described.  Life does not occupy the surface, nor does it abide by the grids and charts and calendars of modernity’s hubris. Instead, floors wear down, timelines drift and sever, initial attempts fail, and somehow we are surprised by it all.  It is in that sense that the piece cannot fail, because it will take its place (in time and place) in an always-already messy world, storied, lively and spirited, where even death itself gets wiped askew, awry, and completely away.

[2] Of course, one of the important convictions of the Christian faith is that we also all rise again, though, needless to say, what that looks like exactly is less clear.

[7] This isn’t the place to do more than mention the long, destructive historical conflicts around the dates for Easter, though even that messy history illustrates the point, as the story does not fail.