Today, Transpositions is delighted to kick off an eight-week series on The Saint John’s Bible. For those unaware, The Saint John’s Bible is the first handwritten, illuminated Bible of its scale in over 500 years. The Bible gets its name from the Benedictine abbey and university which commissioned it: Saint John’s Abbey and Saint John’s University in Collegeville, Minnesota. The abbey founded the university and its graduate school, Saint John’s School of Theology and Seminary, and is surrounded by the campus. 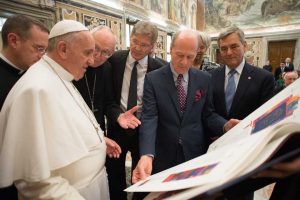 In 1995, Donald Jackson, Senior Scribe to Queen Elizabeth II, presented his lifelong dream to handwrite and illuminate the Bible to the abbey and university. In 1998, they commissioned Jackson to begin the project, and on Ash Wednesday in 2000, he drew the first words: ‘In the beginning’. Eleven years later (2011), Donald and his wife, Mabel, presented the final page of The Saint John’s Bible to the abbey and university. Accompanied on three occasions by the Abbot and University President, Jackson also presented copies of individual volumes of The Saint John’s Bible to Popes John Paul II, Benedict XVI and Francis.

Six calligraphers, including Jackson, handwrote all 1,150 pages on approximately 300 sheets of calfskin vellum. A Jewish scribe drew the Hebrew script, and six artists, including Jackson, created over 160 major illuminations. The 73 books in The Saint John’s Bible are organised into 7 volumes and use the 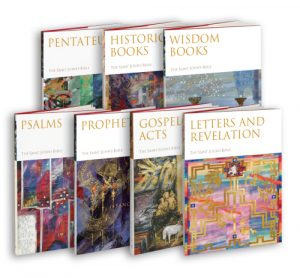 NRSV translation; the art of The Saint John’s Bible is inspired by artistic traditions from around the world. [1]

As a graduate of the School of Theology and Seminary at Saint John’s, I am immensely grateful for the project, process and product of The Saint John’s Bible. It largely impacted the culture on campus and at the abbey, and it figured within many facets of the student experience there. It not only entered into exegetical consideration of biblical texts in Old and New Testament courses but became part of the ecclesial life of the community as well. Reading from the three-foot by two-foot heritage edition at special feast days was an exceptional experience on both a visual and physical level. Turning the immense pages, replete with illuminations that often reflected images local to the place where it was created and proclaimed (Central Minnesota), gave an added weightiness, significance and effort to proclaiming the Word. It was easy to imagine that this might be the way the Bible was meant to be proclaimed and experienced.

Another striking aspect of The Saint John’s Bible for many, in addition to the beautiful illuminations and handwritten text, is the very earthy, gritty process by which it was created. The calligraphers and illuminators quite literally ‘got their hands dirty’ as they worked on calfskin vellum with hand-carved quills, using hand-mixed ink pigments with egg yolks. In other instances, they worked very delicately 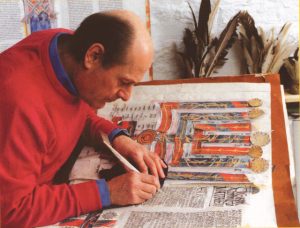 with gold leaf in majestic lettering and images. This at once very transcendent and very gritty, earthy process was quite a spiritual experience for Jackson and other scribes, who, working on the imperfections of animal skin, had to remain open to how the words and images emerged on the page. Jackson commented, ‘The continuous process of remaining open and accepting of what may reveal itself through hand and heart on a crafted page is the closest I have ever come to God’. Expect to hear more about the calligraphers’ experience in this series.

Since The Saint John’s Bible was completed, a number of books have been written about the project by those involved. Recently, however, two new books have been published about it by authors outside of the project and the process, with broader and more direct application in the world. Reviews of both books will be included in this series, as will be a commentary by one of the authors; a reflection from Anne Kaese, a calligrapher working with The Saint John’s Bible since the first volumes were released; Visio Divina reflections on three of the Gospel illuminations relevant to the Incarnation and Nativity; and a conversation with Fr Michael Patella, OSB, Chair of the Committee for Illumination and Text of The Saint John’s Bible.

The mission of The Saint John’s Bible is to ignite the spiritual imagination of people around the world of all faith journeys. As an integration of art, religion, spirituality and imaginative interpretation, it is difficult to imagine a more appropriate item to highlight in Transpositions, the online journal for the Institute for Theology, Imagination and the Arts.

Eric S Fought, MDiv and alumnus of Saint John’s School of Theology and Seminary, begins the series with a review of Illuminating Justice: The Ethical Imagination of The Saint John’s Bible, by Jonathan Homrighausen.