Editor’s note: This review is part of our series on The Saint John’s Bible. For Associate Editor Karen McClain Kiefer’s introduction to our series, see here.

Since the completion in 2011 of The Saint John’s Bible, the first handwritten, illuminated Bible in 500 years, much has been written about the project, mostly by those who were involved in its creation. In Illuminating Justice: The Ethical Imagination of ‘The Saint John’s Bible’, a new voice enters the conversation and offers important insights and tools for consideration: Scripture scholar Jonathan Homrighausen. 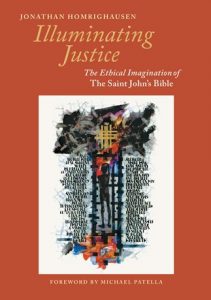 Those who are unfamiliar with The Saint John’s Bible will find here a wonderful overview of the vision of the monks and all those who worked together to bring the project to life. And, as is the case in other books published previously by The Liturgical Press on The Saint John’s Bible, Illuminating Justice features many wonderful full-colour examples of illuminations and text treatments that grace the book’s vellum pages.

The thoughtful overview and images are reason enough to explore this volume. However, Homrighausen has also offered us an opportunity to dig deeper, to explore more fully what The Saint John’s Bible offers those who approach it. And in so doing, he continues in the spirit of what the monks, scholars and artists intended—creating space, space for ongoing interpretation, space for application, and space for spiritual inspiration. 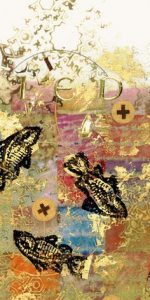 Homrighausen walks us through three such canonical conversations, each well researched and beautifully framed in the context of the ‘tree of life’ motif. First, he explores the family tree of Jesus, and the right relationship between Christianity, Jews and Judaism. Secondly, he tackles the ‘Tree of Knowledge, Tree of Life’, and the ways in which women, Wisdom, and gender enter the conversation. Thirdly, Homrighausen welcomes us into a discourse on ‘Every Living Tree’, considering the ways in which The Saint John’s Bible promotes creation care.

At first, I really struggled with the fact that Homrighausen, in choosing a title such as Illuminating Justice, seemed to ignore, or not specifically address, some of the core tenants of Catholic Social Teaching, and more broadly the tradition of Christian social thought overall. There is, for instance, no discussion of the preferential option for the poor here, or a specific undertaking to consider poverty directly. Nor does the book address current hot-button issues such as immigration, abortion, health care, racism, or the death penalty. As a ‘social justice Catholic’, I found this to be quite disappointing.

However, as I continued to read and reconsider Homrighausen’s choices, I realized that in many ways he was embodying the intentional creation of space alluded to above. And, through his focus on interfaith dialogue, women, and creation, he opens the door for the consideration of other topics, both through those three themes and through one’s own reflection and practice of visio divina, which The Saint John’s Bible offers us. Like the familiar and ancient practice of lectio divina, visio divina is a prayerful way of approaching a text; in the case of an illuminated Bible, the texts in play are the images, or illuminations. The visio divina process has six steps: listening and meditating on Scripture, seeing with eyes of faith as you gaze on a particular illumination, praying to God, contemplating the Spirit’s movements, and reflecting on how you might further become Christ-like because of the reflection. [1]

Thus, Homrighausen provides the opportunity to consider poverty through the women featured in The Saint John’s Bible and the way gender is presented throughout the project. The same could be true for other examples of our time, for instance, how immigration is viewed by reflecting on the beauty and complexity of God’s creation, or how we might find common ground in our public life by reflecting on the ways in which interfaith dialogue is addressed. The opportunities for reflection are indeed limitless, and the invitation ongoing.

Michael Patella, a monk of Saint John’s Abbey and the head of the committee which oversaw the creation of The Saint John’s Bible, writes in the book’s forward, ‘Initially the idea was to do something grand, not simply write a Bible by hand and to include some good artwork’ (ix). Illuminating Justice proves that such a grand idea continues to be realized, and in it Homrighausen provides the space for each of us to be a part of it.

[1] For more information on the process of visio divina and engaging with The Saint John’s Bible, visit the Seeing the Word website: http://www.seeingtheword.org