Last autumn, I visited a large congregation in London while on a research trip. The church’s leadership team graciously permitted me to examine their historical archives, and significant church members even provided me with a home-cooked meal. I was impressed with their earnest desire to help me, despite the fact that I was a complete stranger to them.

The generosity of the church’s members, as well as the congregation’s rich history, compelled me to participate in one of their Sunday morning worship services. However, I must confess that soon after the service began I was simply too shocked to worship properly. I did not expect a church in central London to be so, well, conservative. All the men in attendance sported dark suits, and I think every woman present wore a nice dress. Not a single person I met, not even the members of the young adult group, had on informal attire or even khakis. 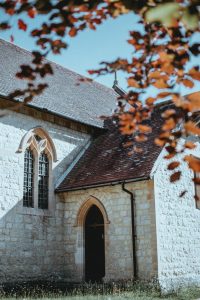 The sanctuary itself was sparse; only a single scripture verse on the back wall served as a decorative piece. During congregational singing, the church used only minimal musical accompaniment (at best) because the pastor explained that ‘contemporary music’ was sinful. Such music, he claimed, unhelpfully stirred the emotions and prevented rational thought.

While I found all these features rather fascinating, I suspected at first that I did not hear the pastor’s words about contemporary music correctly. So, after the service, I quickly made my way to the bookstall—out of curiosity more than anything else—and picked up a copy of a small booklet that presented itself as a theology of music.

In that work, the pastor argued that his readers must consider any mention of musical instruments in Scripture—including the list of instruments found in Psalm 150—as allegorical because surely God would not sanction uninhibited commotion in a worship gathering. The irony here did not escape me. In every other way, this congregation would want to hold passionately to what it would call a literal reading of the Bible—but on this particular point it quickly appealed to allegory.

The concept of allegory reappeared after the service while I had dinner with members of the church leadership team. An elder explained to me that the church required new members to read significant theological works soon after joining. As he listed out the lengthy systematic theologies and surveys of church histories that are on their reading lists, he mentioned briefly that they also required John Bunyan’s Holy War for matters related to ‘practical Christian living’. I immediately froze.

Here was a church deeply committed to communicating truth claims by means of direct assertion. Its sermons were heavy on didactic material. Its music ministry attempted to prevent emotional experiences due to fear of distracting from ‘the message’. Its curriculum for new members sounded like the introductory systematic theology course offered at my college.

And yet, when this church explained the Christian life at its most practical level, it ran to Bunyan’s allegorising. Apparently, it believed Bunyan’s imaginative works could convey ‘practical Christian living’ more effectively than direct propositional statements.

This use of Bunyan intrigued me. Why would a congregation with this particular approach to ministry embrace allegory as a means to teach the Christian faith? More precisely, what is it about Bunyan’s allegorical texts that commend themselves to matters related to ‘practical Christian living’?

I cannot claim to speak for the church that I visited, but my time there did cause me to generate a few (admittedly basic) thoughts. I offer them here because I believe that Bunyan’s works have relevance for contemporary discussions about the role that imaginative language can play in spiritual formation. In this first part of my discussion, I briefly survey Bunyan’s comments about allegory to provide the necessary context. In the second part, I will consider the advantages that the use of allegory might offer to accounts of the Christian faith. [1]

Christian Truth ‘Under the Similitude of a Dream’

Bunyan’s most popular works are not his more traditional theological tomes. He could certainly write substantial pieces: his Doctrine of Law and Grace Unfolded, for example, offers a sophisticated and creative account of seventeenth-century covenant theology. Still, Bunyan’s readers have always given primary attention to his more imaginative texts. Grace Abounding presents his understanding of the ordo salutis (order of salvation) in a dramatic, autobiographical fashion. 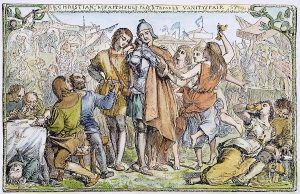 Pilgrim’s Progress, Bunyan’s most well-known work, explores Christian discipleship and justification by faith by means of allegory. Holy War, meanwhile, details covenant theology and the outworking of redemption in human history by telling the story of a fictitious battle for the city of Mansoul (i.e., Man’s soul).

The preface to Pilgrim’s Progress offers perhaps Bunyan’s lengthiest consideration of allegory, and it famously begins with Bunyan’s admission that he will deliver his narrative ‘under the similitude of a dream’. This image of a dream instructs his readers that in contrast to Grace Abounding, Bunyan will not in this work concern himself with documenting historical events. He will instead deliver his tale with words that critics might deride as ‘dark’, that is, words that employ allegory. [2]

For Bunyan, dark words are not necessarily untrue words. He argues that although allegorical language can at times point to unclear referents and generate confusion, it can also ‘make truth to spangle, and its rays to shine’. [3]

He therefore encourages his readers not to concern themselves with the nuances of his story but to consider the broader theological truths that he wishes to impart.

This close connection between allegory and theological instruction remains Bunyan’s chief concern. As Davies explains, the point of Bunyan’s remarks is not ‘to sanction any extravagance of the imagination’ but merely to justify the use of a creative way to convey Christian truth. [4] In short, Bunyan employs the use of \allegory with a particular end in mind—providing his readers with instruction in Christian truth.

For this reason, the London church members I recently visited find Bunyan a figure worthy of study. He shares with them a didactic approach. Both Bunyan and the London church members use allegorical language in a purely instrumental manner—to convince and instruct. While not everyone will appreciate their method, it is not an uncommon one in the Protestant tradition.

The question remains, however, as to why Bunyan would prefer allegory over competing methods. In his preface to Pilgrim’s Progress, he stated that allegory could cause truth to shine more brightly. I will consider why he thought so—and give particular attention to his Holy War—in my next segment.

[1] I openly acknowledge that throughout these posts I draw heavily from Bunyan’s own remarks about the use of allegory and from the writings of contemporary Bunyan scholars such as Richard L. Greaves and Michael Davies.
[2] John Bunyan, Pilgrim’s Progress (Harmondsworth: Penguin, 1987), 5.
[3] Ibid.
[4] Michael Davies, Graceful Reading: Theology and Narrative in the Works of John Bunyan (Oxford: Oxford University Press, 2002), 216. For the sake of space, I have not addressed Davies’s remarks on incremental versus substitutionary understandings of allegory or Davies’s interactions with the work of U. Milo Kaufmann. Obviously, the quote I supply here relies heavily on this background material; interested readers should consult Davies’s text for more information.