Writer and director Martin McDonagh’s newest film, Three Billboards Outside Ebbing Missouri, proved to be a critical success after being nominated for seven Academy Awards and winning two. Given its southern setting, its violence, and an explicit nod to Flannery O’Connor, it’s no surprise that Three Billboards is frequently compared to O’Connor’s Southern Gothic literature. [1] Like many of O’Connor’s stories, Three Billboards is a story about life-altering tragedy and accompanying questioning. However, unlike O’Connor, McDonagh leaves the viewer with nothing more than ambiguity and unfounded hope.

Francis McDermott delivers a gut-wrenching performance as a bereaved Mildred Hayes, a woman in small-town Missouri whose daughter Angela was raped, murdered, and burned a year prior to when the film’s story picks up. Mildred works in a tiny southern tchotchke shop surrounded by happy ceramic rabbits and novelty snow globes. The contrast between the neat rows of trite, colorful nothings and the dark chaos of Mildred’s internal struggle is palpable. 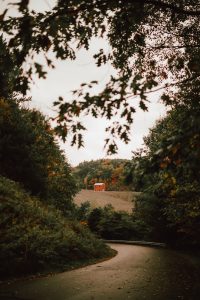 Mildred is haunted not just by the fact of her daughter’s brutal death but also by her own morbid contribution to it. Just prior to Angela’s death, the audience learns, Mildred and Angela fought. Mildred refused to let Angela drive her car. Angela stormed out, saying she hoped that she would be raped on her walk to teach her mother a lesson. Mildred called after that she also hoped Angela would get raped.

In the wake of Angela’s death, Mildred has received the blessing and curse of seeing beyond the assumptions that coloured her pre-tragedy life. She sees the racism rampant in the South, and probably sees it more keenly due to her friendship with a black woman. She sees that the police department has time to torture young black men in custody but seems unable or unwilling to make progress on her daughter’s case. She sees the corruption within the Catholic Church and stops attending, much to her priest’s consternation (it could hardly be a McDonagh story without a concerned, bumbling priest). Everything in Ebbing is flawed, prejudiced, harmful, useless, and ineffective. As a last-ditch effort to bring about some sort of justice, Mildred decides to rent space on three lonely billboards near where her daughter was killed to publicly call out the police department for its ineptitude.

When Mildred decides to rent the three billboards, she pays a visit to Red Welby, a young man who works at the local advertising agency. Red is reading a copy of Flannery O’Connor’s short story collection A Good Man Is Hard to Find. In the title story, an insufferable old woman has a life-changing experience like Mildred Hayes when she and her family become the victims of a psychopathic killer called The Misfit. At the point of the gun, the woman sees the world through different eyes. In her final moments, the old woman sees The Misfit for who he is: a human being, like one of her own children. For a brief moment, this woman who has thought of no one but herself for the entire story feels a spark of compassion for The Misfit. He promptly douses the spark with three bullets. He muses, ‘She would have been a good woman… if it had been somebody there to shoot her every minute of her life’. [2]

Given the clear genre similarities, it’s no surprise McDonagh chose to include O’Connor’s book in the film. However, the two stories, and indeed the universes the authors portray, have a key distinction. In her moment of existential clarity, the old woman in O’Connor’s tale sees past her own selfishness to the humanity of those around her. She feels compassion, perhaps for the first time in years. In her final moments as she sees reality for what it is, she wants nothing more than to reach out to the man about to kill her and show him love.

In contrast, Mildred Hayes’s newfound perceptiveness gives her a sneaking suspicion that ‘there ain’t no God and the whole world’s empty and it doesn’t matter what we do to each other’. Mildred’s improved vision is purely destructive and deconstructive. The world she now sees is empty and meaningless, filled only with people and power structures that do nothing but make things worse than they already are by nature.

Despite her best efforts, Mildred is thwarted at every turn. A single lead turns up a dead end. The local police chief shoots himself in the head before life-threatening cancer can take him. The billboards prove to be an empty symbol, inspiring outrage and conversation but accomplishing nothing of value. In the end, because there is no justice and the world is empty, the only thing left to do is travel across the country with a racist former cop to perform a vigilante execution on a suspected rapist as a cathartic scapegoat sacrifice. Will they be successful? More importantly, does this count as redemption? What follows is left entirely ambiguous, which is ‘exactly’ what McDonagh was aiming to communicate. [3]

O’Connor’s world, then, is dark and cruel, filled with suffering and death. Reading O’Connor is sobering, reminding us of the depths of evil humans can reach. Characters lie, cheat, steal, defraud, rape, and kill. Lives are lived, lost, and ruined. But all of this cruelty obscures an enchanted reality that is ultimately beautiful. O’Connor’s Catholic hope gives even her bleakest stories a twinge of loveliness. Though these narrow narratives seem random and senseless, there is something behind the stories, an animating thread that leaves open the possibility of redemption.

McDonagh’s world is dark and cruel, filled with suffering and death. But this cruelty obscures a reality that is potentially unimaginably worse. People lie, cheat, steal, defraud, rape, and kill. The existence of institutions like the Roman Catholic Church and the Ebbing Police Department preserve the imposing illusion that something like justice exists in the world and people can do something to bring it about. But Mildred learns differently.

McDonagh and O’Connor are then two writers who approach the fundamental problems of human existence through similar means: stories surrounding moments of tragedy or breakdown and the questioning that comes with them.

These moments are shaping for the individual and set the stage for engrossing stories like Three Billboards and A Good Man is Hard to Find. Both McDonagh and O’Connor give us stories about people doing or suffering horrific things. Both writers explore how people question in the face of suffering. What is happening? How did this happen? Most importantly, why did this happen?

O’Connor’s Catholicism offers one answer to the question of ‘why’: suffering has greater significance beyond the individual. O’Connor sees and portrays a world full of broken people longing for the redemption that Christ offers. As a lapsed Catholic, McDonagh offers a less comforting, though perhaps more relatable, answer: people often suffer for no reason at all, and their only real recourse is more violence. When given clarity through tragedy, Mildred Hayes sees nothing but emptiness. If O’Connor portrays a Christ-haunted South, McDonagh provides a South haunted by a quickly fading fiction of meaning. One can almost feel McDonagh’s personal uncertainty bleed through the words of Mildred Hayes. Is this the way the world truly is? ‘I hope not’.