While the death and resurrection of Jesus has been the subject of intense biblical and historical enquiry throughout the history of Christianity, many theologians have observed the ways that these events are paralleled in the natural world. In his famous response to eighteenth-century deism—Analogy of Religion, Natural and Revealed (1736)—the Anglican bishop and apologist, Joseph Butler (1692-1752) argued that scriptural teaching was directly analogous to the work of God in nature. Thus, while nature displays seeds falling to the ground and dying, followed by life again every spring, the scriptures present the crucifixion followed by the resurrection.

Red maple outside my window. Tulip
Opening her white hands to the gray sky.
As the long winter loses its death grip,
Daffodils, having done their work gladly,
Bow their heads to make way for hollyhocks
That will soon raise their green stalks and tower
Over the brightly humble purple phlox.
The garden is piled with green, each flower
Gathering strength underground for its launch
Out of darkness into the atmosphere,
To float and sway weightlessly under branch
And cloud in warm wind. The Kingdom is here.
The world bustles about with every spring,
As if cleaning house for the coming King.

In his latest album released today, Resurrection Letters, Volume I, Peterson paints a vivid and poetic portrait concerning the ways that the resurrection is implanted throughout the natural world. [1] He provides an audible triptych that focuses on three interrelated themes: the historical event of the resurrection, its provision for salvation, and its eternal ramifications for Christians. It is a visual depiction that draws upon the changing of the seasons and a shift from death to life, ‘My dream for Resurrection Letters, Vol. 1 is that it would be the kind of record people turn up to eleven on Easter Sunday, when the world gets its first blush of spring after the long winter, when the cherry trees are in blossom and daffodils are bursting from the ground and Christians all over the world celebrate something that happened—it really happened—two millennia ago.’ [2]

At the close of Resurrection Letters: Prologue, we find Jesus interred within the tomb of Joseph of Arimathea and the listener is ushered into a period of darkness, silence and sadness, with all of creation left in a period of anticipatory waiting. [3] 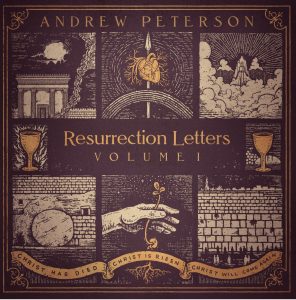 The first song of Volume I, ‘His Heart Beats’, picks up immediately at this point and provides a natural transition from the focus on Good Friday to the early hours of Easter Sunday. In the midst of that darkness, the silence is pierced by the heartbeat of Jesus, an aural effect that Peterson provides through percussion, and one that pervades the background of the entire song. It is an upbeat composition—both lyrically and stylistically—and full of visceral imagery to demonstrate the stark contrast between the sobering death of Christ and the joyful impact of his resurrection.

In ‘Risen Indeed,’ Peterson recounts the scenes on Easter Morning as the disciples run to the empty tomb. In particular, he focuses on the encounter between Mary Magdalene and Jesus in the garden (John 20). Mary only has to feel the repercussion of hearing her name to know that it is Jesus, before he tells her to go and to tell the other disciples.

On a thematic level, Peterson draws upon various images within nature, such as the depiction of winter scenes bursting forth into spring as a metaphor for the death and resurrection of Christ. In an observation reminiscent of the aforementioned Joseph Butler, Peterson explains, ‘Just as sure as daybreak, springtime, the sprouting of tulips, the joy of life after the groaning of labor, Jesus demonstrated his redemptive love for his creation by entering it, dying for it, and then rising from the ashes with a glorified body’ [4]

In the third song, ‘Remember Me’ (written by Ben Shive), Peterson answers the question posed by King David in Psalm 24, ‘Who shall ascend the hill of the Lord?’ No one is able to ascend the hill except for Christ and the events of Holy Week provide the means by which Christians will reside with him forever. The song is distinct in style from the others on the album in its quickly delivered verses, but it provides some deeply poetic imagery that dilates the lens from the earlier focus on the events of Easter to its foundation in the Old Testament and its eternal implications. 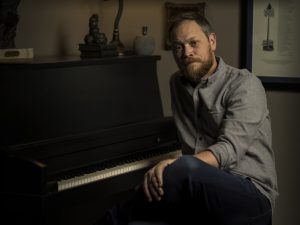 The life, death, and resurrection of Christ had an immediate impact on his disciples and transformed them to the point where they scattered throughout the ancient world to proclaim the gospel message. Despite facing persecution and death, they had seen too much to deny it or to do anything else. In ‘I’ve Seen Too Much’, Peterson reflects upon their reaction and the ways that these events continue to impact Christians throughout the world. As he comments, ‘There are too many good and beautiful things, too many stories that cry out for things to be made right, too many lives changed, too much healing, too many examples of humble sacrifice in the face of great evil for there to be no meaning, no bright love on the other side of the veil’. [5]

It is a similar sentiment every time that Christians gather to receive the Eucharist. The song, ‘Remember and Proclaim’, celebrates communion as an ecclesial moment to remember the events of Good Friday and a commission for his followers to proclaim Jesus’ death until he comes again.

In ‘Maybe Next Year’, Peterson draws our attention to the city of Jerusalem. It is the place where Jesus walked and taught, where the Jewish people continue to wait for the reestablishment of the Temple, and a reminder for  the followers of Christ who await the New Jerusalem. Against a recorded background of Jews singing at the Western Wall as the sun sets on the Sabbath, this song elucidates the heartfelt longing for the return of Christ. As the characters in the musical, Fiddler on the Roof, say with hope to one another at the end, ‘Next year in Jerusalem.’

The next two songs follow this eschatological vision by exploring the broader implications of the resurrection. Drawing a parallel to the darkness of Good Friday and the redemption of Easter, ‘Rise Up’ is a cosmic exploration on the ways that God will establish the new creation and make all things right again at the return of Christ. It is a song of hope for those individuals who feel consumed by the darkness and injustice that continues to surround them.

In ‘Is He Worthy?’, Peterson provides a liturgical song that draws upon the words in Revelation 5 and the worthiness of Christ. Accompanied by piano, strings and choral music, it is an anthem that shifts the attention away from the immediate events of Easter, and the multi-variant impact that it has on his followers, to the solitary figure of Christ. Like the waiting ushered in by the death of Christ, creation continues to groan in eager anticipation when the darkness will be dispelled forever and all things will be made new.

With the final song, ‘All Things Together’, Peterson concludes the album by focusing on the fact that it is the person and work of Christ that holds everything together–from the vast galaxies in the universe to the smallest molecules on earth. It provides a nice conclusion to the album by centering on the events of Good Friday and Easter, and the importance of them both for individuals and for all of creation.

While contemplating the two new albums of this project, Andrew Peterson would like his listeners to follow the story chronologically and to reflect upon these events and their deep significance:

My hope is that they would defer listening to volume one until the breaking of the dawn on Easter Sunday—and then that they would sing them at the top of their lungs, loudly enough that the world would wonder what all the fuss is about. The hope proclaimed by Scripture is that Jesus, now at the right hand of the Father, is making all things new, and that includes you and me and all of creation. My hope is that these songs, however they’re used, would wake up a bright longing in people’s hearts for the coming kingdom, for our resurrection, prefigured in Christ’s. [6]

For many individuals, the Easter story is a familiar one. Like reading the last chapter of a book first, the events that precede it can appear to lose their significance in the shadow of its conclusion. Peterson, however, provides a rich opportunity through his music to enter into the biblical narrative and to feel the deep sorrow of the crucifixion, the immense joy of the resurrection, and its rich implications for our lives now and in the future.

As we meditate on these events and its significance for ourselves and for creation, the Resurrection Letters project will add much-needed depth and meaning to this historic event and the ways that Christ will indeed make all things new.

Readers may purchase a copy of this album at The Rabbit Room, or at iTunes and Amazon.

[1] I am indebted to Andrew Peterson for providing a copy of this album for the purpose of this review.
[2] http://rabbitroom.com/2018/01/resurrection-letters-one-album-three-parts-ten-years/
[3] Readers can view our review of Prologue here
[4] Liner Notes for ‘His Heart Beats’, provided by Andrew Peterson.
[5] Liner Notes for ‘I’ve Seen Too Much’, provided by Andrew Peterson.
[6] http://rabbitroom.com/2018/01/resurrection-letters-one-album-three-parts-ten-years/