The world is not as it once was. Even now, it is changing. In Alfred Lord Tennyson’s ‘The Passing of Arthur’, itself the twelfth poem in The Idylls of the King, the reign of Arthur Pendragon is closing. It begins at night, on the eve of his final battle. The old king cries out in his tent. Sir Bedivere, last living Knight of the Round Table, has been pacing ‘among the slumbering host’ (7) of Arthur’s army. He goes to his king and listens as Arthur laments the state of the world, remembers happier days, stews on betrayals he has experienced, and wonders if life is meaningless after all. 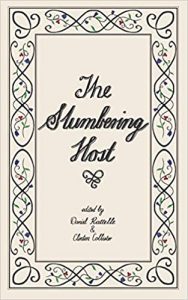 The Slumbering Host, the new poetry collection edited by Daniel Rattelle and Clinton Collister and published by Little Gidding Press, takes its title from this scene. The Slumbering Host is an evocative name. It gives unity to the lines within. Under its banner, poems by Rattelle and Collister, along with work by James Matthew Wilson, Sally Thomas, Marly Youmans, David Middleton, and many others, are like sentries watching over a sleeping world, recalling past glory, trying to catch present luminosity, and wondering what can be said about suffering, meaning, and hope. Their characters often occupy liminal spaces. For example, there is Thomas’s hermit, who over three poems is caught between heaven and earth, youth and age, mid-summer and mid-winter. In the last of the three, ‘All Souls, in Morning Fog’, he hikes

Through grounded cloud to the summit, the very edge
Of the world. Before him, nothing. The hidden creek’s
Wind-noise speaks to him from the rising whiteness.
A hawk skirls and hangs where the sky clears. (3-6)

The hermit is one of many in these poems who is waiting, suspended between two states, sensing and hoping for a transcendence that is not quite tangible.

The characters of these poems often look for meaning in heroic making, as in Matthew Faller’s ‘Apprenticeship’. They are at times anxious about the artifice and insufficiency of their work, as in Ratelle’s ‘The Bookcase’. They reflect on the role of suffering in making, particularly as it plays out in God’s providence, as

Life rises from mangle
From stems slashed at angle. (‘Hydrangeas’, 13-14)

And there is nearly always a looking back. The dead are everywhere—fathers, saints, Joyce, Yeats, Hopkins, Newman, deans, and royals. Graveyards appear more than once. Did something significant die with our ancestors and these poetic (and sometimes actual) saints? Has an impassable threshold been crossed, dividing their age from our own?

Wilson’s ‘Teele Square Sunday Morning, Summer 2001’ marks one such divide, as the 9/11 attacks leave worship that was once ‘ripe and everything so clear’ (22) in a state where ‘joy stops, doors shut, and few of us will stay’ (25). Daniel Sheehan, likewise, contrasts innocence with nostalgia’s ache in ‘Afternoon’, in which the narrator, ‘bent, into the man I am’ (10) now hears the sounds of play ‘as lament’ (11). The men of Host’s poetry—and indeed nearly all of its characters are men—struggle with time’s flow as they leave childhood behind or are, as in Clinton Collister’s ‘For Bernard Iddings Bell’, left behind as relics of a long past age.

But its best poems are those that complicate that tradition and interrogate our longing backward gaze.

Yet it would be unfair, and inaccurate, to characterise The Slumbering Host only as an exercise in longing for the good-old-days. It is deeply conscious of the poetic tradition, true, and its back matter rhetorically asks, ‘shouldn’t poetry invite us into a tradition that unites us with the living, the dead, and the unborn?’ But its best poems are those that complicate that tradition and interrogate our longing backward gaze. These are the poems that invite us into a playful engagement with memory and making. Graham Shea, for instance, urges patience in making meaning through writing and reading. His sonnet ‘Words’ is erotic in a way that recalls the Song of Songs, in particular the warning ‘Do not arouse or awaken love until it so desires’ (Song of Songs 8:4 NIV). His concluding couplet goes,

May all my words to you in dew-joy glisten
Bathing in the time it takes to listen. (13-14)

Shea’s request, to let a poem unfold according to its own time, is well-placed and wise in the midst of the collection’s focus on memory and tradition. The past cannot simply be conjured by pretty words. Its appearance when, or if, it does come may surprise us.

stone remains and sings a silent song
Of strength and glory lost to ages long. (15-16)

But he turns to a deeper realization of the architecture’s original gaudy colouring:

Medieval churches weren’t left grey when new,
Were bathed in brilliant paints of every hue. (24-25)

Keane realizes that celebrating old grey stones as symbols for an idealised stoic maturity is really a childish impulse. Even worse, it is untrue. Medieval churches and statues weren’t solemnly uncoloured. Perhaps, he wonders, our pretentious aesthetics are too caught up in what ‘we wish the past had been’ (34). It may be that the tradition is wide enough to include the giddy and silly as well as the formal and serious. Sheehan’s ‘Fourth of July’ is another stand-out, as it combines nostalgia and particularity not for its own sake, but to build towards Pentecostal joyousness.

The slumbering host is also, of course, a Eucharistic allusion. The past sleeps in its grave, and the present is drowsy with indolence and the film of familiar things. Transcendence in these poems is often linked to bread and wine. Time and again the poets visit churches, participate in mass, and trace the hands of priests. Doug Taylor-Weiss’s ‘Wedding at Cana’ is particularly delightful, as Pleasure and Duty sit exhausted and dry at their wedding feast,

… Aghast at losing
Face, each blamed the other. Pleasure, pale
And drained, with croak complained, ‘six arduous pails
Of sweat and tears without one drop of blood’. (4-7)

Christ and his literal band of disciplines (road managed by Mary) come through for the burnt-out party. In a moment of eucatastrophe, they revive the party with music as rich as bread and wine. Jesus, who appears as a bum, a burn-out, someone barely paying attention, awakens. When he does, so does the world, and the wine flows.

Rattelle’s introduction to the collection makes a variety of claims (or non-claims) as to its purpose. He notes noise about a ‘Christian literary revival’ and distances The Slumbering Host from such a movement. ‘Our task’, he claims, ‘is, as it has always been, to make beautiful things’ (1). The prerequisite for such making is a clear-eyed look at the world, unclouded by wish-fulfillment or fear. Yet after rejecting participation, he allows that ‘if there is to be a revival of Christian literature’ it must not be cloistered within its own Christian-art economy. ‘Let us avoid attaching significance to the poems we make’, he concludes. ‘Rather, let us sit by the fire and read them’ (2). In other words, they are not a cry to battle but to a quiet sitting in the camp. As a collection, these poems fulfill Rattelle’s wish. However, they are at their best when they unsettle his cozy image. My own favourites were the poems that refused the reader any easy nostalgia or cheap sublimity. The Slumbering Host may not be part of a movement, but it is a stirring, even occasionally a sharp nudge.