James Smoker argues that The Handmaid’s Tale is not “detrimental to Christian values” but an important challenge to corrupted religious power, in the next installment of our new series on banned books.

Margaret Atwood’s The Handmaid’s Tale is one of the great literary comebacks of recent years. Interest in the 1985 novel surged in 2017, following its adaptation into a television show. The transition from page to screen wasn’t the only factor, however. An essay also written in 2017 by Sarah Layden notes how dystopian novels, including Atwood’s and George Orwell’s 1984, experienced a boost in sales following the inauguration of Donald Trump. She observes that, ‘The resurgence of “The Handmaid’s Tale” may come partly from the fear and anxiety of our time, but it also shows that people want to read about censorship and literacy, not be censored and become illiterate’.[1] It is ironic, then, that The Handmaid’s Tale is one of the most challenged and banned books of the twenty-first century. 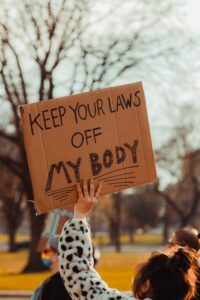 The book has been challenged on a number of grounds: its depictions of state-sanctioned rape, its bursts of violence, obscene language, and that it’s ‘detrimental to Christian values’.[2] It’s this last challenge I would like to focus on. On the surface, the accusation seems fair (although perhaps not sufficient to justify a ban). The Handmaid’s Tale depicts a theocracy, Gilead, based on Christian rhetoric and imagery. Moral behaviour is tightly controlled. Those deemed to be sinners are tortured, exiled, enslaved, or executed. Most of all, the idea of male headship and female submission, based on language used throughout the Bible, is a central organizing principle of Gilead. The state, run by men, exerts total control over the bodies of Gilead’s women. Real-world connections become easy to make, and Gilead has been a common media shorthand to describe fears of where society could go if, for example, the American religious-right enacts legislative control over women’s bodies.[3] The Handmaid’s Tale is indeed a critique of a kind of political Christianity that seeks to enforce its morality by fear, surveillance, and dehumanization of those outside of it—the sort of religiosity that would silence any idea that is subversive, critical, ‘detrimental’. But it is not a critique of Christianity per se.

I have read The Handmaid’s Tale twice—once as assigned high school reading (I didn’t appreciate it then), and then again when I was one of the many who picked it up post-2017. In that second reading, I was struck like many of the book’s readers by its thoroughly imagined world, by the horrors Offred/June had to endure, by the suffocating sense of no escape. Yet there was one scene that stood out. It is a scene two thirds into the book, after June recalls the day that she and her family tried to escape the coming nightmare. She relives this memory, and then she kneels to pray alone in her room. 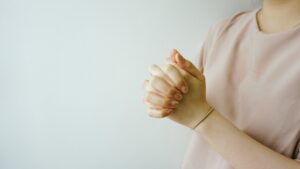 First, she recalls the forced prayers during her handmaid’s training, when the Aunts would keep them in perfect posture and direct their words. ‘What we prayed for was emptiness’, June recalls, ‘so we would be worthy to be filled: with grace, with love, with self-denial, semen and babies’.[4] Gilead’s regime focuses on the removal of every woman’s selfhood, taking their financial, familial and sexual autonomy. A woman’s sole purpose in Gilead is to provide for men. Even her name is taken, replaced with designations like of-Fred and of-Glen. ‘O God, obliterate me’, they were forced to pray.[5]

Then, in her present, June looks out from her room in the Captain’s house, into the garden. It is empty. She sees no God who walked alongside Adam in Eden, nor the resurrected Christ whom Mary mistook for a gardener in John’s gospel. She is alone. Then there is the mysterious line, ‘I don’t even close my eyes. Out there or inside my head, it’s an equal darkness. Or light’.[6] For me, it recalls the lines from Paradise Lost,

…There is a Cave
Within the Mount of God, fast by his Throne,
Where light and darkness in perpetual round
Lodge and dislodge by turns…[7]

Even the darkness is not dark to you;
the night is as bright as the day,
for darkness is as light to you.[8]

Both passages are assurances in the midst of unknowing; that even in darkness and despair, even if they aren’t able to see it, the petitioner is at the throne of God. Whatever the allusion—and I’m sure there are more—June then says her own prayer. It is worth quoting at length:

My God. Who Art in the Kingdom of Heaven, which is within.

I wish you would tell me Your Name, the real one I mean. But You will do as well as anything.

I wish I knew what You were up to. But whatever it is, help me to get through it, please. Though maybe it’s not Your doing; I don’t believe for an instant that what’s going on out there is what You meant.

I have enough daily bread, so I won’t waste time on that. It isn’t the main problem. The problem is getting it down without choking on it.

Now we come to forgiveness. Don’t worry about forgiving me right now. There are more important things. For instance: keep the others safe, if they are safe. Don’t let them suffer too much. If they have to die, let it be fast. You might even provide a Heaven for them. We need You for that. Hell we can make for ourselves.

I suppose I should say I forgive whoever did this, and whatever they’re doing now. I’ll try, but it isn’t easy.

Temptation comes next. At the Center, temptation was anything much more than eating and sleeping. Knowing was a temptation.

Deliver us from evil.

Then there’s Kingdom, power, and glory. It takes a lot to believe in those right now. But I’ll try it anyway. In Hope, as they say on the gravestones.

You must feel pretty ripped off. I guess it’s not the first time.

If I were You I’d be fed up. I’d really be sick of it. I guess that’s the difference between us.

I feel very unreal, talking to You like this. I feel as if I’m talking to a wall. I wish You’d answer. I feel so alone. 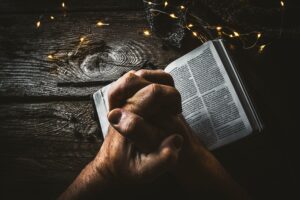 In C. S. Lewis’s Letters to Malcolm: Chiefly on Prayer, he describes how he ‘festoons’ the Lord’s Prayer. A festoon is a garland, flowers, lights, or ribbons, hung up for decoration. Lewis sees each line of the prayer as a guiding structure, like the hooks on a trellis. He faithfully repeats the prayer, but he can adorn each line or hook with his own petitions and adorations. ‘I call them “Festoons”, by the way’, he writes, ‘because they don’t (I trust) obliterate the plain, public sense of the petition but are merely hung on it.[10] He then relates his own festoonings: how ‘thy kingdom come’ may be a petition for harmony as well as the breaking-in of God’s Kingdom in his self, his household, his college, and in England; how ‘thy will be done’ may be a submission to suffering but also a desire to find contentment in old age.

Festooning the Lord’s Prayer is a rich theological practice. Martin Luther advised readers on how to pray alongside each petition when one has ‘become cool and joyless in prayer’.[11] Karl Barth did the same in Prayer and Preaching, exuberantly expanding on each line as was his wont.[12] Then there are the artists who riff on its structure, such as Mahalia Jackson and Duke Ellington’s jazz adaptations of the prayer, and Christopher Tin’s joyous Swahili version, ‘Baba Yetu’.

In The Handmaid’s Tale, June adds her own festoons to the prayer, although her garlands are dark with mourning. Even so, her festoons are her own. Lewis emphasizes this for himself, writing, ‘I don’t very much like the job of telling you “more about my festoonings”—the private overtones I give to certain petitions’.[13] The great paradox is that, in this repeating of Christ’s words, the most-often said prayer in Christianity becomes an individualizing act. Saying it, and adorning it as she does with her own aches, doubts and suffering, is a way for June to assert herself before God. She is a fully realized ‘I’ making a desperate petition to the divine ‘You’.

June’s belief does subvert a certain kind of religious power, as did Christ’s.

This prayer, then, does subvert the religious values of Gilead. Instead of emptying June and removing her personhood, it is a mark of her particularity and dignity. It is a rebellion against the empire that has tried to take her freedom, her name, her voice. Even the location of the prayer, said privately in her room, recalls Christ’s prelude to teaching it to the disciples:

June’s belief does subvert a certain kind of religious power, as did Christ’s. He promises that it is June’s prayer, and not the religious ceremonies of Gilead, that will be rewarded by God. The act of praying itself—even when the one who prays begs for a silent God to answer, for relief from suffering, for a better kingdom to come—is a yes to June’s desperate belief. Her words echo the Psalmist, the theologians and the artists. She prays alongside Christ himself, who also once addressed his Father in desperation, at the mercy of the power of the state.

In the hell of Gilead, June hangs her own garlands on the words given by God. She asserts her name and her dignity. And before the throne of God, she is not silenced.