In his foreword to this new book, N.T. Wright notes, ‘Makoto Fujimura is one of those rare artists with the ability to explain what he does, why he does it, and how his vocation makes sense within his larger worldview’. This is an accurate statement, both of Fujimura’s writing abilities and the difficulty most practitioners of art have in discussing their work. Most artists (with notable exceptions) ‘think with their hands’ and are often unwilling or unable to explain the meaning of their work.

But even as Fujimura ably articulates what he is doing and ‘saying’ in his art, his primary message is that the Christian community needs to increasingly ‘think with their hands’ in being makers of culturally renovative works of beauty and mercy, rather than mere cultural diagnosticians. 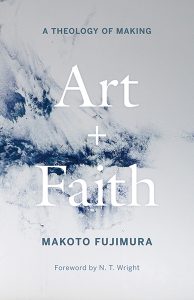 Fujimura develops a ‘Theology of Making’ along three theological foci: protology, or the doctrine of Creation; pneumatology, or the doctrine of the Holy Spirit; and eschatology, or as Fujimura prefers, the doctrine of New Creation, the dynamic now-but-not-yet promise of the outcome of God’s redemptive purposes. Fujimura insists that Creation should determine for Christians who God is and what God is up to throughout history. God is a Maker, not merely a thinker, talker, or a prognosticator. A recurrent critique of contemporary Christianity is that it is too taken up with such thinking, talking, and prognosticating rather than the kind of ‘culture care’ that making centers on. In this sense, Fujimura’s book is reminiscent of Andy Crouch’s Culture Making (2008). Both Crouch and Fujimura fault contemporary evangelicalism with engaging in too much world-viewing and not enough world-making.

Central also for Fujimura is a determinative role for the Holy Spirit. It was the Spirit who enabled the making-ministries of Bezalel and Oholiab in Exodus, and who continues as the often-unacknowledged inspiration behind nearly all forms of making in the world. It is the Spirit who is out in front of the Christian community, meeting them and challenging them with works even from non-religious sources that nonetheless draw upon the creative fecundity that God invested in the world.

In this regard Fujimura offers fascinating suggestions about the role and function of artists. Artists serve as the antennae of culture, intuiting and articulating dangers downstream of current events. They are also the ‘border stalkers’ who exist in the no-man’s lands of society, exploring and excavating what the Spirit is up to. Their role can appear suspicious and is frequently susceptible to misunderstanding in the Christian community.

‘The Bible begins with Creation and ends with New Creation. Everywhere in between, Creator God beckons the broken, but creative, creatures to create shalom/peace in the face of our ‘Ground Zero’ reality all around us’. [p. 20]  Taking cues from Tom Wright, Fujimura deploys a narrative hermeneutic of Scripture, infusing his vision of Christianity with a dynamic drive toward a new, yet satisfyingly symmetrical conclusion of history, within which investment in human culture is theologically warranted. His, like Wright’s, is an optimistic eschatology, where the things of this world are renewed rather than destroyed, saved rather than damned. Making makes sense when viewed as being incorporated into the beauty of the New Jerusalem, into which ‘the kings of the earth shall bring their glory’. (Rev. 21:24)

For someone like myself who has been following and reading Mako’s art and writings for some time, much of this book is familiar territory. His books are written in a conversational style which benefits from repeated reading to track the development of his arguments. I was most moved by the latter chapters of the book, which center on his reflections on John 11–12. Here, Mako brings to bear aspects of Japanese culture in a meditation on how suffering and vulnerability are often the best place from which to understand the Gospel. His positing of a ‘Lazarus culture’ enables us to live in the tension of Holy Saturday, where nothing appears to be happening, yet we carry on in practiced hope that our making is not without meaning.