[EDITOR’S NOTE: For her contribution to our series of artists’ reflections on their creative processes, illustrator and visual artist Karlee Lillywhite describes creating a visual, textual ‘narrative experience’ through her reimagined version of George MacDonald’s Lilith. Using her art to respond to the tragedy of the Covid pandemic, and its implications for art-making and exhibiting, Karlee outlines a new creative approach designed to draw out the passages in Lilith that speak to our experiences of suffering and grief during the pandemic, reframing these words and giving them new vibrancy and relevance through her illustrations.]

I’m not quite sure why I started reading George MacDonald’s Lilith over the Christmas break. I picked it up casually, curious about the Scottish author who gave birth to the modern fantasy genre and inspired the likes of Chesterton, Lewis, Tolkien and L’Engle. The strange, fantastical world of Lilith drew me in gently with its riddles and poetry. It seemed to have something important to say. Within the first dozen pages, I began to notice lines that seemed strangely relevant to the pandemic situation. I decided to collect them as I read and to use them as the basis for an illustration project for Transept’s spring exhibition.

Around the same time that I settled on Lilith as the basis for the project, I was coming to terms with the unfortunate reality that the exhibition would be entirely online. I typically work with traditional media, and I had been looking forward to exhibiting an original artwork rather than photographs of it. Instead of settling for a disappointing, virtual version of something meant to be experienced in person, I decided to embrace the digital medium. I designed a new technique that combined traditional and digital media to create a piece specifically intended for a screen. I wanted to give viewers a sense that they were being personally addressed by the work, that their context and circumstances were being acknowledged. Keeping in mind a digital user’s instinct to explore virtual content by scrolling up and down on their device, I imagined a long vertical image containing text and illustrations arranged into a kind of path that viewers would walk with their fingers. Although one continuous image, the piece would only ever be viewed in part through the shifting frame of the viewer’s screen. However, unlike the medium of film, the movement between still frames would be decided by the viewer, offering a narrative experience that was personal, interactive and potentially meditative.

With a direction in mind, I started out with a few experiments to develop my new, hybrid technique. I tried drawing a flower in pencil, then taking a photo of it and digitally painting behind the grayscale drawing in Photoshop, using the trackpad on my laptop. I was fairly happy with the result but wanted to experiment with more subtle layering of transparent colours, so I spent some time playing around with a 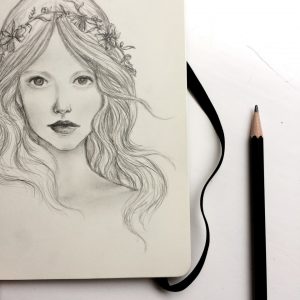 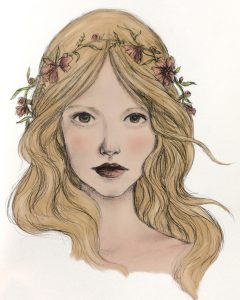 pressure-sensitive digital drawing tablet. My usual traditional media technique involves sketching an image in pencil, then outlining in ink before erasing the pencil marks and adding colour with watercolour paint. My new technique is similar, but the final piece trades clean ink lines for the sketchy texture of graphite and replaces the textured quality of watercolour paint with smooth, graphic swathes of digital colour. The result has a subdued, nostalgic feel reminiscent of a colourized vintage photo that I think will work well with the 1895 text from Lilith.

The novel constantly circles around the themes of death and sleep. MacDonald beautifully illustrates the idea that one cannot wake until he sleeps, claiming that, likewise, one cannot live until he dies. In so doing, he uses the notion of sleep to reframe our understanding of death as something ultimately fruitful. In a time of loss, darkness and waiting, I found this chrysalis-like imagery to be full of a powerful hope that does not depend on the denial or trivialization of struggle and suffering. It reminded me of the line spoken at compline: “O Lord Jesus Christ, Son of the Living God, who at this evening hour didst rest in the sepulchre, and didst thereby sanctify the grave to be a bed of hope to thy people…” Heard in the echoing dark of the chapel, I love the way that line reframes both death and sleep, sending me home shimmering with a sense of enchantment for the mundane task of going to bed. It is this quality of compline that I would like to capture and convey through the illustrations.

In a time of loss, darkness and waiting, I found this chrysalis-like imagery to be full of a powerful hope that does not depend on the denial or trivialization of struggle and suffering.

I took my time with Lilith; I read it slowly, allowing my imagination to absorb its compline mood and for the images that it had planted in my mind to ripen. By the time I finished the novel last week, I had highlighted over 200 phrases or sentences that I found related to the pandemic — lines about craving human presence, about seeing only one other person, about leaving and staying at home, about faces and masks, about waiting and the sensation of time ceasing to matter. By the end, the book had begun to feel eerily prophetic of our modern situation, even though it is set in a surreal other-world. 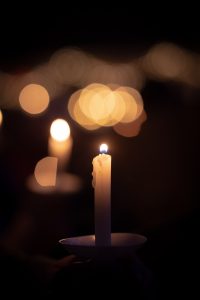 Of course, the fact that I found so many seemingly relevant details in the novel could be explained away as an example of ‘frequency bias’ in which the first few instances of applicability heightened my awareness and made me see patterns where none existed — like a doctor mistakenly diagnosing a patient with a condition that she read about earlier that day. However, I think it is more likely that, through the fantasy genre, MacDonald was able to explore timeless realities of human experience and suffering that transcend particular circumstances. Sorting through the treasury of perennial truths he provided, I simply picked out the gems that complemented one another and the present moment.

By the end, the book had begun to feel eerily prophetic of our modern situation, even though it is set in a surreal other-world.

At this point, I’ve whittled down my selection to around 50 lines and arranged them into a new narrative that retells Lilith in a way that echoes the pandemic narrative. Hopefully, the finished product will invite viewers into the revised world of Lilith and, through it, offer the chance to reflect on and revise their own stories. We all need a sense of story in order to bear suffering — in order to believe that loss is not merely an end but some kind of beginning. In fusing Lilith with the pandemic, we can identify with characters in the story and carry the enchanted worldview that we find there back into our daily lives. If you leave the art piece and find messages of comfort and hope in the moon seen from your window, or in a raven in your garden, you could explain these away as occasions of frequency bias. Or, you could embrace the inbreaking of enchanted hope into the mundane reality of daily life: an instance of grace revealing the kingdom to come that is already in our midst.