[Editor’s Note: Composer and musicologist Jane Pettegree uses her fascinating contribution to our series on artists’ creative processes to introduce readers to a new way of thinking about and making music. She describes how an asynchronous collaborative composition can bring voices together ‘in the absence of real-time co-presence’, offering an alternative when musicians cannot share a physical space, then describes how the asynchronous composition she is creating for the In/break exhibition will weave improvised, home-recorded sounds into conventional music and ‘the vibrant pre-verbal sounds of the natural world’.]

This isn’t going to be a theoretically anchored piece of writing.  Rather, it’s an ethnographic reflection on work-in-progress on an asynchronous collaborative composition, using this as a substitute for choral singing together, which has served me and possibly a few others as a guideline through times when live musicking has been all but impossible, and when keeping faith from moment to moment might otherwise have been difficult. I’m midstream in this composition now, digging the ditches through, and out of which I hope will flow a composition based on giving a group of friends a space in which to offer up music as part of their own singing-in-faith.

we find ourselves to be present to each other, and collectively this is shared round and offered up to God

I’m not a composer.  I’m usually a singer.  I also worship and sing with a Scottish Episcopal Church choir, and sometimes stand in front of them and ‘conduct’ (traffic directing for free-flowing autonomous noisemakers). However, like most of the world’s community-based music-makers, I have been silenced in the past year by COVID, and I’ve been running online choir practices, and mixing virtual-choir home-recorded motets, with my choir for the past few months, with everyone synchronously muted.  If we sing together on Zoom in real time it sounds wild, like the fragmented laments or fireside cries of Neanderthals (with apologies to Neanderthals). 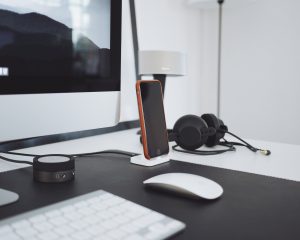 Using backing tapes and singing into our mobile phones at home, we have become used to submitting our single voices for post-hoc assembly.  Individually, we sound rough. Together, eventually, we sound, well, much better. It takes time, and uses technology as a substitute for the richer-by-far medium of shared airspace and co-presence, but it’s helped us to keep together and to bring our voices occasionally into remembrance of the rest of our particular congregation.  Thus mixed, we find ourselves to be present to each other, and collectively this is shared round and offered up to God (sorry, Lord, we know you will resolve the distortions and occasional un-synchronicity; even the best live choirs will have a few random moments of unexpected white noise).

Through doing this, I’ve needed to change my thinking about music, shifting from focussing on the object of ‘music’ to the process of ‘musicking’.  From ‘done that’ (past orientated) to ‘doing that’ (future orientated).  This has been useful, personally.  There have been times in my life when music has been a professional, stage-performed, concert-based activity, and when the joys and frustrations of trying to produce near-perfect sounds have been hugely important to me.  That hasn’t been the case for some years, as asthma crept into my lungs and compromised both sound and breath. I’ve been realising that one-off performance is actually not the most profound and important aspect of my own singing.  Singing in church choirs has been, since I was very small, part of my living-in-the-world faith structure, and the constant in this singing has been the embodied contact with co-musicians which musicking together provides.  Where two or three are gathered together, God and harmony (potentially at least) are present.  In the absence of real-time co-presence, sonic mixes of the unique voices of my friends become vitally important, even those who sometimes sing a wee bit flat or behind the beat.  Joy emerges from this diversity of colour and timbre.

Through doing this, I’ve needed to change my thinking about music, shifting from focussing on the object of ‘music’ to the process of ‘musicking’.  From ‘done that’ (past orientated) to ‘doing that’ (future orientated).

The basis of the composition is Psalm 98, one of a series of psalms which talk about ‘singing a new song’.  In this instance, the psalmist invokes the varied and diverse sounds of the world – ‘all the earth’ singing.  Sure, there are conventional ways of making music – trumpets, harps, and vocal singing.  But also, there is the music of the world – the roaring of the sea and the imagined dance of hills and floods.  Out of this rich emersion of humanity in the raw stuff of the noisy earth comes something new.

The initial, conventionally ‘music’ track is done.  To keep things simple (for me as well as the singers) I’ve composed a new SATB Anglican chant setting for Psalm 98, and some folk in the choir of Saint Andrews, St Andrews have been kind enough to contribute home recordings.  It’s been mixed and shared and will go on to serve as the main frame for the larger piece.

I’m now gathering in two sets of improvised sounds – spoken, hummed or whatever – home-recorded audio responses to two audio prompts which sit in the background as pre-compositional musics. The audio prompts won’t be heard in the final composition: they are just there to start the individual singing-back.  The first prompt was circulated at the end of Epiphany when the liturgical readings encouraged us to think about light breaking into the world.  It contains a reading from Revelations 14 about heavenly choirs and perfected sound, which was mixed with some vague unresolved synthesised chords and the sound of a softly ringing metallic singing bowl (in my head this has associations of being tempered in fire). The instructions for this prompt asked the respondents to offer into the home recorded space memories and ideas of once-heard ‘heavenly music’, recollections of music which made God present in the world for them. The second audio prompt was circulated on Ash Wednesday, and has a heavily distorted sample from a well-known song about the ‘sound of silence’ gradually giving way to sounds from the natural world, recorded last autumn, during harvest time, of a stream and songbirds and distant tractors.  That suggests (maybe ….) an idea of harvesting sounds, storing up riches for times of winter dearth, ready for a time of need; and also, despite our musicking silence, the continuing sounds and hopes for renewal we are afforded from God’s creation.  The second text is from the Book of Job chapter 4, about silence and our imperfectability without God’s grace, and from Psalm 39: 4-7 and 9, sometimes sung in the context of a Requiem, recognising the brevity of life, God as the unexpected harvester, and calling for deliverance out of silence.  (I hear this text in my head set by Brahms, but his music is too strong a presence for me to disassemble).  The transition from the spoken voice in the prompt into the vibrant pre-verbal sounds of the natural world will give (I’m hoping) an opening possibility for hope and re-sounding.  The instruction for response for the second home recording will ask people to walk outside and listen carefully then tell us (briefly) what sounds they notice.

The instructions for this prompt asked the respondents to offer into the home recorded space memories and ideas of once-heard ‘heavenly music’, recollections of music which made God present in the world for them.

The end mix will use the various recorded prompts alongside (inbreaking?) the setting of psalm 98.  The first set of voices have already provided some striking connections, although I may need to trim some of these a bit to keep the work to a manageable length; everyone was very generous and creative with their thoughts.  Until I receive both sets of recorded responses, I don’t know if the voices will be presented as ‘before’ and ‘after’, or more probably, matched up and breaking in alongside different verses of the psalm.

I should say that – consent forms and information sheets notwithstanding (and they are there, as part of ethical consent processes) – the people whose voices figure in this composition are all trusting me not to do asynchronous violence to their contributions, and I’m hoping that what emerges as the end point keeps faith with their trust.