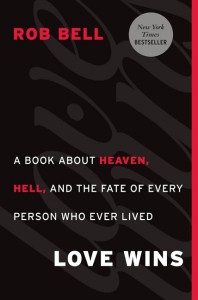 Most book reviews open with a tidy summary of the book in question. To put it gently, Rob Bell’s new book Love Wins (HarperOne, 2011) resists summary. So instead of a chapter-by-chapter summary, I’d like to articulate, as best I can, what I think Bell’s ideas are about Heaven and Hell, and thus about divine love, justice, and mercy, and try to engage the ideas in a meaningful way.

To begin with, I am grateful to Bell for pointing out the obvious rhetorical problems inherent in the “turn or burn” style of evangelism, and he’s quite right to point out the spiritual toxicity of the tendency of many churches and individuals to mask downright abusive behavior with Christian language. Bell has obviously met and helped a lot of people who have been hurt in churches and thereby alienated from Christ. Bell’s point in bringing this up here, I think, is that a vivid conception of Hell is often a central feature of toxic religious cultures, and has created a lot of unjust stereotypes of both God and Christians. Bell writes with a pastor’s heart, with a lot of compassion for hurting people, so it’s important for him to soften the usual rhetoric of eternal damnation.

Bell begins not with Hell but with Heaven, and promptly demythologizes the stereotype of golden harps, white robes, and St. Peter the celestial bouncer. He is pretty clear about what he thinks Heaven is not. It is not how the mainstream churches picture it. (That’s no surprise.) But what IS Heaven? Bell seems to think it has a lot to do with the achievement of a just social order, which can be realized on a small scale now, but will be realized on a universal scale in the future (42-49). He indicates that all the references to “Hell” in the Gospels actually describe a state of spiritual death in this life, and not to the state of the soul in an afterlife, much less a state of the whole person after the general resurrection. It sounds very similar the once-radical Protestant tradition of Schleiermacher, Tillich, Niebuhr, and the pioneers of the “social gospel.” Bell does not use the conventional language of that school of thought, but the ideas are certainly there. I can’t tell if Bell is actually unaware that his ideas are so similar to theirs (that would be bad), or if he is just concealing his sources (that would be worse). At any rate, he is clear that when he uses the word “Hell,” he means an individual, interior state of the person who is in the process of rejecting God (92-93). That is not far from Marlowe’s play, in which Dr. Faustus protests that Mephisto can’t be the devil because the devil is in Hell, to which Mephisto replies “Why, this is Hell, nor am I out of it.” Milton borrowed the line for his own Satan in Paradise Lost, so the idea has been making its rounds for a while now.

In a central chapter titled “Does God Get What God Wants?” Bell argues that God’s omnipotent love requires everyone to be saved eventually (100-109), but without the usual Calvinist language of “predestination” or “irresistible grace.” The avoidance of the language of the tradition is understandable but suspect. (I should also mention that he identifies several patristics, namely Clement of Alexandria, Origin, Gregory of Nyssa, Eusebius, Jerome, Basil, and Augustine, who he says support the idea of universal salvation to one degree or another. But Bell fails to cite a single specific work! So if you’d like to check his sources, well, too bad.) Bell is not saying that everyone is forced against their wills to love God, but that everyone will eventually come around one way or another.

What this does is turn Hell into a sort of Protestant Purgatory. I was not surprised to find C. S. Lewis’s The Great Divorce listed in the brief “Further Reading” section at the back of the book, and Bell appears to borrow Lewis’s fantasy tale and literalize it, even though Lewis himself was a little more ambivalent about the extent to which his story could be taken literally. Perhaps that’s why Bell’s arguments remind me so much of George MacDonald, who is featured prominently in that story. Basically, Bell believes that God will not torture people in hell for eternity, but he will allow us to torture ourselves for a very long time, however long it takes us to decide that his plan is the best one after all. I’m sure that idea sounded nice enough in the nineteenth century, but Orwell’s 1984 and Huxley’s Brave New World kind of ruined it for me.

At least Bell’s Protestant predecessors, such as Lewis and Niebuhr, understood that any statement about human destiny would be based on beliefs about human nature. Unfortunately, Bell’s own assumptions about human nature remain largely unstated and undefended. Bell appears to assume that the soul is permanently dynamic at its core, that it goes on changing and developing as long as it exists, even after death. By way of contrast, the poet Dante, following Thomas Aquinas, pictured a Hell populated by people who were miserable but had no desire to be anywhere else. For Dante and Aquinas, death fixes the soul in its disposition toward God, for good or ill, and the soul after death can only develop and clarify that unalterable disposition. Bell, on the other hand, is a happy, American existentialist. He cannot imagine that a human person’s malice could ever really become eternally fixed. Rather, he believes that the human person can and does go on changing and altering its basic dispositions forever, even after death.Frankly, George MacDonald said it first and said it better. For the long version, read Lilith. MacDonald also believed that even Satan will eventually repent and be reconciled to God. Bell doesn’t touch that one, but he should have.

Our ideas of Heaven and Hell must necessarily be based not only on our perception of the nature of God, but also on our understanding of our own human nature. We Americans have a tough time believing that any of our choices are really permanent and irreversible. We like regular change, and we are unsettled by real permanence. We object to the conventional idea of Heaven because it “sounds boring,” by which we mean that we do not wish to inhabit a place that never changes, and we are offended by any suggestion that our own appetite for novelty might be just as disordered as our picture of a paralytic Heaven. And haven’t we learned that anxiety results from our attempt to continually reinvent our own identities? I for one do not relish the thought that existential angst might be eternal.

So what about the afterlife? Bell goes on to argue in his final chapters that the idea of resurrection was taken for granted by both Gentiles and Jews in the first century (it wasn’t), and that the promise of resurrection is primarily if not solely the promise of a new quality of life here on earth, which apparently has something to do with–get this–a more equitable social order that allows for healthy interpersonal relationships and the flourishing of each individual person. I think I’ve heard that somewhere before. Anyhow, I’m left with the impression, without any direct evidence from the book, that Bell is just not interested in talking about the afterlife, and still I have no idea what he actually does or doesn’t believe about it.

I have to admit that, as an English teacher, Bell’s style also annoys me. His breezy syntax, with his earnest assertions and his little parallel phrases piled one on top of another, works very well when heard aloud, but it doesn’t translate very well onto the printed page. And the quick pace is just not appropriate for discussing a theological subject as complex as divine justice.

Another part of my frustration, I think, is that I can’t get over how extremely dated this book feels. I’m sure that, to readers unfamiliar with the development of both Protestant and Catholic theology over the last two hundred years, the book sounds fresh and exciting. To someone who has read even small pieces of that development, the argument sounds old, and not in a good way. A new book feels old in a good way when the reader pauses to think, “why yes, that’s exactly what Plato was getting at,” or “indeed, Athanasius implied much the same thing.” A new book feels old in a bad way when the reader pauses to think, “yeah, that was a common idea fifty years ago, and here it is presented as something novel.”

And yet, there is an intriguing thread in Bell’s book that I wish I could follow further. Bell’s ideas may not be so very original, but his articulation of them reminds me less of the old, social-gospel Protestants and more of the writings of twentieth-century Catholic theologians like Henri de Lubac and Hans Urs Von Balthasar, who like Bell held out hope that Hell is not truly eternal and that all humans might eventually be saved. Bell clearly has a universal church in mind when he imagines the age to come, and I note in passing that he refers to Communion as “the Eucharist” (157). Which leaves me wondering, who is going to be Rob Bell’s confirmation sponsor?

Stephen Schuler holds a Ph.D. in English from Baylor University and is an assistant professor of English at the University of Mobile in Mobile, Alabama. He is currently working on a book about the theology of W. H. Auden.

I’ve been particularly intrigued by the conversation that has come from Jim’s post on Monday about SPJP, especially Jim’s question in the comments about…