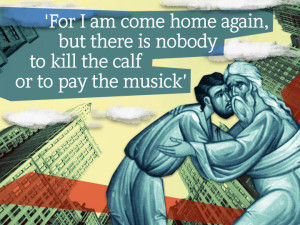 James Cave and Ewan King are not names with which I was familiar before hearing their recent album, Pay the Musick. That isn’t to say they are unknown; they have appeared at Greenbelt, established a presence on the London jazz scene, worked on collaborations with churches, been featured in the Church Times and even commissioned by the bishop of London. The duo are known together as The King/Cave Project, a title which highlights the broader aims of their collaboration which go beyond simply producing their own music.

The values and goals of the project are ones that are increasingly resonant within the world of church music. The duo seek to break down some of the barriers in our musical, cultural and ecclesiastical landscape, and they draw on a range of sources to do so. Their work is carefully shaped by interaction with theological and aesthetic discourse, they critique the staleness of the familiar traditional/contemporary ecclesiastical dichotomy and they draw on the musics of jazz, choral music, nordic worship and many others to create a project that inhabits a number of realms simultaneously. At a recent conference I attended, one of the speakers called for more danger in the music we use for worship and, whilst the default mode of church culture often seems to centre around the well-known and the safe, James Cave and Ewan King side with those within the church who look to the power of art to challenge, redeem and disrupt.

Pay the Musick is named after a line from a poem by Christopher Smart and was recorded in a small cemetery chapel in which the founder of the church where King pastors was buried. These facts are not simply curiosities of the production process, but speak of the attempt to create an album with symbolic resonance and significance, something which functions redemptively and which becomes part of God’s wider workings within the world. The album itself is made up of the elements of a service – Kyrie, Gloria, Benedictus, Agnus Dei plus a hymn. The style is hard to pinpoint, but that is very much intentional. In the words of King: ‘I want to take the subtlety, texture, and grace associated with the cathedral tradition, and to give it that compulsive energy and demand for attention that comes from rock ’n’ roll, some kinds of jazz, and from hip hop — that refusal to be ignored.’

The album is all of that – it is full of rhythmic vitality, sonic diversity, jazz harmony, rock energy and chorally-refined vocals which nevertheless come together to form a coherent (or at least a connected) musical landscape. All this means that it can take a bit of time to adjust to the experience of the album as sacred music – it doesn’t overwhelm with a sense of peaceful transcendence, it doesn’t offer a release of intense emotion, it doesn’t verbally articulate a theological journey and it’s not immediately graspable in a straightforward manner. This can be unsettling at times, however, the beautifully-produced sounds of the album invite us to open ourselves up to this different way of interacting with the sacred, one that draws us out of ourselves and offers us a God of surprises, of rich complexities and of dynamic life.  Much of the music seems to challenge passive modes of listening, almost demanding bodily participation as well as auditory attention to fully experience what it offers.

If the album challenges our personal expectations of sacred music, it also challenges us to evaluate our expectations of corporate worship (it is, after all, in the form of a service). To begin to bring this kind of music into the weekly life of the average congregation isn’t something that could be done without a certain amount of musical adaptation and disruption. However, that may well be part of the point – the challenge of this music is one that requires thought, creative effort and appropriate contextual re-working. I think that there are a surprising number of musicians and congregation-members within parts of the church who are ready and eager to take up precisely this task.

For more information about this project, please visit the following links:

The King/Cave Project
Pay the Musick

Mark Porter grew up on the Isle of Wight but now lives in Oxford, where he studied. He completed his Masters at King’s College London, and is currently pursuing a PhD at City University London exploring issues of musical taste and identity at the interface between praise and worship music and everyday musical life. He has a keen involvement with music within and outside the church and enjoys pushing boundaries of creativity and community.