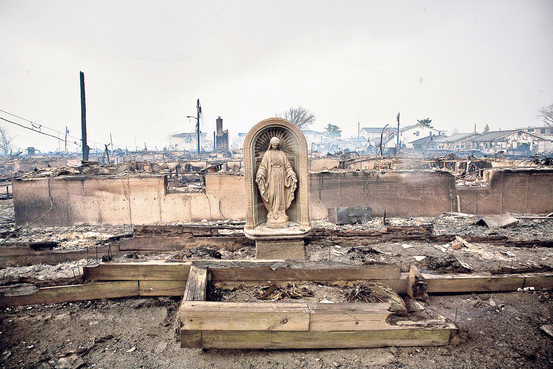 In the aftermath of Hurricane Sandy, one image in particular has drawn attention: the Breezy Point Madonna. This stone lawn statue of the Virgin Mary remained standing when the house to which it belonged, as well as about 100 others in the Breezy Point neighbourhood of Queens, New York, burned down during the storm.

The Madonna has become a pilgrimage site. A recent New York Times article lists the gifts that visitors have laid at the statue’s feet: ‘a bouquet of yellow roses, four quarters, a votive candle, a memorial card for the victims of Sept. 11, a written admonition that healing begins with acceptance’.

Ellen Mathis Kail, a teacher at a Catholic school in Colorado, rescued a pot of living violets from the rubble of a neighbouring house, and brought them to the shrine. As the Times reports:

“It was so bleak, so horrific,” Ms. Kail, 44, said. “And I thought maybe if I left some color, some hope, it would brighten someone’s day, just to think someone is praying for them.”

Ms. Kail’s statement of intent is a simple one, but it reveals the relationship between beauty, hope, and love.

First of all, there is the identification between colour and hope, in contrast to the identification between bleakness and horror. If one looks at the original photo in the Wall Street Journal (above), one sees a monochrome portrait in shades of brownish-grey – smoke, concrete, charcoal. However, in the updated New York Times photo (below), the added pots of flowers (an orange bloom in addition to the violets) create a new bursting forth of life in the image, which is also made more radiant by the fresh layer of snow on the ground. The image of perseverance amidst devastation has become an image of baptism into new life.

Why does this colour speak to us of hope? I can think of three reasons. First, when we look at Nature, we see that colour is usually associated with life. A meadow of wildflowers is more colourful than a scree of shale. Second, claritas is one of St Thomas Aquinas’ ‘three conditions’ for beauty in his Summa Theologica, along with integritas and consonantia – ‘things are called beautiful which have a bright color’ (ST I.39.viii). This beauty speaks to us of God, because the Son images forth the Father in beauty (ibid.). Third, we know why this colour was placed. When we see the pots of flowers at the feet of the Madonna, we know they were placed there intentionally by another human being, and so this colour speaks to us of love and gratitude.

And this brings us to a second aspect of Ms. Kail’s statement: the idea that this colour can ‘brighten someone’s day’ because its presence means that ‘someone is praying for them’. Certainly, the prayers of the Virgin Mary are sought by those pilgrims who leave gifts at her feet. But the gifts speak of prayers requested for the entire community, not just the giver. The pot of violets was placed with the intent of brightening someone else’s day. The Sept. 11 memorial card connects the Madonna to the Ground Zero cross and other images New Yorkers (and Americans) have claimed as symbols of God’s care for their community.

By adding colour to the blasted landscape, the pilgrims to Our Lady of Breezy Point have created an image of beauty that speaks of their love for their neighbours. Their work is a response to God’s love as expressed in the survival of the Breezy Point Madonna, and, indeed, as first expressed in the saving donation of His Son to mankind through a Virgin’s womb. The new shrine of Our Lady of Breezy Point is an example of how God’s love, when responded to with love, results in an efflorescence of beauty, which invites others to participate in His promise of rebirth as well. 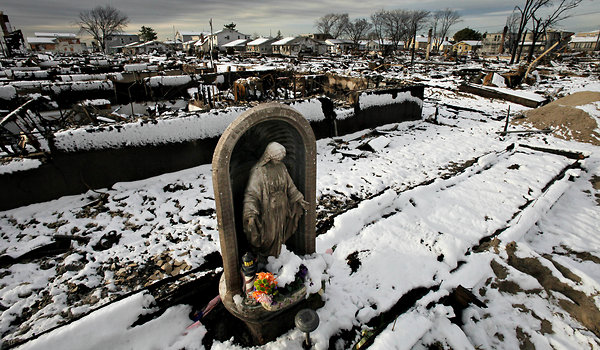 Image credit: Images are re-posted under the ‘fair use’ provision of the U.S. Copyright Act (17 USC § 107), for purposes of ‘criticism, comment,…[and] scholarship’.

Br. Christian (Cole) Matson is a novice at Portsmouth Abbey in Rhode Island. He received his PhD from the Institute for Theology, Imagination and the Arts in 2016.

Since 2011, we have created and implemented original theatre pieces (sometimes scripted, sometimes improvisational) into ecumenical Christian worship at Yale Divinity School. Rather than…