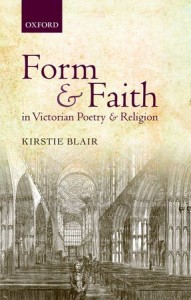 In this book  Kirstie Blair, lecturer at the University of Glasgow, reconsiders the vitality of faith in the Victorian era, an era often characterized as increasingly secular. As a key voice within a growing group of scholars lending fresh eyes to Christianity’s presence in Victorian poetics,[1] Blair draws upon a wealth of nineteenth-century Tractarian thought, church architecture, and High- as well as Low-Church liturgical imbroglio to reveal the pervasive imprint of religious form on the Victorian imagination.

Blair’s work lives at the intersection of faith and form, and provides an interdisciplinary response to Charles Kingsley’s 1853 inquiry: “How can you put into form that thought which is by its very nature formless?”[2] Commencing with an accessible reading of Tractarian poetry, wherein the author’s basic premise that “When Victorian poetry speaks of faith, it tends to do so in steady and regular rhythms” is illustrated, Blair expands her poetic purview to expose an aesthetic understanding of form that is fundamentally religious. Thus when Tennyson writes, “I dread the losing hold of forms,” it is less a poetic dismissal of Victorian aestheticism (i.e., “form for form’s sake”) than an existential defense of religious practices then under debate.[3]

By tracing the Victorian defense of form, and more specifically the Anglo-Catholic resurgence of formalism under the influence of the Oxford Movement between 1830-1880, Blair places the artist alongside the clergy in molding religious practice and presence within a culture in transition. The composite picture reveals less of an institutional struggle to combat secularism than a many-handed and creative effort rooted in the religious desire to embody faith in something that might appeal to the senses and give form to the formless.

As a result of Blair’s inclusion of church architecture and liturgy within a wider meditation upon form, her treatment of Victorian poetry and particularly the function of meter and rhythm in mirroring a liturgical performance seems redemptive in some sense. Blair herself acknowledges the critical dismissal of Victorian meter as stuck within a “sickenly regular beat” from the start, but by placing familiar poems like The Cathedral within a larger matrix of religious formalism we grow more appreciative of the simplicity and significance of rhyme:

The gladsome soul that her devotion plies,
Bound in the wreath of ancient Liturgies,
Why should she not her chain beyond freedom prize?[4]

For Blair, as for the poet, the adherence to poetic restraints for the purpose of a better poem reflects the liturgical forms of the Church.

Where Blair’s project excels in scope and originality is its ability to provide historicized readings that place canonical poets like Lord Tennyson, Robert Browning, Elizabeth Barrett Browning, Thomas Hardy, Gerard Manley Hopkins, and Christina Rossetti within a religious framework without falling into caricature or the familiar critical trap of a secularization narrative.

But what might faith without form look like? If the Romantics prefigure a glimmer of this breach in their poetic assay of the sublime, it will be modernism’s complete break into the interior that leaves us wondering what the Victorian “form” overlooked.

Do we in fact believe that “where there is form, there is faith”?[5] And if so, what are the implications of a form-bound faith for us today?

If Blair succeeds in revealing the solidifying function form played in the religious imagination of Victorian England, her elision of a very real process of secularization and the consequences of that process make it difficult for the reader to make sense of a form-less faith.

Denny Kinlaw is currently studying for his MLitt in the Institute of Theology, Imagination and the Arts, St Mary’s College, University of St Andrews.  Before coming to St Andrews, Denny conducted research for Kirk Documentary Group in Boston, MA, producing documentary films for PBS FRONTLINE. He received his BA in English, American Literature and Language from Harvard University in 2008. His interests include American Literature and the intersection of literary theory and theology in the work of David Foster Wallace.

1. These scholars include Charles LaPorte, Tracy Fessenden, and F.E. Gray, each of whom have published considerable works re-examining Christianity and Victorian poetics in the last five years.
2. Blair, 1.
3. ibid., 6.
4. Williams, Isaac, ‘Forms’ from ‘The Cloisters: Ecclesiastical Sonnets’, The Cathedral, 12, II. Ibid, 222.
5. Blair, 2.

0
Facebook Twitter Pinterest
LinkedIn Email
Written By
Denny Kinlaw
More from Denny Kinlaw
“…some to church repair, / Not for the doctrine, but the music there.”...
Read More