At the Kunsthistorisches Museum in Vienna, there is a room featuring a number of paintings by Flemish Renaissance artist Pieter Bruegel the Elder. Vibrant in colour and detail, many of Bruegel’s paintings can appear like a Renaissance version of a ‘Where’s Wally?’ book—the smorgasbord of characters on the canvas suggest a frenzy of activity, and one has to pay close attention to each individual figure to grasp the nuance embedded within the whole. There is an expansiveness to the paintings, an openness which invites viewers to take their time, to let their eyes wander, to explore and discover. Standing in the Bruegel room and observing masterpieces like The Procession to Calvary, The Tower of Babel, and Conversion of Paul, I was struck by the sense of childlike wonder the paintings evoked within me, a curiosity which invited me to look closer. This is not unlike the ‘Godly Play’ approach to Christian education advocated by Jerome Berryman, an imaginative play-based model which emphasizes discovery and curiosity. In Godly Play, children are not told who God is; they are instead invited to enter into sacred story, parable, and liturgical action in ‘a seriously playful way’. [1]

Perhaps no other of Bruegel’s works evokes the childlikeness of Godly Play as does his painting about children: Children’s Games, a 1560 oil painting featuring depictions of some two hundred children playing more than eighty different games. Looking at the painting from a distance, it appears to be a simple town square, with a single street leading up and away to the right while a nature scene of trees and a brook are in the upper left; these scenes frame a large stone building. Scattered about this scene are figures of children, each engrossed in a particular activity. Their sky blue and rusty red clothes stand out against the sandy brown earth of the open square, prompting our gaze to jump from one scene to the next and examine what we may find there. The games range from the wonderfully familiar (somersaults, handstands, piggyback rides, leapfrog, marbles, dolls) to the strikingly odd or vulgar (a squatting boy urinating or a girl stirring a pile of animal feces with a stick). 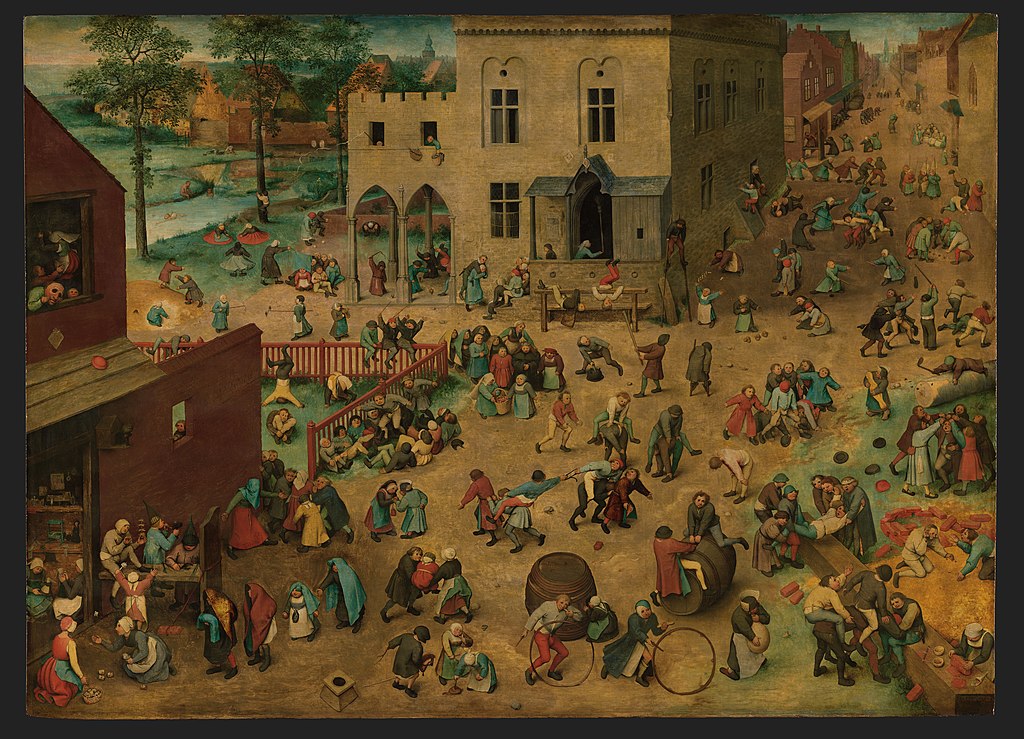 In his book Inside Bruegel: The Play of Images in Children’s Games, Edward Snow suggests that Bruegel includes two instances in the painting of contrasting visions of childhood. In the first, two faces appear in the window of the building in the left foreground: one is diminutive and wistful, the other sports a frightening adult-sized mask, perhaps with the intent of scaring someone in the street below (Fig. 1). Similarly, Snow suggests that Bruegel repeats this contrast in the second instance: in the two windows above the archways in the centre building, a small, happy child appears and dangles a long streamer from the left window, while a larger, seemingly older child brandishes a basket of objects (Fig. 2). 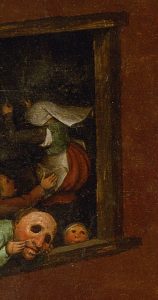 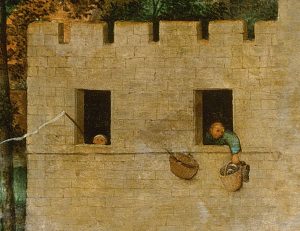 Snow suggests this older youth may be waiting to drop the basket on pedestrians below, though I see how the child could equally be retrieving the basket from the elevated trolley line. Writing about the mask-wearing child and their pug-nosed counterpart in the window, Snow argues that these two sets of dual faces represent multiple contrasting ideas about the nature of childhood itself:

Most obviously, [the two children] juxtapose antithetical versions of the painting’s subject: the child on the right embodies a blissful innocence, while the one on the left makes himself into an image of adult ugliness. But they also suggest an ironic relationship between viewer and viewed: we see a misanthropic perspective on childhood side by side with a cherubic instance of what it scowls upon. And at the level of our own engagement with the painting’s images, the faces trigger opposite perceptual attitudes: one encourages us to regard appearances as innocent, the other to consider what is hidden beneath them. [2]

In other words, Children’s Games contains a contrast between the childlike and the childish. The latter holds negative connotations of puerility and pettiness, where the former suggests an idealized purity, curiosity, and joy. Snow suggests that we feel this tension within ourselves as we experience the painting from an adult perspective—we are both critically analyzing the painting as mature adults even as the painting evokes a nostalgic remembrance of and longing for our own childhood experiences and sense of wonder. And both are acceptable; indeed, true adult maturity may require a return to childlikeness, which is perhaps more ‘adult’ than we originally imagined. This both-and paradigm is akin to the posture of Godly Play, which assumes that children are capable of experiencing adult-like (read: human) existential or spiritual questions, even if those questions are mainly intuitive or imaginative rather than linguistically or logically constructed. Children have the human capacity to believe, to doubt, to wonder, to reflect. Both Godly Play and Children’s Games promote the use of imagination as necessary and beneficial for addressing such existential questions. Snow suggests that Bruegel’s painting even ‘thinks’ in images—rather than merely cataloguing various children’s activities from Flemish peasant life, the painter was dialectically examining the nature of childhood itself through the myriad of contrasting images. In other words, Children’s Games is a sort of vast visual theology of childhood.

So, when Jesus said, ‘Let the little children come to me, and do not hinder them, for the kingdom of heaven belongs to such as these’, do you think he meant it? That is, that the kingdom of heaven—the reign of God through Christ over all of the created cosmos—is essentially a child’s environment? Of course, we often assume this is a more childlike than childish kingdom. But both Bruegel and Berryman value the entirety of the childhood life stage, its positive attributes as well as its seemingly messier or immature aspects. Indeed, this is where Bruegel is instructive: for all of its apparent high-class aesthetic—the painting is located in a Viennese art museum, the epitome of high culture—Children’s Games is quite down-to-earth and modest, even silly. It’s a bunch of kids goofing off and it’s an exemplary work of Renaissance visual art; it is childlike and childish, because it values childhood as a whole. Bruegel likely observed such behaviors in children in the actual peasant life of Flanders and chose to capture them in his painting for us to consider. So, perhaps we may follow in Bruegel’s example, learning more of what the kingdom of heaven is like by looking to a playground, a nursery, or a toy box, and observing the divine beauty and wonder of children in their glory. Indeed, as Jesus told his disciples, ‘Truly I tell you, unless you change and become like little children, you will never enter the kingdom of heaven. Therefore, whoever takes the lowly position of this child is the greatest in the kingdom of heaven. And whoever welcomes one such child in my name welcomes me’ (Matthew 18:3–5, NIV).

Joel Mayward is a pastor, writer, theologian, and film critic. He is a PhD candidate at the University of St Andrews researching the intersection of film, theology, and ethics. For his film reviews and essays, check out www.cinemayward.com. Follow Joel on Twitter: @joelmayward.

Diary of an Arts Pastor recently listed his top 41 artist biographies.  The Agony and the Ecstasy, Irving Stone’s biography of Michelangelo, made no….