‘He was not a bad man but he was also not a nice man either. I am not sure that being nice was actually a part of his job’.

When one is looking to be inspired by an uplifting tale of Christian heroism, few would probably first look to a new French horror television series focusing on witches and demons like Marianne. Audiences may be familiar with the demon movie trope of the naïve or even villainous church exasperating problems and leaving the protagonists to solve issues themselves (e.g. The Amityville Horror, The Last Exorcism). Another horror trope currently in vogue they might also remember is the one that either resists the entire concept of evil altogether or makes such claims as ‘the real monster was inside us all along’ accompanied with barely veiled allegories for sexism, racism, etc. (e.g. It Follows, Get Out). Though these tropes (and tropes in general) are certainly not a bad thing, many horror stories can seem stale and their endings predictable; that which was shocking last year becomes the norm of today. In a stroke of pure genius, director Samuel Bodin tricks the viewer into thinking this story might use one or both of these two modern tropes just mentioned before revealing a eucatastrophe that truly lifts this series above its peers. 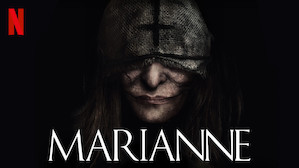 The viewer is introduced to the protagonist Emma (Victoire Du Bois) as she is on a book-signing tour to promote the final effort in her young adult horror series about a female demon hunter named Lizzy, who tirelessly battles against an evil demonic witch named Marianne. From the crowds, you can see that Emma is a literary rock star and enjoys fame and riches few authors can boast about, but some dark shadow seems to follow this seemingly glamourous life. She is a raging alcoholic who chases away her boyfriend and potential friends, with her only real support coming from her publicist, Camille (Lucie Boujenah). We learn she is plagued by horribly realistic nightmares where the witch Marianne comes to life to haunt and torture her. She reveals that these nightmares have been part of her life ever since she was little. Bracing for the predictable dramatic irony, the viewer may wonder what trauma caused these nightmares: Was she abused as a little girl? Did she come to Paris to escape her abuser?

When dark circumstances bring Emma back to her tiny seaside hometown of Eldon, she is met by an angry priest ready to sic his German Shepherd on her, telling her she was ‘never supposed to come back’. ‘Aha!’ the viewer may exclaim; ‘the priest abused her and sent her away to cover it up!’ One could be forgiven for this knee-jerk interpretation because the priest really does seem quite villainous at first. Flashbacks show him constantly harrying and chasing Emma and her friends as teens. The police inspector catches him coming home late to his empty little church with a dirty shovel, and he refuses to say where he was. People only show up to his run-down cathedral for funerals, and thus in enlightened modern-day France he perfectly fits the picture of a grouchy relic of the past, refusing to weather away like the dingy church in which he lives.

What is entirely unexpected is that it is not Emma, but Father Xavier (Patrick d’Assumçao), that very same haggard priest, who is the hero of this tale. Emma and her friends struggle with the escalating torture from the dark spirit Marianne, but trying all of the clichéd tricks from horror movies to defeat the demon only seems to make matters worse. As the Witch’s work in Emma’s life becomes clearer, she begins to see the priest in an entirely new light and also comes to see that what she thought were curses were actually blessings. Ultimately, it is the grimacing self-sacrifice of this little man of God—who through gritted teeth shouts to the demon ‘I am not the praying hands of God…oh no…I am His fists!’—which elevates this horror story up to the light of the heavens. In a bleak world where the Catholic Church is often more recognised for its failings and deemed a target of ire and mocking, Xavier reveals the purpose of these little rundown churches and their forgotten keepers: to be ever watchful for the movements of the kingdom of evil and be prepared to defend a people who offer no thanks in return. As Emma states later, Xavier is not a nice man, but being nice is not his job; his job is to put himself between the naïve modern world and the darkness that would swallow it whole. The ever-present antagonist of her childhood reveals himself to be an imperfect but necessary hero, and the real image of what a ‘warrior of God’ looks like (one who never harms a living soul but reserves his metaphorical fists for the kingdom of darkness).

The series makes surprising references to various literary elements that the avid reader might recognize from Dante’s Divine Comedy and even from Milton’s Paradise Lost. There are many references to the ‘Dark City by the Sea’, the place where Marianne takes her victims to introduce them to ‘great kings with ambitions far beyond her own’. This brings to mind the legions of the Miltonian Satan with their skyward ambitions to be gods upon the yet unformed earth, to mock God by creating their own heaven within the realms of hell and beyond. Descriptions of the demonic city, such as the intimidating blackened walls and towers that the viewer does not yet get to see, also seem to reference the specific vision of Dis made by Dante in Inferno. These references show that there is much more to the world of darkness in the series than the mere actions of Marianne, who seems to see herself as a mere peasant with negligible goals in comparison to what awaits the protagonists. The plot leaves this side of the tale open and seems to be world-building, which this author hopes to see more of in the next season of the series.

Marianne as a story manages to avoid many of the trappings of more average demon-centered horror stories through the eucatastrophe of its end; it feels more like C.S. Lewis’s Till We Have Faces than The Exorcist as we are left to question our own motives and interpretations instead of the goodness of this world. We see a story that does not mock God, like the titular demons love to do, but gently wonders aloud as to whether we are taking our local churches for granted. It turns the feelings of the enlightened youth about the Church in the postmodern world on their head. It warns the viewer off from merely discarding the morals and institutions of the past, for they were the walls that kept other more sinister things of that past at bay. It also shows that bored teenagers sometimes do dangerous things to avoid looking into the nihilist abyss, be it sex for the mere fun of it, binge drinking, desecrating institutions they don’t understand, or even participating in a séance (as Emma and her friends do in this series). To paraphrase C.S. Lewis, ‘one should not call upon gods they do not believe in, for what will one do if they actually show up?’ Marianne was the consequence of such boredom, as the goofy teenage séance Emma participates in turns from a mere nightmare in the realm of sleep into a waking nightmare that refuses to end. Xavier corrects a long-standing misunderstanding of the character of God when he assures Emma that it is not God who is punishing her, for ‘he is far more difficult to offend than me [Xavier]’. Ultimately, this demonic horror story leaves the viewer with that message: despite the rebellion and all the mistakes Emma makes, God has not and will not give up on her (or on us).