[EDITOR’S NOTE:  To begin our monthly Transept series, ITIA’s Giulia Privitelli presents a poignant, richly evocative reflection on the first meetings of the Transept group this year, framing this collaboration as a response to ‘crisis’. Inspired by three diverse artworks created by Transept members, each exploring the theme of ‘transpositions’, Giulia’s writing conveys the power of art to both reflect and reconcile ‘brokenness’, finding intimations of hope amidst chaos and disruption. And it is these hints of wholeness and glimpses of light that will continue to flow through the work of Transept and into the words of Transpositions throughout the coming year.]

I allow them to flow in: verses about the sea, the dashing waves, breaking on the rocks. Momentarily, I am there, surrounded by the salt and the sand, the wind, and the mist. The clouds thicken and the sea is no longer there; it never was, nor were the waves, the rocks, or the sand. The screen flashes and two halves appear, a circle broken down the middle, gleaming white where the charcoal dust could not settle. I lean closer, as if it were a white-hot sun pulling me in, and my ears catch the sound of a faint melody echoing from within. I am transported now to a stranger’s garden, a domestic Eden, imagining Eve as she names the plants and trees. A voice and a hymn-like chant, looping until it cuts, like Larkin’s ‘cut grass’, [1]  it ends and ‘dies in the white hours’ of noon, and I blink. Awake, in my sitting room, I find myself once again staring at a screen. Faces stare back at me. Or not. I cannot know­. Not here, where our eyes cannot meet.

There is something deeply strange about how—over the past several months—we have been engaging with reality and with each other. It is, in a sense, similar to an exercise of repeated waking, a sort of emerging from a vivid dream state; a process of crossing between disconnected worlds, time, and spaces.[2] In this waking world of virtual reality, presences are acknowledged as absences; entire landscapes are flattened into virtual spaces; full and embodied voices reduced to echoes of what they were. 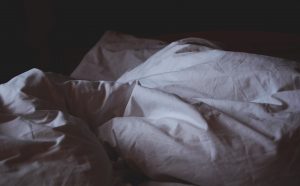 The impoverished waking world pales in comparison to the dream-reality that came before—a longed-for state of brilliant colour, form, and potential. Between the two is a chasm which, as we come to our senses, we are compelled to cross. Yet, there is a moment—however brief—in which we can choose to dwell on the side of latent dreaming. It is in that suspended moment of choice that a crisis, in the true sense of the word, awaits us. And it is here, too, at this crossing, that Transept artists chose to share their work during a recent online meeting, with a longing eye on things past and another on the promise ahead.

Three artists presented their work remotely: a poem, an abstract image, and a voice-soundscape composition. Although the working prompt was the notion of ‘transpositions’, there was a further ‘condition’ that all three works also seemed to suggest: brokenness—itself an implicit result and indication of transposition.[3] This might have had something to do with the ‘broken’ way in which the artists were conditioned to share their work: in a virtual space where images freeze, voices break, and audio feedback competes with our own. Yet, apart from the ‘broken’ means of transmission, their artistry nonetheless revealed how, as the exuberance of life is chipped away into mere essentials, to the irreducible scraps that we desperately cling to, broken pieces are all that we have left to give us some semblance of the unity we most desire. We may observe the same pattern in the seas that form where the land breaks off, or the flower and tree from the broken seed, or the broken grain from which bread is made. And even that bread is then broken to break our hunger, our dissatisfaction with the crumbs that have fallen to the floor. 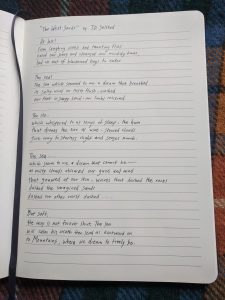 Yet creativity also aims to reconcile these broken pieces. Jonathan Selstad’s poem ‘The West Sands’ is itself constructed of a series of broken verses, rolling into each other towards a cohesive whole.

Read aloud twice, the excited staggered breath comes to a calm and soothing close, as if a bodily and linguistic transposition of the rising and falling rush of the sea, and—at last—the peaceful aching of a longed-for dream:

But soft,
the way is not forever shut. The sea
will calm his wrath then send us eastward on
to the mountains, where we dream to freely be.

Nature too beckons Jane Pettegree to turn her ears to the sounds that already exist. Isolating sounds from the constant soundtrack of nature both distinguishes them and allows them to be brought together with others as they are shaped into a new form, a new soundtrack (you may listen to it below). In the resulting atmospheric soundscape, the listener’s attempt to make out the words of the ethereal song that loops and echoes amongst the piercing clarity of the birds’ notes is an exercise in longing. Meanwhile, the process of naming, of singling out several different plants, flowers and trees—as we hear in Eve Names The Plants—is an activity that both isolates and harmonises. To identify something as distinct, and hence broken, completes the image of a blossoming garden.

Brokenness then—as the absence of a whole—has been expressed in the form of nostalgic longing and isolated harmonies in the two works mentioned so far. Dan Drage develops this state of brokenness not through a meditation on the feeling of absence but through a material depiction of it. Taking the remains of his daughter’s lunch—two pieces of semi-circular foil—and scattering charcoal dust across a blank page, the resulting image is one of absence, of negative space. 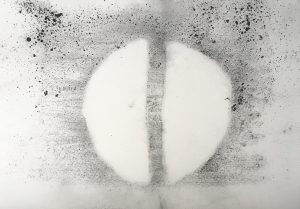 The foil that once wrapped his daughter’s bread, gives form to a broken circle by preserving the whiteness of the paper. Form emerges from the absence of the charcoal, but the form itself is negative space. Beyond the piece’s allusions to the broken bread of the Eucharist and its promise of wholeness, there is a further implication of brokenness—the brokenness of perception. For there are instances in which we find ourselves looking at something only to realise that there is nothing and, conversely, searching around in nothingness in the hope of detecting something.

The brokenness of perception, that swings between presence and absence, has become all too evident over these past months, as creations and performances have been shared remotely across cultures, time, and space. It is, perhaps, nothing short of a ‘happy’ coincidence that the early modern use of the term crisis referred to a threshold moment in the progression of a disease: a turning point that would lead to either a continued degeneration of the situation, or a revival.[4] Derived from the Greek krinein (‘to separate’), a crisis thus signposts a fork in the road. It is the decision that characterises what kind of crossing it will be and where it will lead, even though there is no way of knowing with certainty.

For there are instances in which we find ourselves looking at something only to realise that there is nothing and, conversely, searching around in nothingness in the hope of detecting something.

Uncertainty is one of the daughters of a broken perception. On the one hand, it tempts us back across the critical bridge—to the way things were, back into the dream state—and, on the other, it invites us to question the way we see. We can choose to dwell where there is nothing of value or to venture into apparent ‘absence’, with the hope of experiencing a fuller and more satisfying way of being in this world. There is, then, an unparalleled value in the impoverished system that seeks to ‘transpose’ its richer counterpart. It is, if nothing else, an ambivalent reminder of where we would like to go.