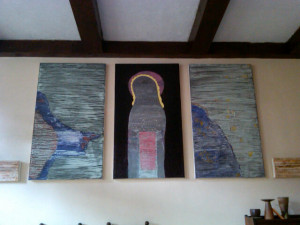 Editor’s Note: This is the second post in our new Artists in Residence series, a series intended to draw working artists like Bruce Herman, Alfonse Borysewicz and Makoto Fujimura into the theology/arts conversation here on Transpositions.

I would be less than honest if I didn’t admit that over the past several years I have had grave doubts about my vocation as a painter, and not only doubts about painting, but despair of the notion of vocation itself. These ideals, for lack of a better term, seem quaint and obsolete in my middle years of life.

For as long as I can remember, I have owned the title (and book) of Zsigmond Moricz’s Be Faithful Unto Death, clinging to choices I have made and honoring the sacrifices my family and I have made. I find it quite difficult, now, to entertain the thought of starting another painting. It seems redundant when so much of our attention is now distracted by our technological prowess. Fortunately I have a muse who can sustain me through my doubts and keep the lamp on, but when the medication of human affirmation has worn off, reality creeps back in. I have enumerated on this many occasions and so I run the risk of being repetitive.

Suffice it to say that galleries are a fiction and churches are more or less silent in welcoming projects outside their comfort level of  the many Duchamp ready-mades that monopolize their sacred spaces. With such limited options I have retreated to my own living quarters, a 4th floor walkup apartment in a not so fashionable part of Brooklyn, my “upper room” with the economy of salvation on its walls. This ambition minimizing has been healthy for me (at least that’s what I keep telling myself).

My religious affinities are visible to everyone who enters this upper room, and I’m not displeased with this prospect since my work confronts a hollow hole in the popular humanism so many seem to have swallowed. My son’s college friends, not being well-versed in Christian iconography, just think our place looks like a cool Zen hideout. I have a new Last Supper on the walls, influenced by Giotto’s scene in the Arena Chapel. Obviously a drama is unfolding before their eyes, but underneath Judas, Jesus and John, ESPN competes for their attention on our very small screen TV. I am not afraid of competition, but there is an eventual choice to be made. I am not going to force it.

The ever insightful Leon Wieseltier wrote recently how his mind, consumed by the arguments of war, the Arab Spring, leadership etc., was surprised by something he saw while taking a walk:

I turned a corner and eyed something that emptied my head of everything analytical and carried me far away from the universe of public reason. What I saw was a high, gorgeous pile of figs. I was instantly elated. They were the nubile tokens of a distant and different place, and so they had a beckoning quality, and held a small promise of flight. To see them was to see where they had come from, which was not from here; to see where I was and where I was not; to be here and to be there; to be elsewhere.[1]

Just a few miles away from my place, one of my Madonna paintings hangs in the computer lab of a local Catholic college. This long, horizontal work depicts our Blessed Mother with a direct stare. I purposefully chose to hang her in that spot, hoping to engage the students when, and if ever, they looked away from their computer screens.  Anyone can view this scene since it opens up through a large window on the street. I wonder if I, its author, am the only one aware of the tensions in the scene described? Does anyone really care? I wait fearfully for that day when my painting might not be there, replaced by a large screen TV. But that day has, thankfully, yet to come (perhaps because the painting is anchored by the price tag that was paid in full). I check on my Madonna when I can, happy for her continued quiet presence like the pile of figs. This keeps the lamp on for me, and I hope for others as well, a blessing on how I have decided to use my life.