Question: What do Daenerys Targaryen, The Unburnt, Breaker of Chains, Mother of Dragons, and yourself—with fingers hovering idly over trackpad and eyes bouncing across lines of internet text—have in common?

I answer: Enchantment. Both cultures are defined increasingly by perspectives that recognize the world as containing mysterious realities beyond the ability of human calculation to account for and master. For further explanation of this comparison between yourself and the Khaleesi of the Great Grass Sea, read below.

The word “re-enchantment” has come into its own as the scholarly term of choice to denote the West’s increasing shift from a “secular” to a “post-secular” perspective. The term itself is an academic throwback to sociologist Max Weber’s characterization of early 20th century society as “disenchanted,” in which, ‘There are no mysterious, incalculable forces that come into play, but rather that one can, in principle, master all things by calculation.’ As might be expected, the term “re-enchantment” serves as an indictment of Weber’s rationalistic understanding of the modern world. Of the academics who use the term enchantment in their work, Christopher Partridge and Jeffrey Kosky emerge as two figures for whom the word carries very different connotations, effectively representing two competing visions for what the “post-secular shift” in the West really means.

Cultural anthropologist, Christopher Partridge adopts what could be called a classical view of post-secularity, namely that prevailing religiosities in Western cultures undermines the secularization thesis. Partridge concludes that the West is in an era of “re-enchantment,” in which the emergence of non-traditional spiritualties have reintroduced societies to elements of wonder and mystery incompatible with secularism’s strict rationality. [1] 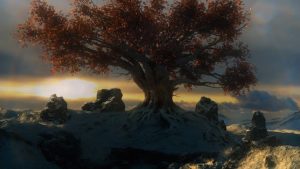 Theologian and Art Historian Jeffrey Kosky, on the other hand, disavows the use of the term “post-secular” altogether. Kosky repudiates what he sees as the term’s common co-opting by fundamentalists to suggest ‘that secularity has been eliminated, or otherwise put behind us, and then when this elimination of secularity is announced with rejoicing.’ [2] Like Partridge, Kosky aims his critique of traditional secularism at its emphasis on rational cognition as the only sure form of knowledge. However, he does not see the West’s increasing re-enchantment as necessarily a feature of the religious perspective contra secularism. Re-enchantment, for Kosky, can equally be society’s impetus toward the development of an “enchanting secularity,” a secularity that acknowledges both mystery and wonder as vital to human experience and knowledge. [3]

Together, Partridge and Kosky welcome the re-enchantment of human epistemology that they see flourishing in present-day Western societies, but they remain divided as to what this re-enchantment means for current forms of secular thought and institutions. Their division marks the boundaries of the shaky space Western cultures are beginning to inhabit. Does the reopening of the human mind to attitudes of wonder and mystery ring the death-knell for modern secularity? Or could the admission of the sublime beyond rationality lay the groundwork for a new and strengthened secularity, one that is able to offer the human subject both reason and enchantment, without recourse to the religious?

This thought-space between post-secular re-enchantment and enchanting secularity has seen significant treatment in recent years. While the word re-enchantment may for now be the property of the academics, a sense of mystery invading a once rationalized world has found multi-form expression in that most popular medium of popular culture—film and television.

Prominent examples include the proliferation of superhero blockbusters, the return of the perennial Star Wars Saga, and most intriguingly, the HBO adaptation of George R.R. Martin’s fantasy novel series, Game of Thrones.

Game of Thrones situates its viewer in the fantasy kingdom of Westeros, a land inhabited by humans of High Medieval development, just on the cusp of civil war.

Though set in a world in which some fantastic elements are part of the natural universe (dragons are real creatures, some forms of magic are commonly known), the show unfolds a narrative of a culture that for many generations had grown disenchanted, more rationalized in its thought and secular in its power structures, but is just now beginning to feel the stirrings of re-enchantment.

The re-enchantment in Westeros occurs within the spheres of two faiths, which respectively reflect Partridge’s and Kosky’s visions of enchantment and secularity. One of these faiths is that of the “Old Gods,” the folk religion that was the earliest known belief system in Westeros and is still practiced in the kingdom’s north. The Old Gods were worshipped at Westeros’ weirwoods, groves of white-barked, red-leaved trees with faces carved into their trunks. Throughout the series these trees have been a source of miraculous visions for Bran Stark, whose journey northward has demonstrated the prophetic power of the Old Gods and their intimate connections with the natural cycles of the earth.

The second faith to evince re-enchantment in the show is the Cult of R’hllor, the Lord of Light. The Cult proclaims the Manichean gospel of a deity of light and good at war with a Dark Other who embodies evil and chaos. The priests and priestesses of R’hllor have long possessed the gift of prophecy and the ability to extend natural life, but only in the show’s timeline do they discover the power to raise the dead by their prayers to R’hllor.

As might be expected, these two faiths differ markedly in their approaches to their relationships with secular political structures. The way of the Old Gods is non-, even anti-political. Though the way does not advocate anarchy, its view of stability transcends human organization to focus on natural harmony. It does not denounce secular political systems, but insists that these systems not interfere with the individual’s spiritual life. The Cult of R’hllor, by contrast, is aggressively political. Though the Cult appears to genuinely believe in two opposing spiritual forces, it also professes a conviction that large scale political events participate in that struggle for various sides, and that a messianic conquering figure is promised who will usher in R’hllor’s kingdom on earth. Accordingly, the Cult’s various clerics have backed various figures as being that messiah, with the show’s latest season concluding with two principle characters possessing equal claim to the throne of Westeros, each being backed by various members of the Cult. [4] 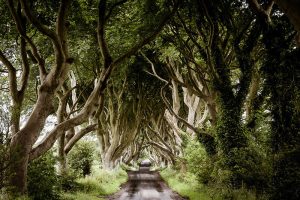 The way of the Old Gods and the Cult of R’hllor in Game of Thrones offer revealing analogues to Partridges’ and Kosky’s competing models of contemporary enchantment and postsecularity in the real world. Does the human longing for wonder and mystery so transcend secularism that contemporary re-enchantment signals the end of the secular worldview for much of the population, just as the way of the Old Gods transcends human power struggles for harmony with the Whole? Or can openness to wonder and mystery be subsumed into an enchanted secularism, just as the Cult of R’hllor backs feudal leaders who control dragons or fight ghouls? That question may be as unanswerable for the kingdom of Westeros as for our own societies. However, some educated predictions for how these tensions may be resolved in Westeros might help us in engaging what the phenomena of re-enchantment might mean in the 21st century West.

These predictions may be too concise and rosy-eyed for either 21st century transatlantic societies or for Westeros. George R.R. Martin’s fictional universe is nothing if not convoluted, and the real world, even more so. Nevertheless, Game of Thrones does invite its viewers to hope that a world of disenchanted machination is in fact giving way to one of conviction and a more honest social structure. It is also clear that a growing perspective of a re-enchanted cosmos is essential to this change. If this enchanted vision can be stewarded well by a moderate majority on both sides of the secular/religious divide, both visions will be enriched by their adherents’ relinquishing ideas of absolute mastery over the worlds they inhabit, and adopting an abiding wonder before the mysterious and inexplicable beyond human control.

For both the West and Westeros, an enchanted secularity may be the best guarantee for a society’s re-enchantment.