The famous Russian pianist and conductor Sviatoslav Richter once famously dubbed it as “the greatest comic opera of the (last) century” – and this month Benjamin Britten’s comic opera, Albert Herring, will be brought to Fife audiences by a cast of St Andrews undergraduates and local children.

On Sunday June 15, 2014 the Byre Theatre will reopen its doors for the collaborative production; which draws on the skills and talents of London-based professional director Tania Holland Williams, the University of St Andrews’ Director of Music Michael Downes, theatre practitioners from Perth Concert Hall and Perth Theatre Royal including set designer Robin Peoples and lighting designer Tamsyn Mackay, and a professional orchestra comprising players from across Scotland.

The production sounds a note of optimism for the Byre Theatre. Since the theatre ran into financial difficulties last year its subsequent long-term closure has been sorely felt in St Andrews and further afield. The University of St Andrews has proposed a major rescue package for the Byre that would result in the venue reopening permanently for university and community use. These ambitious performances of Benjamin Britten’s only full-length operatic comedy will give St Andrews a flavour of the quality and scale of production which theatre users and patrons might expect to see at the Byre in future, the University’s bid to run the theatre is accepted.

The Byre offers a wonderful space not only for theatre of all kinds but also for small-scale opera, with an intimacy that allows emotions to be clearly communicated, an acoustic that will allow every word of Eric Crozier’s superbly witty libretto to be heard, and a pit that will showcase our professional orchestra to best advantage. I am delighted that the extremely talented students who make up St Andrews Opera will once again have the chance to perform in this beautiful venue, and look forward to showing the product of their hard work to the St Andrews community as a whole. 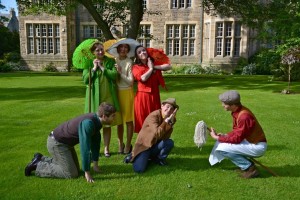 Albert Herring, adapted from a short story of Guy de Maupassant, is regarded as a classic depiction of small-town life based of the villages around Aldeburgh where Britten lived and worked. However it also holds at its heart one of Britten’s boldest, most socially revolutionary statements: urging youth to experiment, rebel and break free.

The plot centres around the May Day celebrations in the small town of Loxford. As no one can vouch for the virginity of any of the village girls, the locals decide to crown a May King instead of a May Queen. They choose the timid Albert Herring, from the greengrocers. He is less than delighted, but stuck firmly under his mother’s thumb, he’ll do what he is told. However, after one rum-laced lemonade at the May Day ceremony, Albert decides to take his prize money to town to explore for him himself the pleasures life has denied him so far.

Following a three-day run at the Byre Theatre, the production will then go on tour to the Beacon Arts Centre in Greenock (Thursday June 19, 2014) and Perth Concert Hall (Saturday June 28, 2014).

Performances at the Byre will take place at 7:30PM on Sunday 15, Monday 16 and Tuesday 17 June. Tickets are priced £14 full price/£11 concessions/£5 students and under 26 and are available from the Music Centre office in the Younger Hall – telephone 01334 462 226 or email music@st-andrews.ac.uk

Editor’s Note: ITIA’s own Christoph Mayr is involved in this production, serving as both Producer and Company Manager.