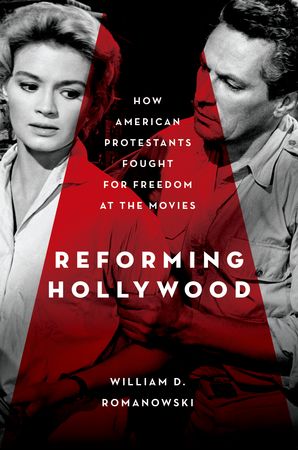 In this thorough, fact-filled account of the interaction between Protestantism and the American cinema, William D. Romanowski, Professor of Communication Arts and Sciences at Calvin College, Grand Rapids, MI (USA) and author of Pop Culture Wars and Eyes Wide Open, “aim[s] to restore Protestants to American film history and tell a story that goes to the heart of the role of film and religion in a democratic society” (p. 4). Romanowski notes:

This book investigates ways that religious views and commitments informed approaches to film as popular art, culture, industry, and social influence.  My aim is to take religious identities and loyalties seriously, while understanding that these convictions are entangled with contemporary cultural or ideological forces, whether ethnic or class antagonisms, concerns over the debasement of high culture, social hegemony, or control over the means of communication.  Indeed, I argue that religious context is essential to understanding the development of the American cinema.  As a crucial medium of communication, movies were enmeshed in, and bear the marks of, religious, cultural, and class conflicts throughout the twentieth century. (p. 9)

The story takes shape as a dialogue “between freedom and public morals” (p. 19), and involves a host of characters, including Will H. Hays, president of the Motion Picture Producers and Distributors of America (1922-1954), as well as a number of organizations like the National Board of Censorship, the Production Code Administration and the Legion of Decency.[1] These censorially-minded organizations wielded their respective constituencies, vying for power via their constituencies’ buying power.

Over time, however, the conversation shifted from regulation to responsibility and classification (i.e., the rating system), leading to “a ‘Hollywood Renaissance,’ with American movies displaying a new diversity and a high level of creativity” (p. 185). That said, this new era brought fresh challenges (e.g., explicit sex and graphic violence), challenges that were met by a new crew of would-be censors like the Christian Film and Television Commission.  Romanowski explains: “Evangelical leaders would soon reinvigorate talk of prior censorship in what looked like a throwback to the heyday of the Legion of Decency” (p. 197).

In his final chapter, “The Curious Case of Evangelicals,” Romanowski surveys Evangelical efforts at movie reform over the past twenty years or so, and concludes that these efforts have resulted in a Christian aesthetic that might be described as “Kid-friendly,” and a dearth of movies that explore “the human condition using a distinctly Christian interpretive strategy” (p. 209).

Reading Romanowski’s Reforming Hollywood seems a good place to begin for, whether it was Burke or Santayana who said it, “Those who cannot remember the past are condemned to repeat it.” And though, as Romanowski convincingly argues, Protestants certainly fought for freedom at the movies, the sub-title is a bit misleading as it implies finality, and though Protestants may have fought, it’s less clear that they are still fighting. In fact, according to Romanowski’s final chapter, American Protestants have failed to remember the past, and so instead of a movie with “a distinctly Christian interpretive strategy” we’re reading news of a Nicolas Cage remake of Left Behind.

The question which Romanowski raises, and which we are invited to answer, is how can American Protestants fight for freedom at the movies today, and promote a robust Christian vision without repeating the censorious errors of the past?

Note: A brief video interview about the book with author William Romanowski can be seen here: