A few years ago, when I taught an undergraduate ‘systematic theology for artists’ class, we looked at the traditional ways certain biblical scenes are portrayed in Western visual art. There is a grammar to them—standard symbols, colours and placement—that allow the artist to communicate to the viewer with a certain economy.

The most common subjects in Western visual art have been biblical scenes relating to the Birth and Passion of Jesus Christ (Annunciation, Nativity, Last Supper, Crucifixion, etc.). This is not because other stories were unknown, but because Christ’s Birth and Passion are essential to the theology of who Christ is and what His death means. These subjects are historically linked to liturgical feasts and mysteries of the Rosary. Artists should know these traditions, I told my students, so that we can either build on them or knowledgeably break them. 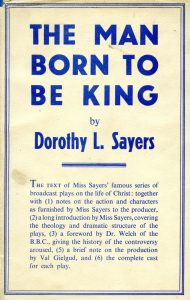 I have found a number of these iconic images in a surprising place: the radio plays of Dorothy L. Sayers, The Man Born to be King. [1] First broadcast on the BBC between 1941 1942, this twelve-part cycle covered the life of Christ from birth to ascension, using contemporary language. While working in the non-visual medium of radio drama, Sayers is often conscious of creating specific pictures in her listeners’ minds.

Besides a narrator who opens and closes each scene, all visual description is given through dialogue, like references to Jesus’ ‘short gold beard’. [2] This description itself draws upon classic depictions from Western visual art (often critiqued for making Jesus too Caucasian). Two scenes in particular show how Sayers draws upon listeners’ familiarity with traditional depictions to set tableaux that are unmistakable.

The first is from Play 1 ‘Kings in Judaea’, Scene II, as the three Kings come to visit the Christ-child. Sayers sets it in the home of a Shepherd, his Wife and their daughter, Zillah, who have taken in the Holy Family.

Wife: Bless me! And supper not cleared away and everything upside down. Here, Mother [Mary], let me take your plate. That’s better. Zillah, look in the dresser drawer and find a clean bib for Baby Jesus.

Zillah: Here you are, Mum. …One of the kings is a very old gentleman with a long beard and a beautiful scarlet cloak, and the second’s all in glittering armour—ooh! And the third’s a black man with big gold rings in his ears and the jewels in his turban twinkling like the stars—and his horse is as white as milk, with silver bells on the bridle.

Wife: Fancy! And all to do honour to our Baby.

Joseph: Take heart, Mary. It’s all coming true as the Prophet said: The nations shall come to thy light and kings to the brightness of thy rising.

Mary: Give me my son into my arms.

Wife: To be sure. He’ll set on your knee so brave as a king on his golden throne. Look at him now, the precious lamb…Mercy me, here they are.

Caspar (at door): Is this the house?

Shepherd (at door): Ay, Sirs, this is the house. Pray go in, and ye’ll find the Child Jesus wi’ his mother.

Wife: Come in, my lords, come in. Please mind your heads. I fear ‘tis but a poor, lowly place.

A number of visual art influences can be seen here. In discussing the description and number of the Magi, Sayers writes, ‘Following tradition (though not the Bible) the Magi are represented as kings, symbolising the three races of mankind, the children of Shem, Ham, and Japhet (Asian, Africa, Europe).’ [4] The Gospel of Matthew gives no number of magi, but only that they are ‘from the East’. [5] Sayers instead follows the visual art tradition, which has used three magi to correspond with the number of the gifts, and to symbolise Christ drawing all nations to himself, as Joseph here points out. For the Western painter, just as for Zillah, such visitors have also allowed scope for delighting in exoticism of dress and features.

The scene is a blur of activity as those within the house race around to prepare for the approach of those outside—except Mary, who is the still centre of the scene and whose ‘Give me my son into my arms’ begins to bring all the other characters into a familiar Adoration of the Magi tableau. Joseph is there, the shepherd family stands nearby, and the kings enter to kneel and worship. All the characters are in their appointed places.

Wife’s lines also bring out Sayers’ awareness of other theological connections. The request to get a fresh bib for Baby Jesus emphasises His Humanity, a detail that particularly captivated the children in Sayers’ original radio audience. [6] Wife’s description of Jesus as sitting on Mary’s knee as ‘brave as a king on his golden throne’ makes traditional typological connections to Mary as the living type of the Ark of the Covenant shown in another standard of Western art, the Madonna and Child. Wife’s final references to Jesus as ‘the precious lamb…Mercy me’ also connect to the Agnus Dei text from the Mass.

Clearly, Sayers delights in making connections between the theology and tradition of Western art and what her audience was picturing as they listened to her plays.

Another scene to evoke a standard of Western art is in Play 11, ‘King of Sorrows’, Scene II, Sequence 8, which is a bookend to the Kings scene. Set at the foot of the Cross, just after Jesus’ death, the sequence begins with a discussion between the Centurion Proclus—who had served in Herod’s bodyguard in Play 1, Scene I—and Balthazar, the King of Ethiopia—one of the Kings who is once again led by the stars to find Jesus. Each man in his own way now admits Jesus as King and Son of God. Their conversation is interrupted by news that Joseph of Arimathaea had come to take Jesus’ body for burial:

1st Soldier: …But the young woman is hysterical and clinging to his knees—

Proclus:…Now, my girl, I’m sorry—you don’t want him left hanging there, do you? We’re going to take him down, and this kind gentleman will see him properly done by.

Mary Virgin: Mary, my dear—come to me. There, there! You will handle my son gently, Centurion?…

Proclus: We will, ma’am…Carefully, men…Lower him by the knees and shoulders.…Have you a winding-sheet ready?

Mary Virgin: Give me my son into my arms. …I know you, King Balthazar. These are the baby hands that closed upon your gift of myrrh. This is the fair young head, crowned once with gold by Melchior, but now with thorns to be a king of sorrows… [8]

Mary Magdalen ‘clinging to his knees’ is a detail borrowed from artistic representations of the Crucifixion, rather than Scripture. Sayers writes, ‘‘The effect is intended to suggest those pictures in which Our Lady and John stand upright on either side of the crucifix, while the disheveled Magdalen crouches at the foot.’ [9] Earlier in Play 11, Scene II, to gain access to the area at the foot of the cross, Mary Magdalen had let down her red hair to remind the soldiers of her days as ‘a dancing girl’, so the listeners already picture it flowing around her, like the common depictions of the redheaded Penitent Mary Magdalene. Sayers uses a ‘Composite Mary’ character of Mary Magdalen, Mary of Bethany and the Sinful Woman of Luke 7, which is found in both theologians like St. Augustine and in much of Western art. [10]

Once again, the dialogue encouraged the listeners to imagine a whirl of activity around the stationary centre of the Virgin Mary. The line ‘Give me my son into my arms’ is again the cue for a familiar tableau, this time in what is called The Lamentation, where the Virgin Mary cradles the dead body of Jesus in her lap. Sayers writes in her notes for Play 11, ‘in the final Calvary scene, there is the suggestion of a Pieta.’ [11] Mary’s words to King Balthazar makes another strong connection to the Adoration scene and also adds to the symbolic and theological significance of the scene, as her words draw the listener to linger over the features of the body in her arms. 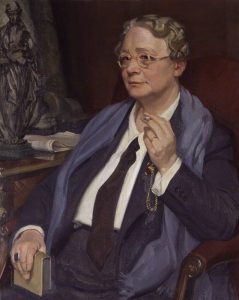 There are numerous other examples throughout The Man Born to be King, but these two scenes provide a taste of Sayers’ conscious use of the canon of Western visual art in creating her dialogue. In Sayers’ book The Mind of the Maker—which was published the same year that these plays began their first broadcast—she wrote that ‘To forbid the making of pictures about God would be to forbid thinking about God at all, for man is so made that he has no way to think except in pictures’. [12] Here we have seen Sayers putting that into action, building upon general cultural knowledge to make those pictures of Christ come alive within the imaginations of her listeners.

When I read these plays with my ‘Systematic Theology for Artists’ class, I held them up as an example of an artist fully engaged with the theology behind her work. The more I study these plays for my doctoral research, however, the more amazed I become at the depth of Sayers’ research and careful planning for the plays shown in scenes like these with the interplay between visual art, performance, and theology.

Kathryn Wehr is a PhD candidate in the Institute for Theology, Imagination & the Arts (ITIA) at the University of St Andrews. Her research focuses on the Christology in Dorothy L. Sayers' radio play, The Man Born to Be King