In the end the Party would announce that two and two made five, and you would have to believe it. It was inevitable that they should make that claim sooner or later: the logic of their position demanded it. Not merely the validity of experience, but the very existence of external reality, was tacitly denied by their philosophy. The heresy of heresies was common sense. [1]

First published in 1949, George Orwell’s dystopian novel tells the story of life in Oceania, one of three intercontinental superstates that rule a post-war world. Taking place in London, the chief city of Airstrip One (formerly Great Britain), 1984 recounts the story of how Big Brother and the Party use various forms of hard power to wrest control of every dimension of society, especially history, language and eventually thought itself. The Party jealously censors the narrative of its own history and restricts the range of its language in order to weed out the most heinous of all transgressions: independent thinking otherwise known as Thoughtcrime, ‘the essential crime that contained all others in itself.’ [2] This many-cogged machine of power, intimidation and manipulation is calibrated to achieve the goal of Big Brother and perpetuation of the state, namely mass conformity to the dictates of the Party. 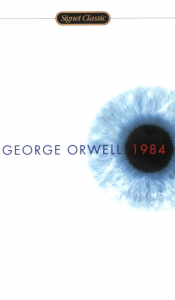 One of the reasons why 1984 strikes a nerve is that it reveals the power of words. With words, God created the world. With words Big Brother de-creates it. God spoke the world into existence saying: ‘Let there be light.’ Big Brother retorts: ‘No. Let there be darkness.’ Words ostensibly create our reality by framing it. Big Brother knows this and so it is in the business of misconstruing reality. This he achieves through the development of Newspeak, the language manufactured by the Party, and its intentional (d)evolution. [3] In Oceania, man does not live by rationed bread alone but by every word that comes from the voice of the telescreen.

If, upon reading this, you are reminded of something you have read in the news recently, you are not mistaken. Of late, many have noticed that the language of public ‘discourse’ sounds eerily similar to that of 1984.

One of the most spectacular embodiments of Orwell’s prophetic warning occurred on 22 January 2017 on NBC’s ‘Meet the Press with Chuck Todd’ during an interview with Kellyanne Conway (https://www.youtube.com/watch?v=VSrEEDQgFc8), a counselor to the 45th President.

Much of the interview focuses on the assertion that the inaugural crowd ‘…was the largest audience to witness an inauguration, period.’ The claim was made by Sean Spicer, the current White House Press Secretary, during his first press briefing after the inauguration. While it is admittedly difficult to get a precise count on crowd size, the best metrics available simply do not support this allegation. [4] The interviewer presses the issue, attempting to confirm a fact which simply seems like common sense based upon all available evidence – that the 2017 inauguration crowd was not the largest ever. What we see in the interview, in other words, is the media and the new Administration arguing about the sum of 2 + 2.

Conway explains that Sean Spicer uttered no lie. Instead, he simply gave alternative facts about the number in attendance at the inauguration. It should come as no surprise that at the mention of ‘alternative facts,’ sales of Orwell’s 1984 jumped 9500%. [5] In fact, I could not even get my hands on a physical copy of the novel in time to write this piece. There are runs on book stores but not yet on banks. That, at least, should be encouraging.

What is discouraging is not that our politicians are lying (that is nothing new); it is the speed with which they are leading us into new frontiers of un-truth. Garry Kasparov, the Russian Chess Grandmaster, political activist and Chairman of the Human Rights Foundation recently said, ‘The point of modern propaganda isn’t only to misinform or push an agenda. It is to exhaust your critical thinking, to annihilate truth.’ [6]

Big Brother is not satisfied with causing such mental fatigue that we no longer mind contradictions. He ups the ante. Exhausting critical thinking is insufficient. Annihilating truth is insufficient. He knows that to maintain power, consciousness itself must be annihilated.[7]

The situation is dire and the last real temptation is to believe we are too late. This is captured in Radiohead’s song ‘2+2=5’: ‘It’s the devil’s way now / There is no way out / You can scream and you can shout / It is too late now / Because you’re not there / Payin’ attention.’ [8]

Like the Wizard of Oz, the one whose power is based on fear, intimidation and manipulation will always urge us to ‘pay no attention to that man behind the curtain!’ [9] But in our moment, this is precisely what we must do. We must pay attention, but I am afraid we may be surprised at what we see.

I think Pascal may be right: ‘We are treated as we want to be treated; we hate the truth and it is kept from us; we desire to be flattered and we are flattered; we like being deceived and we are deceived.’ [10]

What if, when we pull the emerald fabric of Oz aside and look at the man pulling the strings behind the curtain, what we see is none other than ourselves?

We need to ask ourselves a few questions while it is still day, for night is coming when no one can do anymore work.

First, where do we live? The answer is that we inhabit a post-truth age… and we have been here for a while. As Steve Tesich wrote 25 years ago when he coined the word ‘post-truth’:

We are rapidly becoming prototypes of a people that totalitarian monsters could only drool about in their dreams. All the dictators up to now have had to work hard at suppressing the truth. We, by our actions, are saying that this is no longer necessary…In a very fundamental way we, as a free people, have freely decided that we want to live in some post-truth world.[11]

We’ve been a bunch of frogs in a pot. Fortunately, with the announcement of ‘post-truth’ as 2016’s word of the year, Oxford Dictionary told us the water is beginning to boil. [12]

Second, who is responsible? The answer is, quite simply, we are. We have countenanced lies for so long, we now expect to be lied to without batting an eye. We have simply not held politicians on either side of the aisle accountable for lying. We, ourselves, have ushered in this post-truth era. [13] 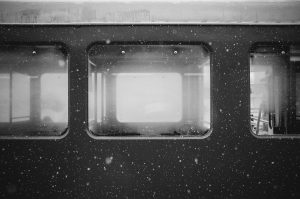 The reality is that we shrug at the truth – those of us on both the left and on the right – so long as any particular lie furthers our particular agenda. [14] We are very much responsible for our situation. We have feasted on a steady diet of whoppers fed to us by our politicians, mainstream media and the ideological opining that goes by the name ‘news’ for so long that we have turned into a nation that looks an awful lot like the newly minted President of the United States.

Third, how shall we then live? The first order of business is to start caring far more about words. A great place to start reclaiming our role as custodians of language is Marilyn McEntyre’s Caring for Words in a Culture of Lies. She writes that ‘caring for language is a moral issue.’ [15] She offers twelve simple stewardship strategies like ‘tell the truth,’ ‘don’t tolerate lies’ and ‘practice poetry.’

In particular, I want to highlight the power of poetry. In the aftermath of the 2016 presidential election, a most surprising thing happened: people turned to poetry. Richard Blanco, inaugural poet for President Obama’s second inauguration, offers one reason why: ‘Our language,’ he thinks, ‘has become watered down in sound bites and social media…a poem takes back language, reenergizes it, reinvigorates it in a way that a post doesn’t. Language, and all art, offers a kind of consolation because it speaks truth and it speaks hope.’[16]

Thus, I want to end with a poem that serves as a warning of judgment that also speaks truth and hope. It is a poem by Malcolm Guite based on the words of Jesus from Matthew 12 entitled ‘What If?’[17]

What if every word we say
Never ends or fades away,
Gathers volume gathers weigh,
Drums and dins us with dismay
Surges on some dreadful day
When we cannot get away
Whelms us till we drown?

What if not a word is lost,
What if every word we cast
Cruel, cunning, cold, accurst,
Every word we cut and paste
Echoes to us from the past
Fares and finds us first and last
Haunts and hunts us down?

What if every murmuration,
Every otiose oration
Every oath and imprecation,
Insidious insinuation,
Every blogger’s aberration,
Every Facebook fabrication
Every twittered titivation,
Unexamined asservation
Idiotic iteration,
Every facile explanation,
Drags us to the ground?

What if each polite evasion
Every word of defamation,
Insults made by implication,
Querulous prevarication,
Compromise in convocation,
Propaganda for the nation
False or flattering persuasion,
Blackmail and manipulation
Simulated desperation
Grows to such reverberation
That it shakes our own foundation,
Shakes and brings us down?

Better that some words be lost,
Better that they should not last,
Tongues of fire and violence.
O Word through whom the world is blessed,
Word in whom all words are graced,
Do not bring us to the test,
Give our clamant voices rest,
And the rest is silence.