Editor’s Note: For our first Advent reflection on Malcolm Guite’s, Waiting on the Word (Canterbury Press, 2015), Kimberley Anderson engages with John Donne’s sonnet, ‘Annunciation’. Perhaps appropriate to Guite’s own prolific career as a poet, scholar and musician, Kimberley writes her own thoughtful interaction and sets the poem to an original performance of music.

Salvation to all that will is nigh;
That All, which always is all everywhere,
Which cannot sin, and yet all sins must bear,
Which cannot die, yet cannot choose but die,
Lo! faithful Virgin, yields Himself to lie
In prison, in thy womb; and though He there
Can take no sin, nor thou give, yet He’ll wear,
Taken from thence, flesh, which death’s force may try.
Ere by the spheres time was created thou
Wast in His mind, who is thy Son, and Brother;
Whom thou conceivest, conceived; yea, thou art now
Thy Maker’s maker, and thy Father’s mother,
Thou hast light in dark, and shutt’st in little room
Immensity, cloister’d in thy dear womb.

Setting a poem to music can often provide a curious, intense way of reading and understanding it.

While still a somewhat obsessive English literature undergraduate, the period of time during which I was writing my dissertation on ‘metaphysical’ poetry coincided with my inheritance of a piano that was close at hand. The result of this fortuitous occurrence was inevitable.

John Donne was the main reason that I had decided to focus on Renaissance literature. Although I had some positive outcomes with setting to music some of the works from George Herbert’s The Temple, the writings of my favourite poet were always a puzzle to me and my basic piano skills. The poem which I did manage to set was not the most typical, either; ‘Holy Sonnet XVII’ is a comparatively gentle voicing of Donne’s characteristically tense combination of transgression and devotion.

Perhaps this difficulty can be explained with a view toward Donne’s poetic style. The term ‘stanza’ literally means ‘little room’ in Italian, an important insight that I learned from reading Malcolm Guite’s reflection on Donne’s poem ‘Annunciation’ this month. [1] Yet Donne wrote that ‘love […] makes one little room an everywhere’ in ‘The Good-Morrow’, and the same might be said of his writing.

Typically fusing concepts so remarkably disparate, often multiple times within a single poem, Donne’s technique was given its own name, discordia concors – concord in discord — by Samuel Johnson. This is particularly true of the sonnet, which is, as Guite writes, ‘one of the most compressed and concentrated of poetic forms’. 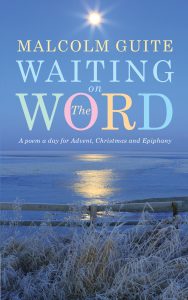 It is possible to speculate why Donne may have written poems that are so brim-full with semantic tension and mental acrobatics. The dissertation I mentioned was on the concept of ‘self-emptying’, the opposite of fullness: a concept that is arguably pathologically laden for Donne. One way to explore this idea is through the literal images of liquid, which persistently occur throughout his work. John Carey remarks that ‘the idea of melting irresistibly attracted [Donne]’; ‘the Christian’s joy is a “melting, and colliquation of the inwardest bowels of his soul”’. [1]

Thus, liquefying can be understood as an indication of plenitude, but it also carries connotations of sacrifice and pain; the lovers parting for a long time in ‘A Valediction: Forbidding Mourning’ must ‘melt, and make no noise’. The liquid motif implies, to some extent, ‘dissolution of self, an idea which critics have theorised is sometimes too ‘terrifying’ for Donne to acknowledge; in ‘Holy Sonnet III’ the speaker dwells upon the act of mourning for his sins – ‘O! might those sighs and tears return again’ – without turning, in the end, towards any genuine penitence. [2]

Penitence included, Christianity might reasonably be seen as a faith which dwells upon such notions of emptying the self, as exemplified in the central movement by Christ,

Who, being in the form of God, thought it not robbery to be equal with God:
But made himself of no reputation, and took upon him the form of a servant, and was made the likeness of men:
And being found in fashion as a man, he humbled himself, and became obedient unto death, even the death of the cross. [3]

However, for many of the metaphysical poets, the paradox of the Incarnation offers a picture of fullness, pleroma, which may be even more important than the kenosis described above. Mainly, this fullness stems from an awareness of the ultimate victory of Christ over death and humiliation; even without directly evoking this victory, though, it can be understood that, by taking on human form, Christ sacralises humanity, expanding it to a greater capacity.

Such a sense of fullness arguably dominates in ‘Annunciation’, even in the lines that describe Christ exchanging His omnipotence for human vulnerability. From the outset Christ is described as ‘That All, which always is all everywhere’. But, instead of describing any reduction of Christ’s person in the Incarnation the poem depicts the process as an adoption of human predicates, which are existentially significant even if they are traditionally seen as negative: the Son of God ‘cannot sin’, ‘cannot die’, and ‘can take no sin’, yet (this word is repeated in all three lines) Christ ‘all sins must bear’; ‘cannot choose but die’, and will ‘wear [… mortal/sinful] flesh’, ‘taken’ from his mother’s womb. By Christ’s incarnation, it could be argued, even the darkest of human processes are expanded to include the divine.

The paradoxes in the sonnet’s later sestet, addressing the Virgin Mary, arguably make this point even more starkly. Introducing this section, the perspective zooms out dramatically, stating that Christ existed ‘Ere by the spheres time was created’, though it is also emphasised that ‘thou [the Virgin]/ Wast in his mind’ even then. ‘[N]ow’, however, it is suggested, in a feat in conceptual acrobatics, that Christ is ‘thy Son, and brother’, and ‘thou art now/Thy Maker’s maker, and thy Father’s mother’. Perhaps there is an archness to these lines, bearing in mind the scandalous implications of conjoining these filial terms in any other context.

Setting the poem to music, I wanted to reflect Donne’s Discordia concors by cramming the piece with as much chromaticism, and as many surprising cadences and dramatic moments as I could, without losing a sense of balance completely.

The final product reflects the truth that I still have a very limited capacity for writing intricate harmony, though the piece is comparatively more complex than my previous settings of Donne’s work.

Nevertheless, simply singing these phrases and trying to find appropriate chords did stimulate thought, highlighting interesting dynamics to the poem that I might not have discovered otherwise. For instance, it became very evident that the climax of the sonnet lay in the paradoxical statements about Mary’s relationship to Christ, and the transformation of identity thereby. The recording is not in the least polished, or even well sung, but the high pitch of the melody at this point also made me think anew of Mary’s smallness in the face of these formidable divine forces. 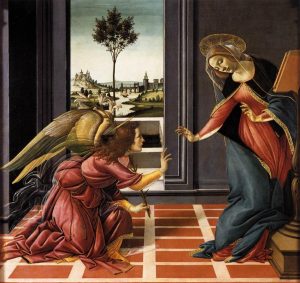 A further revelation that I gained from setting the poem to music was regarding how the final two lines of the poem are rather like a ‘coming down’ after this climax, as Christ is described in the new context of an infant in the womb. Now, he is ‘light’ but this light is enclosed in ‘dark’. Similarly, the idea of Christ’s ‘Immensity’ is acknowledged, rather soberly, at the end of the poem as being something that Mary ‘shutt’st in little room’.

Guite turns again to the idea of the poem here, the stanza being the ‘little room’ which may contain Christ: a potentially inspiring thought. Yet in my experience it was difficult to sing the word ‘shutt’st’ in a way which did not sound somehow negative: either aggressive, or lamenting. The word evokes an act of dominance, even punishment, towards a child – one confined to a ‘little room’ that is patently not, at least in one very important sense, an ‘everywhere’.

Perhaps here–after the rest of the poem dwells upon the positivity and pleroma of the Incarnation–such a thought might indicate the kenotic side of this activity, even though it is only slipped in (or hidden) as an afterthought. Just one possible interpretation of a cunningly multivalent phrase.