EDITOR’S NOTE:  Leading up to the IN/BREAK exhibition in March, Transpositions will be publishing a series of reflections written by artists who will be contributing works for the exhibition. The series begins with an irreverent, candid reflection by author and poet Alicia Pollard, as she searches for a starting point amidst familiar and new sources of inspiration, inviting us into the mind of a writer poised to put pen to paper.

Transept’s spring exhibition theme was set: In/break, with its physical meaning of a breaking in, incursion, or invasion, as well as the theological undertones of God’s breaking into human history in revelation and redemption. I loved it. Then, I realised that I needed to come up with my own contribution. Oh dear…

Artistic inspiration, brainstorming, and making are mysteries; the process dwells somewhere between work and wonder. My British Literature professor told us about the great debate of creative work: is it all inspiration (ideas coming to you, given without your effort) or perspiration (your own labor)? C S Lewis said that the Narnia books came to him through ‘images’ including ‘a faun carrying an umbrella’, which he developed into the ‘Form’ of a fairy tale’.[1] 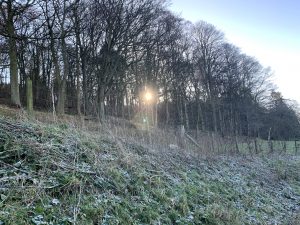 When asked about the origin of some of the names he invented for Middle Earth, Tolkien spoke of a ‘leaf-mould’ in the mind of ‘memories (submerged) of names’ that ‘rise up to the surface at times’ and provided the bases of his ‘invented names’.[2] Diana Wynne Jones claimed that she created her book Fire and Hemlock  by interweaving various myths, including the ballad ‘Tam Lin’ and ‘Thomas the Rhymer’, The Odyssey, and Cupid and Psyche, with an ‘organizing overlay’ of T S Eliot’s Four Quartets, in 1988.[3] However, she confessed in 2002 that that interweaving of allusions was more a work of the editing process.[4] The actual writing of the first draft was in ‘a white heat’, a state where she ‘was unable to put it down’. A thousand other artists have tried to explain the process of Making using analogy, metaphor, or even by just admitting: I don’t know.

As a new college graduate, I started my creative writing career by following Pinterest pins and blog posts with rules and guidelines: ‘10 Ways to Make Believable Characters’; ‘5 Tropes to Avoid’. I found that this kind of formulaic advice left me staring at blank Word documents, trying to think up plots and characters that followed these rules. Later, I took a writing course with Jonathan Rogers, in which he taught creative writing principles through the works of Flannery O’Connor. His teaching emphasised focusing on the concrete, physical world and finding spiritual meaning in it, instead of trying to create meaning by presenting abstract concepts on their own. I found this way of writing easier, art more than science: pay attention to the physical world, describe it in its concrete, specific beauty…and your story, poem or essay comes to life, like crocuses breaking through the earth and opening in white and purple splendour.

Concrete details. Yes. That has worked for me in the past. I try to do things that have helped me before: I hike through the fields, the mud churning under my feet, the metal gate swinging open at my touch like a living thing. 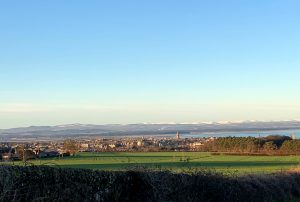 I watch the golden winter sunlight paint the green plough furrows, the prickly hedges, and the dusting of snow on the farthest hills. I make triple-chocolate scones and black coffee; I listen to the North Sea’s gentle murmur; I walk with a friend and let a chilly gale turn my cheeks pink.

Concrete details are not enough for me, though. I like to work with ideas, too, and to start with big questions. One of my short stories began while reflecting on a popular call in faith-and-art circles to ‘re-enchant the world’ or use art to reawaken a cultural sense of mystery and wonder. I began my world-building by asking, ‘what if the world was re-enchanted, and it was a bad thing?’ Another tale started because I wanted to submit a science-fiction story to a journal and, having very little scientific knowledge, resorted to interviewing my dad to get the sciency information to begin with: space/the ocean as a great unknown and eigenvectors as a way of tracking contagious diseases. Starting with a big idea on its own can be difficult, however. If you try to write a ‘story’ that is really a poorly-dressed sermon or persuasive essay (given away by its shallow characters, bland settings, a too-neat plot) it turns didactic, and people hate didactic literature.

Big ideas related to In/break…hmm. I ponder synonyms and images: breakthrough, invasion, incursion, irruption, shattering, turning, splitting, cleaving, cracking…but no dream-images come to mind, none of those essential fragments of dialogue or whispers of atmosphere that I need to start.

So, I cheat (sort of). I use a trick I invented this past autumn for a creative collaboration project: I reach out to a few artist-friends and ask them to give me a few concrete objects to work with. I call these ‘artefacts’, though they’re more like creative stimuli: something sensory (accessible through the five senses) that I can use to weave into something…literary. (My heart says ‘short story’, but structured poetry is a healthy discipline for me, and I haven’t written an essay in a while.)

My artist-friends rise to the challenge magnificently. One friend gives me a splash of light on a wall, floor, or ceiling, framed by a window opening (flashlight, sunlight, lantern-light, the light on the front of a ship, etc.) and a musty smell like mold. The other gives me a sudden smile, unexpected and beautiful and fat fuzzy buds on a deciduous magnolia, with the pink blossom pressing against the seams, so you see just a line of pink.

Mmm…I can feel my muse stirring, if not completely awakening. Light on a window…I remember, years ago, noticing how headlights flash around a room, creating an odd play of shadows, when a car drives by. A musty smell…I envision libraries with foot-flattened gray carpets, a warehouse full of wooden crates, the crypt of a church. I hear a character say something interesting…

I have no idea what the final piece will look like: something fun to read, I hope, whatever medium and shape it takes.

But I have a beginning.

[1] C S Lewis, “Sometimes Fairy Stories May Say Best What’s To Be Said” in On Stories: And Other Essays on Literature (New York: HarperCollins Publishers, 1982), 67-73.

[3] Diana Wynna Jones, “The Heroic Ideal in Children’s Books: Legacy and Promise’ in Reflections: On the Magic of Writing (New York: Greenwillow Books, 2012).

[4] Diana Wynna Jones, “Some Truths About Writing’ in Reflections: On the Magic of Writing (New York: Greenwillow Books, 2012).