In the first of a series leading up to the Transept event space(  )between in Holy Week, we offer some of the artists’ reflections on their own works in progress. In the first reflection, Letizia Morley describes the way in which she is using the imagery of Celtic knots and the art of calligraphy to frame and explore empty spaces. In the second, ITIA’s artist-in-residence, Dan Drage, asks how a visual artist can engage with emptiness and remarks on his use of lines to draw our attention to empty spaces.

Letizia Morley is a visual artist based in St Andrews. She employs a Realist style using a variety of mediums including oils, watercolours, calligraphy, and comics. For examples of her work, please visit www.letiziamorley.com.

For the theme space(   )between I have created two medieval-style pieces. One is a three-coloured Celtic knot and the other is an illuminated calligraphy piece of Psalm 139:7-10. Before beginning nearly any project, I spend a long time researching reference photos online, scrolling through hundreds of images to find exactly what appeals to me. Drawing Celtic knots is a calming and meditative process that involves a lot of patience and a certain emptying of the mind. 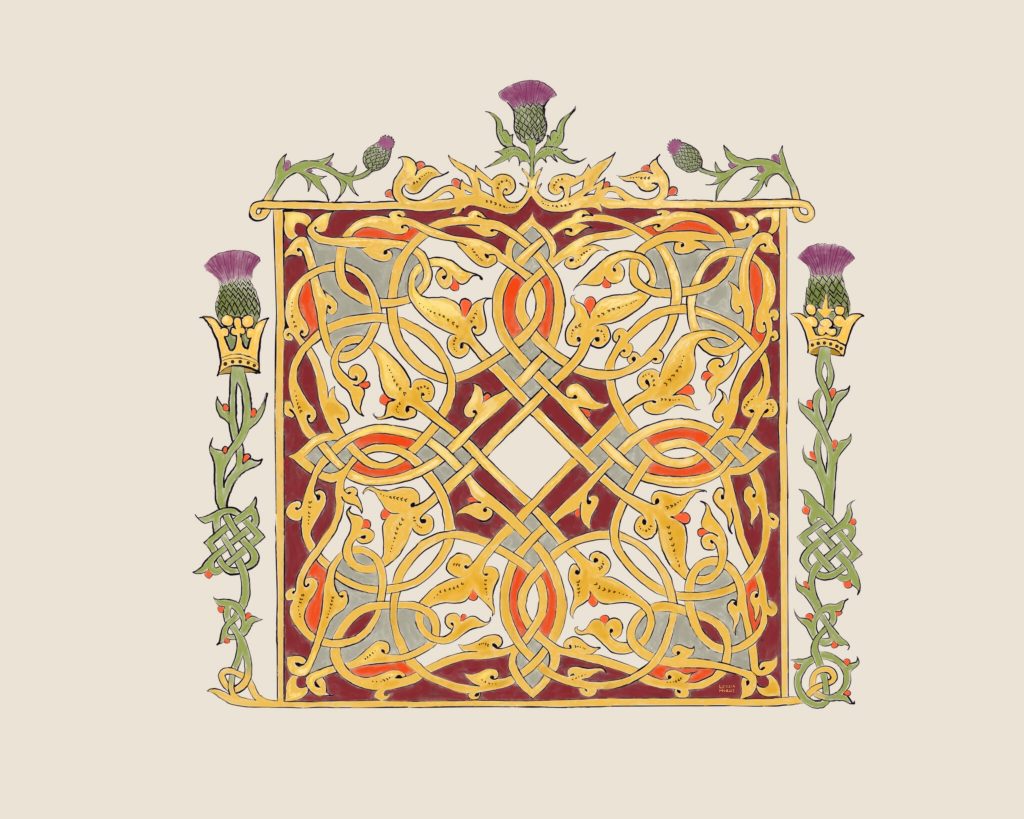 I draw them free-hand without a grid, though I do use a ruler. This method gives the knots an irregular and therefore more human touch. Every line goes ‘over-under-over-under’ every other line it comes across so that the ‘space between’ the lines is very important to the overall composition. What also makes the interweaving image interesting is the shape and size of the negative (empty) space between the loops and lines. Once I found a suitable reference for my current piece, I used the Procreate App and an Apple Pencil on my iPad Pro to draw and colour the knot digitally.

For my illuminated calligraphy, I used Japanese sumi ink in a square-tipped metal nib dip pen for the writing, and Winsor & Newton watercolour paint on Aquarelle Arches Hot Pressed 100% cotton rag watercolour paper. I decided on a portion of Psalm 139 that describes an immense space between height & depth and east & west. The passage also mentions Sheol, which is apt as Holy Saturday is part of the show’s theme. Next it was time to choose a script. I chose Uncial because that’s what I have been practising the most lately. 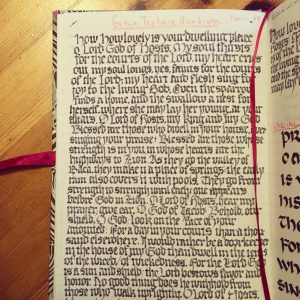 Practising and arranging the layout of a script are the most time-consuming part of the process for me. Uncial was in use between the third and eighth centuries, most famously in monasteries in the British Isles. I usually try to match a script with borders characteristic of its general time period, but in this case I included elements of fifteenth-century Italian manuscripts in addition to the Celtic knots that usually accompany Uncial. The text was written first, then I sketched out everything in the border with pencil, and then I retraced all the lines with my favourite Sakura Pigma Micron pen. The intensely ornate border presses into and thoroughly encompasses the text to depict the way God’s presence encompasses the psalmist. Each side of the page is painted with a colour that represents the four directions mentioned in the psalm: pink-red for the morning (Homer’s ‘rosy-fingered dawn’), orange-red sunset shade for the west, transparent light blue for the heavens, and a murky midnight shade to represent Sheol at the bottom of the page, where there are also overlapping flame-like shapes. Thick intertwining vines with ivy-like leaves in alternating blue and red complete the composition. My colour scheme is limited to shades of red and blue in order to give a cohesive feel to the disparate elements. Red and blue are also, of course, very symbolic in religious paintings across the centuries. Finally, I filled in all the vines and Celtic knots with Liquitex gold acrylic ink made with flecks of mica. 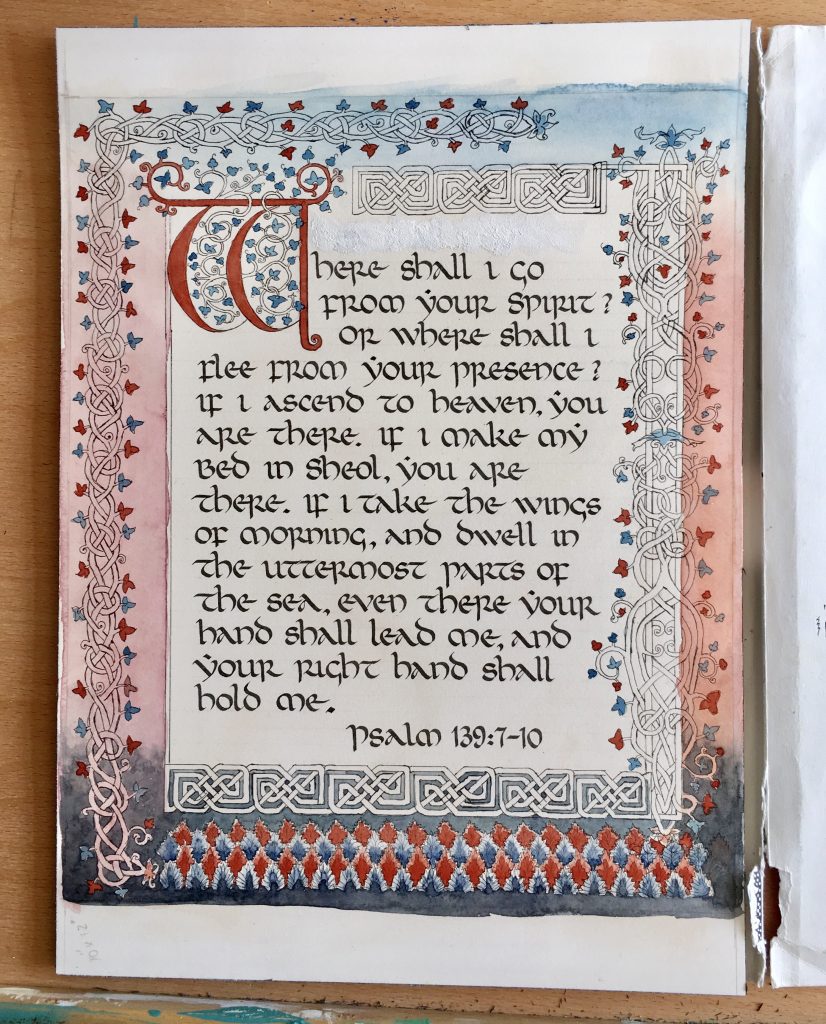 In progress: painting the border 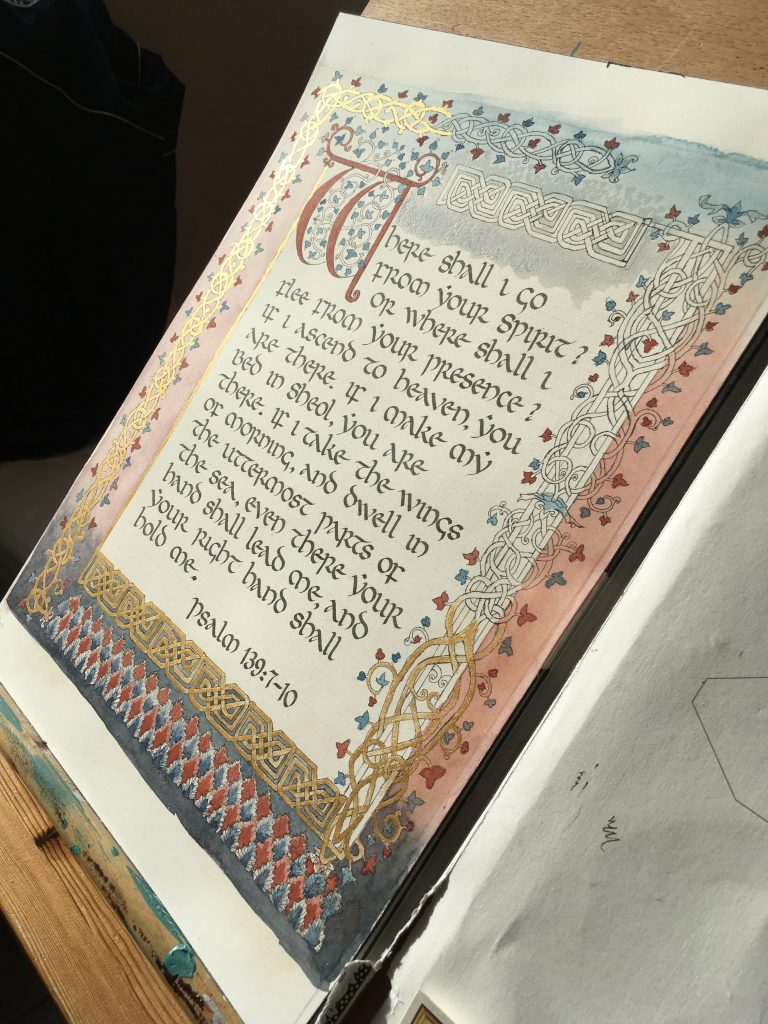 A visual artist, Dan is the current artist-in-residence for ITIA. After more than a decade living and working in Vietnam, Dan finished the ITIA MLitt with a focus on the theological value of negative space in contemporary sculpture. His current art projects continue to explore themes of negative space, absence, and the human touch on the built environment in and around St Andrews.

This year’s Transept show is anchored by the silence of Holy Saturday, that all-too-often unnoticed day between the horror of Good Friday and the joy of Easter Sunday. In preparing our show, space(   )between, we have explored themes resonant with Holy Saturday, including Sabbath, the seventh day of creation, silence, emptiness, the harrowing of hell, and the biblical narratives surrounding this day within the Triduum. Very little is recorded in the biblical canon about that particular Saturday, which leaves an important gap, almost a holding of breath, between the two giant days by which it is surrounded. Yet we cannot get to Sunday from Friday except by first going through Saturday.

How does a visual artist engage with emptiness? How might the artist incorporate—theoretically and practically—nothingness and silence into a piece of art? Might there be something in the emptiness, so to speak, for us to notice? This question challenged my 2018 master’s dissertation for ITIA (with the subtitle, The theological tension of materiality and immateriality examined through the negative spaces of contemporary sculpture), and it has inspired many of my art pieces for this show. 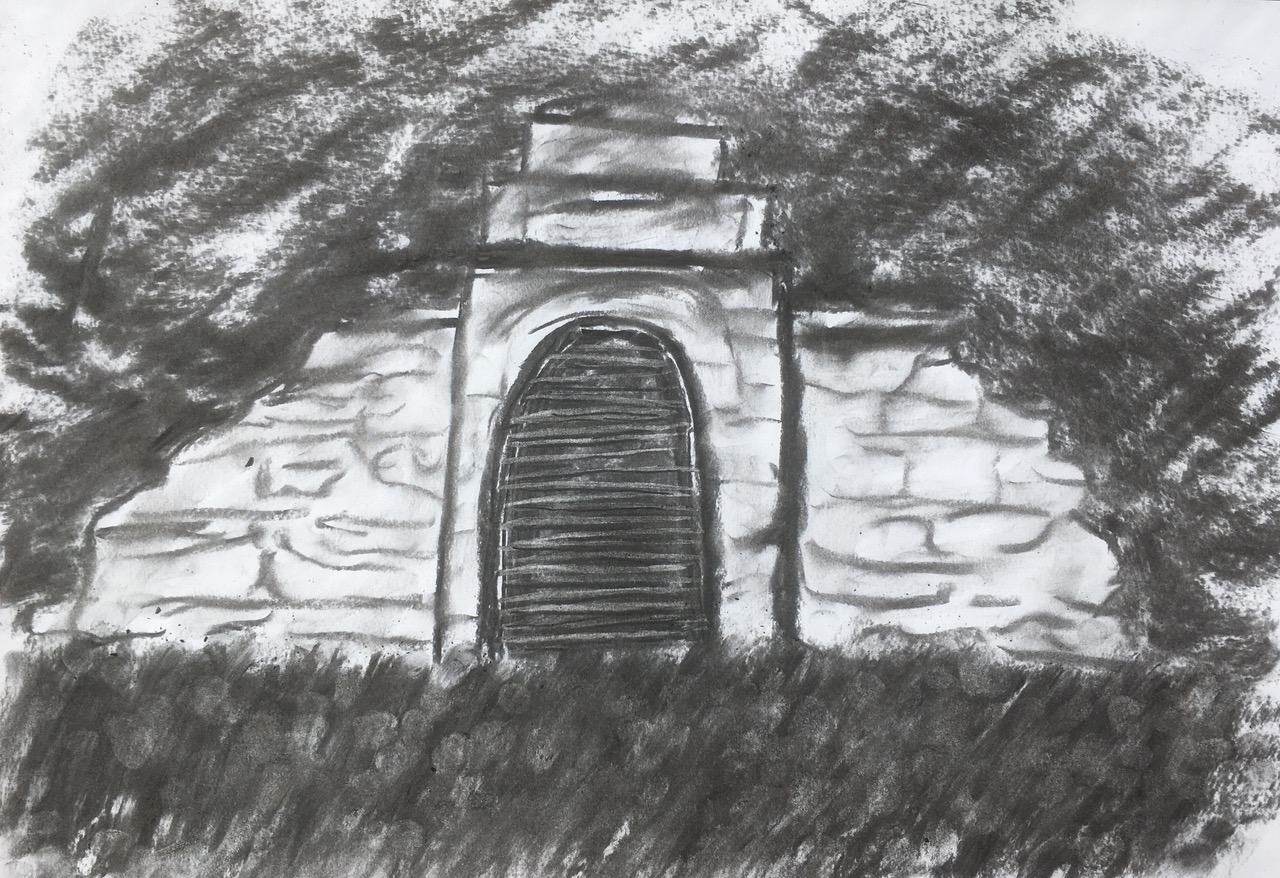 My current work is dominated by lines. As I cannot seem to escape them, I allow myself the indulgence of their inspiration. A collection of parallel lines, for me, provides ample material for engaging our show’s theme of liminality, emptiness, silence, threshold… Phenomenologically, lines connect but also delineate between. When arranged together, lines become a porous kind of boundary: not solid, but also not empty. They are empirically there, but they just as much elicit awareness of the negative spaces between them:

Along with several smaller pieces for the show, I’m grateful to have been approved to install lines throughout St Mary’s Quad created using white cotton twine. I intend to use these lines to fill four areas: the empty niches above the main gate, under the canopy of the large Holm Oak, around the sundial, and within the gate ruin. A fifth piece will be installed briefly in the main gateway itself, wherein a white cotton canvas pinned to the cobblestones will collect the footprints of passersby on the morning of Palm Sunday. The canvas of footprints will then be on display throughout the remainder of the exhibition. 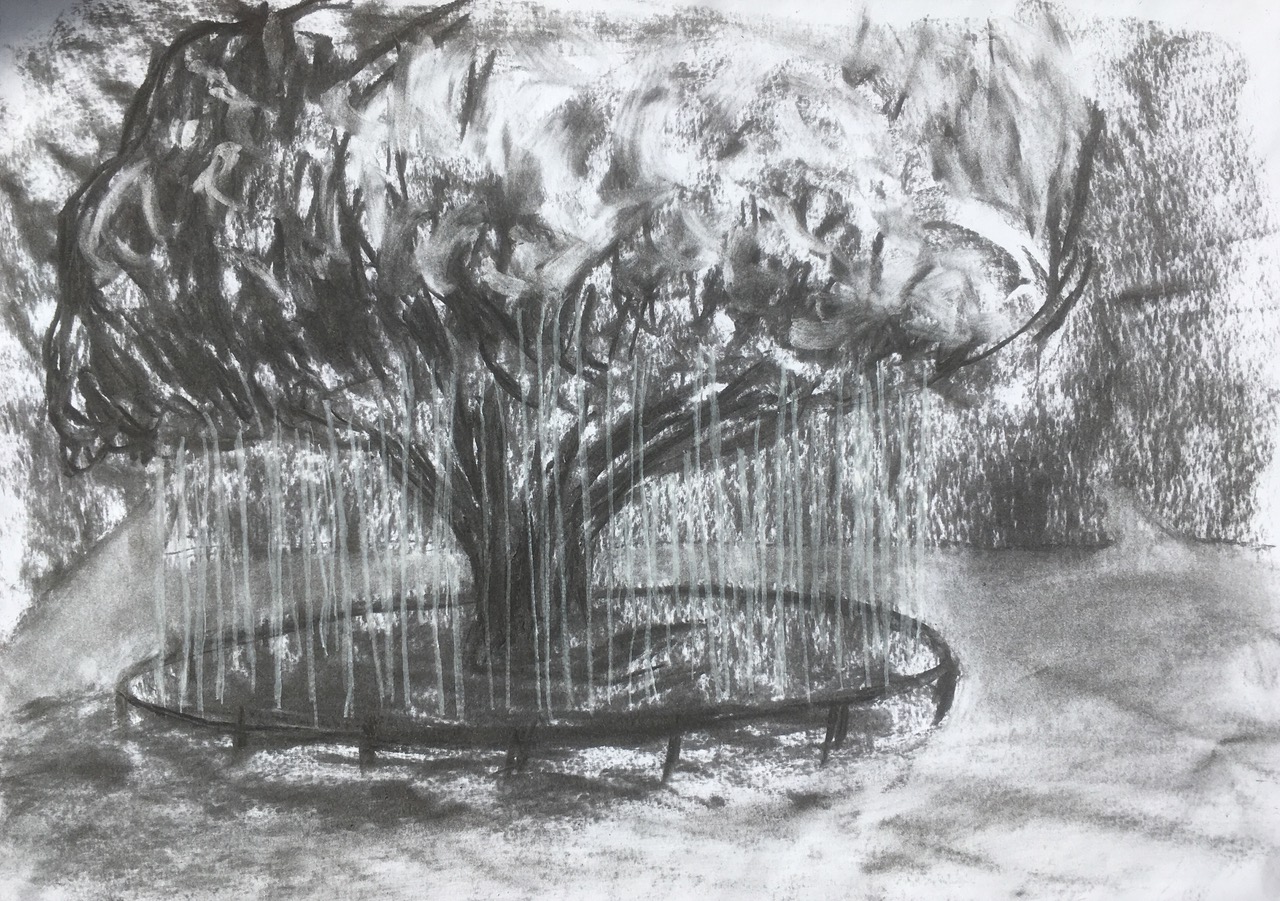 At its best, my work elicits more meaning than I initially connect with it. Yet by providing some thoughts on possible meanings, I hope this piece might help viewers begin to interpret the works for themselves. Perhaps most obviously, the gateway itself is a threshold, a space between. Within, footprints of people crossing the threshold, both literally and figuratively, will demonstrate movement, journey, passage, the importance of the in-between spaces. Empty niches are found throughout St Andrews: a vestige of the religious life of the town, of forgotten statues of saints which once stood therein. The strings filling these three particular niches will highlight their emptiness, evoking the fact that these statues are no longer a part of the daily faith of the town— instead, only gaps remain, perhaps eliciting thoughts of the empty tomb or a sanctifying of the rest of life, the saints—like seeds—having dispersed. String under the oak might frame/highlight? the ‘space between’ the tree and the earth, between life and death, or death and resurrection. Further into the quad, the ancient sundial will be wrapped in string. As the guards were set at the tomb of Christ, these strings try in vain to guard against the passage of time, as if by blocking the movement of the clock the days cannot move from Friday to Saturday to Sunday. Finally, anticipating the resurrection, the coming-through-the-threshold from death to life, string within the gate ruin on the south end of the quad also serves to mock the foolishness of setting a guard at the tomb – another attempt to hold back the inevitable. Holy Saturday is the string between Good Friday and Easter. Those two monumental days never touch, never meet; instead, there is ever a thin, silent presence separating and uniting them.