‘Hey Teo—play some of that back’, jazz trumpeter Miles Davis comments on the delicate tune ‘Thisness’. [1] A previously unreleased track until its inclusion in a ’90s compilation, ‘Thisness’ is spacious, mellow, and stop-and-go; Davis’s lines use the space of the song to anticipate and sit within pianist Hancock’s structures, or in the gentle explorations of drummer Tony Williams and bassist Ron Carter. It’s typical for this moment in Davis’s second great quintet (for example, ‘Vonetta’ from Sorcerer, and even sparser still, Filles de Kilimanjaro): freer structures, with greater space and reflection. The playing is beautiful, close, balanced on the edge between contemplation and desire. 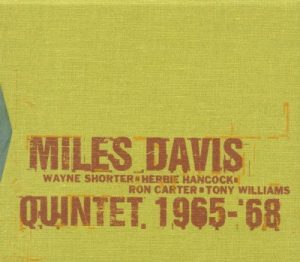 The real shock lies outside the track itself in Teo Macero’s response to Davis: ‘OK—your sandwiches are right here’. Drawn into ‘Thisness’, we hold our breath from one chord to another, caught entirely in the band’s dynamics. And yet, at the reminder of something like sandwiches, there’s a feeling of frustration. Why not just cut Macero’s line? Let Davis have the last word: play the song back over and again. Or, maybe we’re led to think that the whole song was a time-waster before lunch; were they just bored and hungry? More likely, the mere mention of sandwiches may grate against our engagement with the music. How often have we heard of music ‘as its own world’, or jazz in particular as a means of rearticulating the world ‘not as it is, but as it can be’. Surely something as banal as sandwiches have never quite figured their way into that world. Instead, we’re usually considering abstractions like freedom, hope, and love—typically intangible concepts which require the intangible experience of music to be reached properly. What then of sandwiches? Is this the harsh come-down from some ethereal realm where music lives?

If nothing else, Macero’s line is a jolting reminder of the band’s humanity. Which is to say, it’s only the listeners who would prefer not to hear about the sandwiches. But more broadly, Teo’s comment functions as a reminder of the personhood behind all music, and offers a strong counter to the immateriality of music as such—all music’s ‘thisness’, so to speak. No music exists without the musicians to play it, and all music is material insofar as it requires some materiality (like a trumpet, or at least a computer) to be played. [2] Or, consider the sandwich (again). Something like taste—a sense within a sense—emerges only by and through material things. There is no taste of bread without bread. [3] Likewise, concerning music there is always the ‘thisness’ to music itself. We are prone to consider music a particularly ethereal art because it is in a certain sense unidentifiable, meaning invisible. [4] A note can hang in the air almost eternally. [5] But it is always the trumpet (and the person playing the trumpet) which tossed the note into the air. In such a case, ‘thisness’ demonstrates music’s tethered-ness to the materiality of all instruments, the groundedness out of which emerges suspended notes, or the interplay between piano, bass, drums, and a horn. Even the timbre counts in the note.

However, thisness is also a great hope—the materiality of music, and its proximity to a sandwich. To the nonchalance of the gestures within ‘Thisness’, perhaps there’s a great encouragement to the practice of music in a moment of daily boredom. That is, instead of dematerializing (or disembodying) music, we have a clue to the thisness of all existing things, their senses and materiality. In each ‘this’, there is a fleshiness and a beauty intertwined, which is again to say that there is no other way to beauty than by what we are and what we have. Beauty, too, or expression, is grounded forever first by even its thisness, such that neither does it exist apart from the structures which produce it and as such cannot be disjoined from a trumpet, piano, or sandwich. More clearly, ‘we all know that absolute beauty is not a beauty existing who knows where, out of reach, which no one could attain, represent, or embody. Rather, it’s something that shows itself as one particular beauty, and then as another, and another again’. [6]

The hope for materiality (and what ‘Thisness’ may say to the Incarnation) is that the world even in its nonchalance is quite a wonderful thing, capable of passing the time in wonderful ways. And to say that thisness always matters is to affirm the potential of material things to exceed themselves. Additionally, I consider Davis’s unissued song quite a moving success and a powerful text for theology. Thinking eucharistically, mediation is not a roadblock but the means for something otherwise untasted, unseen to be present—the taste of bread, or the hope of a sip of wine. Concerning the Incarnation, our reading of ‘Thisness’ gets to the very core of the matter: Christ dwells as a human. Which is to say, to find Christ in his particular flesh is not to wish for Christ despite his body—as if it got in the way—rather, it is to find Christ because of his body. [7] Here, the mode reveals the thing, or some instantiation of the thing (Nancy). To say otherwise would be to ask what Davis’s music sounded like without his trumpet, or to look for a world of music apart from the world of a sandwich, that is, nowhere.

[2] The broader correlative concerns the abstractions I mentioned earlier—freedom, hope, love. None of these are disembodied aspirations. That is, within a particular context of jazz, often there is a very particular freedom being articulated, namely, black bodies seeking inhabitable freedom from racial oppression through the right to vote, just prison systems, or economic equality. ‘Thisness’ was recorded in the late ’60s, which saw the Civil Rights Bill passed but also the deaths of Martin Luther King Jr. and Malcom X.

[3] Synthetic tastes complicate this a bit, but not much. Even if it isn’t bread one eats when one tastes the flavor of bread, one still eats something.

[4] This seems to be a particularly intensified result of the rise of digital music, even as early as the gramophone, or now any device which can produce music without a musician present.