Mitchell Holland’s exciting article on Theatrical Theology explains how Jesus Christ Superstar and Godspell can be experienced as “acts of worship”.

Andrew Noah, whilst exploring Theatrical Theology, states: “Christianity, through the use of liturgical drama, mystery plays, morality plays, and plays performed within Christian schools, has had a long history of using theatre as a means of expressing truth”.[1] Richard Hasnip, Course Director of Applied Theology & Performing arts at Regents Theological College, draws similar comparisons when talking of the similarities between church and theatre in his book, The Mystery and the Passion: Creating Holy Theatre.[2] This use of theatre in our acts of worship draws those attending into the narrative of worship and adoration, of community and embodiedness, so that they are no longer simply attending but experiencing and, thus, fully entering the story of God and his people.[3] Noah suggests further that liturgy—that framework on which our whole life worship hangs—is itself a theatrical event because it calls the community of God’s people together to actively worship and contemplate God’s role within the history of revelation”.[4]

This drawing in is demonstrated in the works of musical theatre. There is a close relationship between the two-differing liturgies of worship and musical theatre—in the need for climax, peaks and the use of sung elements as expression that words alone cannot commit. “We speak because an idea occurs to us and we feel the need to communicate it”, writes David Craig, “We sing because the idea is more important, more urgent, more needful of the language of music to make itself understood. Music gives speech a greater dynamic”.[5] I find this notion similar to our repentance liturgy during Advent and Lent, or during the Eucharistic Prayer, where sung interjections heighten engagement. So, then, how does a liturgical sense of climax, peak, and expression play out in the reality of works based on explicit depictions of God? For that, we need look no further than Jesus Christ Superstar[6] and Godspell[7]. These two musicals are particularly rich with the story of God, as told through Christian tradition.

Scott Millar notes, after Tim Rice reportedly told an interviewer that he did not believe Jesus was the Son of God, that Jesus Christ Superstar (JCS) is a work of fiction, a “version of how it might have been”, but that this “for him…made the story all the more amazing”. Scott Millar goes on to suggest that “The issue of religion is all but absent from the show, a conscious choice on the part of its creators, and a contentious one”.[8] Jesus, in JCS, is commonly played as aloof and sulky, sometimes leaving observers with many more questions about the place of God in contemporary society, and sometimes re-enforcing personal narratives about God or Jesus (for this a watch of both the 1973 and 2000 films are useful watching).

This is necessary for the work of JCS; the musical is not intended to convert or retell a biased narrative from the Bible; rather, there is an intention for observers to watch and make up their own minds. The sense of spectacle here adds to that building of narrative. The portrayal (and indeed casting) of the role of Herod has regularly allowed for a comedic playing of this role. In 1973, it becomes a (deliberately) very bad faux tap role during “Herod’s Song”, with rage being regularly overplayed by characters such as Rik Mayall in the 2000 version, or characters playing mainly for humour, as in Chris Moyles in the UK Tour from 2012, or the Simon Zealotes number and routine, which is the first fully unison choreographed number, from the 1973 film, which uses contemporary movement and costumes that are reminiscent of production of Hair in the late 1960’s. This adds to the sense of theatre. It could be argued that this brings the sense of narrative closer to us in the contemporary context.

This is one of the main objectives of JCS, as is seen in language in a song such as “Superstar”, (coincidentally a word which was gaining traction when talking about rock stars of the later 1960’s) that Rice saw emerging out of the musical culture they were writing into. One of the other elements that emerges out of JCS is that, while it has run for longer than many other “religious” musicals, is was not, in itself, created as liturgy. It has been used as liturgy (and developed in small ways, like adding a bright light at the end to hint at the resurrection) for Holy Week or Easter Day (I can think of one local-ish Methodist Church where, until recently, it was still performed with regularity). Its sense of spectacle adds to that drama and intrigue around Holy Week and how this man, who is also God, ends up being crucified. The humour and the contemporary contextualisation of the Gospel narrative, and the re-imagining of it with Judas as main character, refocuses any thoughts we might have regarding our own understanding of the narrative. Its focus on Judas, Herod, Caiaphas & Pilate, who are all allowed limited voices in the original narrative, and its gruesome depiction of the crucifixion, and the lashings that lead up to it, help to place us in that story. In that sense whilst it was not intended as a liturgical creation, it functions as one, bringing us closer to the narrative. Whilst it does not seem to satisfy a Christian narrative that allows for hope, for growth, or for unity, this was something that was being written into another piece being written about Jesus in the early 1970’s.

Whilst JCS is set in the timeframe of less than a week, documenting the march into Jerusalem until the crucifixion, Godspell takes a longer view of the narrative, exploring more of Jesus” teaching and life, using the Gospel according to Matthew as its main source. It might be said that Tebleck and Schwartz have created a modern mystery play, using humour, community, reverence, and irreverence. For all of these elements, you need look no further than the use of clowns in this work. But, in Schwarz’s own words, the musical displays, “a group of disparate people slowly becom[ing] a community built around one charismatic individual, who then leaves them and they have to carry on as a community without him”. [9] It seems that there is less of an interrogation of Christ as divine—that doesn’t seem to be the point. The point is that there is a community of people who have gathered and become one in their beliefs and objectives. The image of God, through Jesus, is not one of distance, but one of relationship. Each person who encounters this Christ is changed by Him. Is this not one of the points that the gospels raise – that once we have encountered Christ we are changed, not once, but upon every encounter, we become more Christ-like? This transformation, as demonstrated through the “clowning up” of the cast, gives light to this consistent revolution that takes place in each of us. 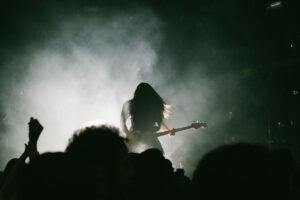 In the show itself we see, after the song “Day by Day”, the portrayal of Matthew 5:38-39, where Jesus is transforming teaching from Leviticus into the new context of Jesus’ time. Similarly in the song, “Alas For You”, Jesus rejects the Pharisees and the interpreters of the law, claiming that they are hypocritical, calling them “Snakes”, “Viper’s brood”, and “Blind fools”, publicly teaching and revealing the new way Jesus is working. This “clowning” is not about being a joke, or being separate from society, but about standing out within society, transforming and revealing truth within it. This concept, introduced by Tebelak, is inspired by the work of Harvey Cox, The Feast of Fools, and this revisualising of the story of Jesus is primarily concerned with drawing people into this narrative and allowing them to adopt it. As Scott Miller points out “Those of us who are familiar with Christianity know that we should be moved [by the passion narrative], but we aren’t. For the show to succeed, the audience must be converted along with the cast”.[10] It is this sense of drawing people into a narrative, of allowing people to adopt it as their own, that I see so regularly in the liturgies offered in the churches I attend. It is that sense of community, that sense of togetherness and wanting to draw together that seem to be important and are well communicated.

Both of these shows, in their own ways, are acts of worship, not to be viewed, but to be experienced.

The community that JCS and Godspell create are incarnational or, in Scott Millar’s words, are “literally a religious experience”. [11] People I have spoken to have admitted to the profound effect these musicals have had on their lives and their relationship with God. This sense of community and the thoughts of this existence only happen in relationship with one another, and this idea is integral to both shows and their narratives. In this sense, both of these shows, in their own ways, are acts of worship, not to be viewed, but to be experienced. We are invited into this worship. We are invited in. This sense of community is fundamentally part of the trinitarian doctrine into which we are invited. This divine dance, as Richard Rohr phrases, is that into which we are invited, and Musical Theatre is another creative device on our journey.[12]

[8] Scott Miller, From Assassins to West Side Story: The Director’s Guide to Musical Theatre (Heinemann Drama, 1996), 127.

[12] Richard Rohr and Mike Morrell, The Divine Dance: The Trinity and Your Transformation (Whitaker House, 2016).