[EDITOR’S NOTE: As our series on The Art of Advent: A Painting a Day from Advent to Epiphany by Jane Williams concludes for Christmas, Kevin Antlitz reflects on the miracle of Emmanuel as portrayed in James He Qi’s painting Nativity, and on Qi’s inspiration from Raphael. For more information on this series, see our Series Launch.]

O Emmanuel, our king and our lawgiver,
the hope of the nations and their Saviour:
Come and save us, O Lord our God.

With O Emmanuel, we finally come to the last of the seven O Antiphons. As we wrap up this series, it may be helpful to further consider the antiphons as they have traditionally been used in Christian worship. Liturgically, these rich refrains have been recited or sung at evening prayer during the final seven days of Advent (December 17 – 23). Although we are not sure exactly when or by whom these antiphons were penned, we do know they have been guiding the Church in her prayers and forming her desires since the eighth century and perhaps even earlier.

In some traditions, including the Roman and Anglican, the antiphons are sung during Vespers on either side of the Magnificat (Luke 1:46-55), thus giving them the name the Magnificat Antiphons. [1] Situating the antiphons in their liturgical context – especially in relation to the Song of Mary – provides especially fertile ground as we listen in on the dialogue between O Emmanuel and the painting Nativity by He Qi [pronounced huh chee].

Before attending to the subject and style of Qi’s painting, it may be instructive to learn a bit about the artist himself. He Qi was born in mainland China and was a teenager during the Cultural Revolution. In the early 1970s, as part of Chairman Mao’s ‘Down to the Countryside Movement’ in which urban youth were farmed out to rural areas, Qi was forced to perform manual labor. He managed to get out of this work by demonstrating a knack for painting. In those years, portraits of Mao were in high demand and so he spent days reproducing portraits of the Chairman. During this time, Qi happened to discover a picture of Raphael’s painting Madonna and Child in an old art magazine. He was so moved by the peacefulness and tenderness of the mother with her child that he would paint portraits of Mao by day and of the Madonna and her child by night. Many years later, in large part because of his encounter with Raphael’s painting, Qi became a Christian, studied medieval art at the Hamburg Art Institute in Germany, and earned a doctorate in religious art from the Nanjing Art Institute in China. All of this will, I hope, illuminate our understanding of the seventh antiphon and Qi’s painting of the nativity scene which Jane Williams chose to accompany it.

Keeping the antiphon in the foreground, I will now offer some observations, first of the painting’s subject and then its style. My aim here is not to be exhaustive but to help guide your own vision and reflection as you read this painting in light of the antiphon.

The subject of the painting is the scene of Jesus’s birth as described in Luke 2:1-20, collapsed into one canvas. There is perhaps no better scene than the nativity that embodies the miracle of Emmanuel, ‘God with us’. [2] We’ll reflect on several of the characters in the painting, starting with the angel at the top and work our way in a clockwise spiral ending with the focal point of the painting: Mary the Theotokos and Jesus, her son. 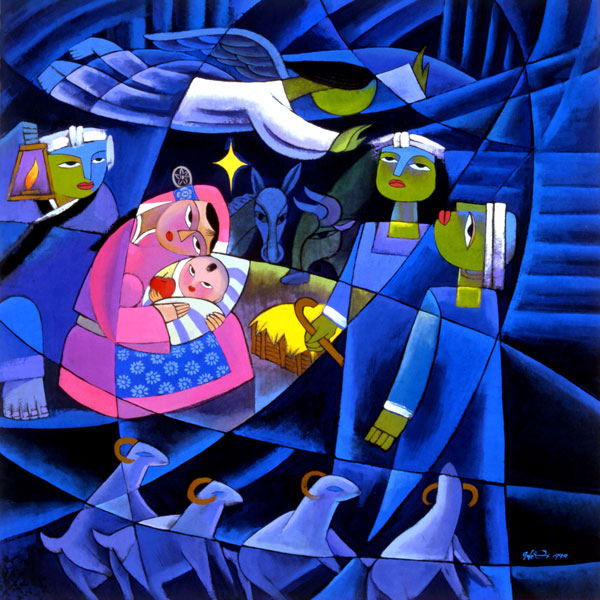 First, I will direct your eyes to the angel. If you look closely at the change in light divided by the geometric lines, it is almost as if we are catching sight of the angel just as his ‘body’ is ‘leaving’ heaven and appearing on earth to announce to the unsuspecting shepherds the good news of the birth of the Christ. Seen from a slightly different angle, it appears as if the angel is rending the veil of cloud and chaos so we can see clearly the Christ child illuminated, who is himself the light of the world.

If your eyes move clockwise, you see a pair of shepherds, clearly identified by the crook and the train of sheep. Their gaze is pointed heavenwards, rapt, as they listen to the proclamation of the angel: ‘Fear not, for behold, I bring you good news of great joy that will be for all the people. For unto you is born this day in the city of David a Savior, who is Christ the Lord’ (Luke 2:10 ESV). I love Jane Williams’s observation that it looks as if even the sheep are dancing at the news (The Art of Advent, 98). The ovine conga line reminds me of Psalm 96, where all creation is described as rejoicing in expectation of the coming of the Lord who reigns and who will judge the peoples with equity:

Let the heavens rejoice, let the earth be glad;
let the sea resound, and all that is in it;
let the fields be jubilant, and everything in them.

Then all the trees of the forest will sing for joy;
they will sing before the LORD, for he comes,
he comes to judge the earth. (Psalm 96:11-13a NIV)

Continuing around, we see Joseph on the left holding a lamp, shining the light on Mary and Jesus. He is only partially in the scene. Part of his body is left off the canvas. It is as if he is already moving out of the picture. This may be suggestive of Joseph dying at some point before Jesus’s public ministry. Perhaps it also points to the idea that God and not Joseph is Jesus’s father.

Spiraling inwards from here, our eyes are drawn to the center of the painting to the clear focal point which is Mary and her newborn son, Emmanuel. Since the Byzantine era, the Virgin Mary is most often represented wearing blue. However, she is here adorned in bright pink. This may be a reference to Raphael’s The Madonna of the Pinks, where baby Jesus hands his mother a pink flower. [3] Pink, being a symbol of marriage, points to Mary as the archetype of the Church. Qi applies many layers here; Mary is wife, but she also is mother. We see her holding the Christ child tenderly, reminiscent of the Raphael painting that so moved Qi in his youth. Jesus is depicted as holding an apple, a clear reference to the Garden of Eden. Jesus is depicted as the Second Adam, the firstborn of a new humanity. 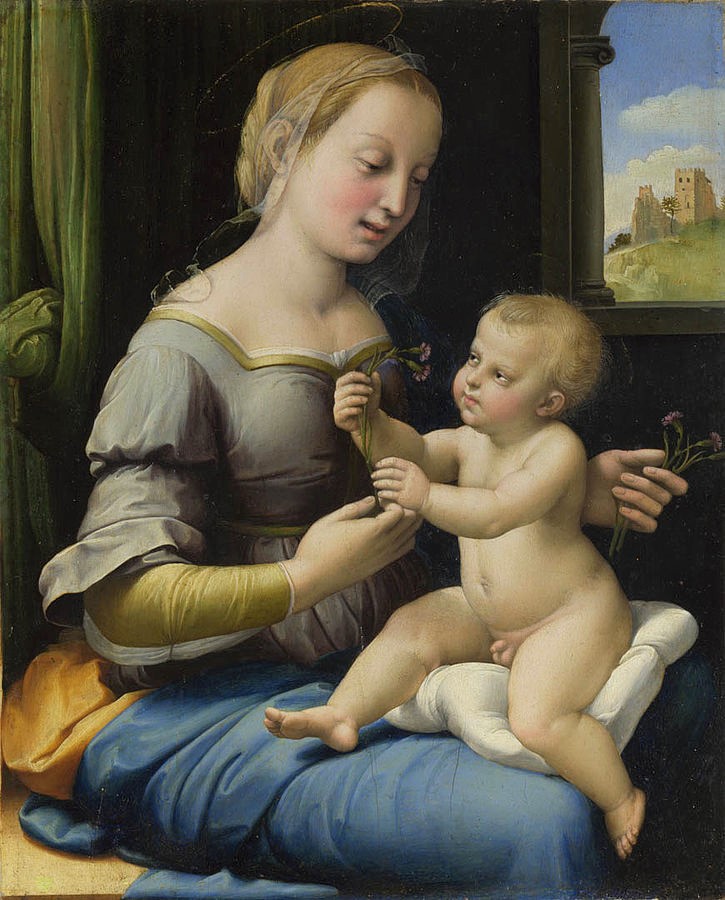 Raphael, Madonna of the Pinks

After considering the subject of Qi’s painting, we now turn our attention to the style in which Qi represents the nativity. If the subject captures one aspect of the seventh antiphon, the notion of ‘God with us’, the style captures another: that Emmanuel is the hope of the nations.

What I want to focus on here is how Qi’s representation marries traditional Chinese folk painting with medieval and modern western art forms. Previously, we surveyed Qi’s background and artistic training. This painting is a fine example of how Qi’s work is a creative synthesis of east and west and of ancient and novel expressions of art. In the Preface to The Art of He Qi, his art is described this way: ‘It is Chagall meets Matisse meets Picasso meets the East’. [4] We see aspects of this in Nativity, which is reminiscent of stained-glass windows one might find in a medieval cathedral. Inspired by medieval European art forms, Qi transposes the biblical story through the idiom of Chinese folk art. It is worth noting the possible influence of modern European art as well. Though the blue pallet is common for much stained glass, there are clear resonances with Chagall’s stained-glass windows. East meets west and ancient meets modern.

Why does all of this matter? In a similar way to how medieval stained-glass windows were created to bear the message of the gospel, Qi understands his art to do the same. Discussing the evangelistic aims of his art, Qi notes: ‘We need to produce Christian art in a Chinese indigenous way so that people will know the Gospel message also belongs to Chinese people, and not just to foreigners’. [5] This is not to say that his work is merely didactic. It is to say this particular painting is a bit like Mary: the bearer of the good news. Remarkably, Qi does this by integrating a wide swatch of cultural expressions.

Qi’s painting of the good news is perhaps most accessible to modern Chinese culture. The Jesus in this nativity is not a white European but would appear to be Chinese. That said, the particular rendition of the story is translatable into all cultures. It should be obvious, but it is worth noting that Jesus was neither European nor Chinese. He was a Jewish man born into a Roman world. His gospel is the continuation of the story told in the Hebrew scriptures but penned in Koine Greek, the lingua franca of the Hellenistic period. The very word gospel is as powerfully resonant in the first-century Hebrew imagination (see Isa 52:7, LXX) as in the Imperial Cult.

By weaving together these diverse threads, Qi’s Nativity reminds us that the gospel of Jesus Christ is always born into a cultural context but it is never bound by it. God with us is always also the hope of the nations.

[1] To get a sense of the antiphons sung, I recommend the Estonian composer Arvo Pärt’s Sieben Magnificat-Antiphonen. Composed in 1988, Pärt orchestrated all seven refrains into one cohesive piece for a capella choir based on the German text of the antiphons. You can listen to it here and read more about it here.

[2] The word Emmanuel is the English transliteration of the Hebrew word that means ‘God with us’. This comes from the prophecy in Isaiah 7:14, which the Gospel of Matthew 1:23 cites in reference to the birth of Jesus: ‘Therefore, the Lord himself will give you a sign. Behold, the virgin shall conceive and bear a son, and shall call his name Immanuel’ (ESV).