[EDITOR’S NOTE: Our series on The Art of Advent: A Painting a Day by Jane Williams continues with Letizia Morley reflecting on the Great Antiphon O Adonai (Lord) and Domenichino’s seventeenth-century painting Landscape with Moses and the Burning Bush. For more information on this series, see our Series Launch.]

O Adonai, and leader of the House of Israel,
who appeared to Moses in the fire of the burning bush
and gave him the law on Sinai:
Come and redeem us with an outstretched arm.

Domenichino’s painting is titled Landscape with Moses and the Burning Bush, not Moses and the Burning Bush. As a visual artist who paints landscapes, among other things, I am aware that Western Europe during Domenichino’s lifetime did not yet regard landscape painting as a high art genre in and of itself, so landscapes nearly always included human figures, usually allegorical, classical, or biblical. However, here we see the landscape is the dominant element, competing with the figure of Moses in the foreground almost as if Moses has a minor part in the grandeur of the scene. The backdrop looks like seventeenth-century Italy, which creates a jarring juxtaposition of the landscape to the biblical desert setting. The area around Moses seems to be desolate and scorched, but if you look beyond it you will see a lush paradise. Given Domenichino’s roots in the Bolognese School of painting, it is likely this idealised scene is modeled loosely on a lake in northern Italy. I will come back to this feature of the painting subsequently. 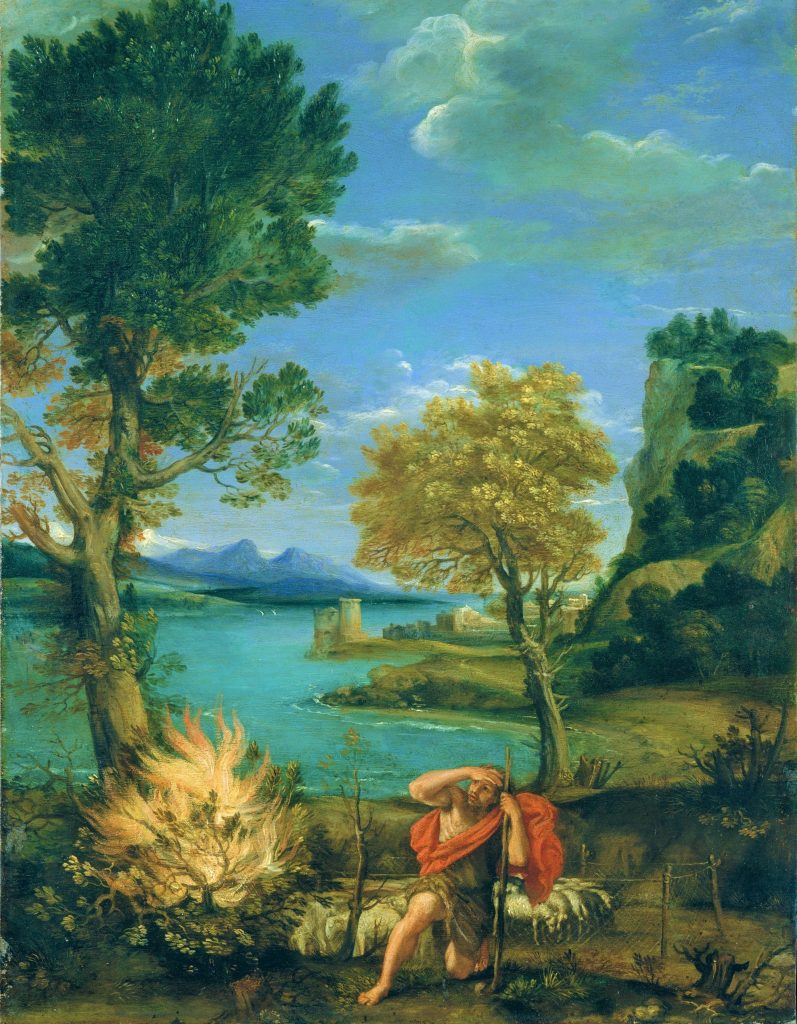 Domenichino, Landscape with Moses and the Burning Bush (c. 1616)

What I notice first when looking at this picture is the castle on the lake, followed by the tree with golden leaves in the centre of the painting and then down to Moses by way of his perpendicular staff. Moses has knelt down in such a way as to form almost a rectangle, similar to a shield protecting himself. His staff anchors him to reality as he peers nervously under his arm at this marvel in front of him. As my gaze moves up, I wonder at the meaning of the bright crimson drapery on his shoulders. Generally, nothing in a painting is there by chance, so I imagine the red cloth as a reflection of his inner thoughts and emotions. The flames of the bush are igniting a burning in his heart to accomplish the Lord’s will for the people of Israel. The drapery doesn’t seem to be obeying the law of gravity, especially on the right side. It’s almost as if the fire from the bush is creating a mysterious wind that doesn’t affect anything else in the painting other than Moses’s cloak. The rest of Moses’s clothing is as you would expect for a shepherd. His feet are bare, as we know from Exodus 3:5 that he has been instructed by God to remove his sandals on this holy ground. Yet, we do not see them in the painting.

Meanwhile his sheep, tucked safely away in their pen, are obviously disinterested in whatever is happening to their shepherd. They do not seem to see the blaze, and that makes me wonder if only Moses could see it. As I am looking at the burning bush, I start to notice that the same yellow colour is echoed in some of the branches of the towering tree directly above it as well as on that prominent tree in the centre of the painting. Curiously, it seems the rest of the landscape is completely green as in summer, but the trees closest to the burning bush are tinged with the colours of autumn. And here is a sad excuse for a tree directly to Moses’s left that mimics his staff almost exactly. It looks a bit like a doorframe made of two sticks. Is this some kind of entry into the mystery? This small sapling also has yellow leaves. What is the meaning of the yellow all round Moses? Perhaps the radical change happening inside Moses’s heart in this moment is having a ripple effect.

Just what is happening to Moses? He is minding his own, probably rather boring, business when God, perhaps not previously successful in attracting his notice by ordinary means, puts on an astounding display. What Moses learns very quickly is that here is a God who is Lord over all: Lord over nature, Lord over all the earth. Adonai is one of the Advent declarations of the nature of God, and it means ‘Lord’. For those who have grown up in the Christian tradition the title of Lord as applied to God is something read and heard so often that sometimes the eyes and the mind skim over it. In further considering the word ‘lord’, I start to think about medieval Europe at a time when vassals would swear fealty to a liege. They would kneel before their lord in homage and pledge an oath of faithfulness and of service. In return the lord would promise some form of provision and support. Moses’s posture in this picture seems to be an act of homage to his new Lord and an indication of awe; when God spoke to Moses out of the burning bush, ‘Moses hid his face, because he was afraid to look at the Lord’ (Exodus 3:6). [1]

Incredibly, four times in this passage spanning from Exodus 3:1 to Exodus 4:17 Moses speaks back to God of his doubts and fears that he will not be able to accomplish God’s plan for Israel. He brings up his own inadequacies over and over. Imagine meeting the Lord of heaven and earth face to face and arguing with him! God doesn’t punish him, although ‘the Lord’s anger burned against him’ (Exodus 4:14). Instead, God slowly convinces Moses through a gentle back-and-forth that He will indeed empower Moses through miracles and God’s own mighty presence. Before Moses finally pledges his fealty, so to speak—at the first time when he calls God ‘O Lord’ (Exodus 4:10)—God has already promised several times over to support him and provide for him. Jane Williams sums this up well in The Art of Advent:

There must be something in the way in which God draws Moses into dialogue that allows Moses to feel, even in the face of this overwhelming display of power, that he is still valued, his co-operation requested, not coerced. God is not enslaving Moses in order to free others. Freedom is God’s goal and that means Moses’ freedom, as well as that of the children of Israel. [p. 80]

God’s call to Moses is a call to freedom in Moses’s place and time. And yet it is also a timeless call to us across the ages. Coming back to the odd contrast of the Italian landscape to Moses’s desert scene, I agree with Williams’s view on this timeless relationship:

This happens to be Moses’ encounter with the divine power, but it is happening in Domenichino’s time and country. This happens to be God’s call to Moses to fulfil his particular vocation, but, by implication, the burning bush awaits any of us: we might come upon our encounter with God and God’s call on our lives anywhere. Domenichino is urging us to attend, so that we will notice our burning bush and leave our accustomed path to investigate and so find out who we are. [p. 81]

At the beginning of this piece I had observed that the prominence of the landscape seems to dwarf Moses’s importance in the scene. I think it is meant to. The Lord who has created the heavens and the earth is so much greater than one mere man, no matter that he is the Moses who is remembered throughout all time. Moses is just one small part of God’s glorious plan for his creation and we should not forget that when looking at this picture. This whole painting is a ‘fill-in-the-blank’ where we can visualise our own place in God’s story and where we can imagine our own surroundings instead of an Italian lake (unless of course you are fortunate enough to live in northern Italy!). Personally, I see the windswept shoreline of St Andrews, the ruins of the Castle jutting out over it, the rolling farmland stretching to the horizon beyond the town. I see myself standing in front of that scene, trying hard to live out God’s call on my life despite everything I think I cannot do.

This whole painting is a ‘fill-in-the-blank’ where we can visualise our own place in God’s story.

As an artist who regularly receives commissions, I often harbour feelings of inadequacy. I always feel moments of fear as I work on a commission, fearing that the client will not like what I come up with or that my skills just aren’t good enough. Yet those things have not happened and I continue to get commissions. Every time I work on a project I pray for God’s help and inspiration. A passage that means a lot to me comes from Exodus 35:30-35:

Then Moses said to the Israelites, “See, the Lord has chosen Bezalel son of Uri, the son of Hur, of the tribe of Judah, and he has filled him with the Spirit of God, with wisdom, with understanding, with knowledge and with all kinds of skills— to make artistic designs for work in gold, silver and bronze, to cut and set stones, to work in wood and to engage in all kinds of artistic crafts. And he has given both him and Oholiab son of Ahisamak, of the tribe of Dan, the ability to teach others. He has filled them with skill to do all kinds of work as engravers, designers, embroiderers in blue, purple and scarlet yarn and fine linen, and weavers—all of them skilled workers and designers.

These are probably not verses that most people think about very often, but they speak to me as an artist. Think about it: what kind of a super-artist was this Bezalel? How could one man be skilled in all those varied artistic skills unless he were empowered by God? Think about who created the mind that imagines, the hands that make, and the creativity and craft that inspire joy in the viewer. If God can fill those artists and artisans of Exodus with incredible skills, he can surely inspire and help me in my own rather less complicated work. When I finish each commission, I feel a sense of peace that God has helped me live out my calling as an artist just a little bit more.

When Jesus came as a sweet and innocent child he also came as Lord, the Lord who is such by birthright and the Lord who comes in power to claim the world. This Advent, I encourage you to look honestly at what you have to offer to God, to lay all that down before Him, and to let his Spirit and provision empower you to do his work in this world.

Domenichino, Landscape with Moses and the Burning Bush, c. 1616: https://upload.wikimedia.org/wikipedia/commons/5/5b/Landscape_with_Moses_and_the_Burning_Bush_MET_DT10296.jpg.

[1] All biblical references come from the New International Version.