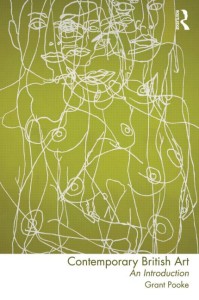 In a dense and informative narration of British contemporary art since the 1980s, Grant Pooke, Senior Lecturer in the School of Arts, University of Kent, not only introduces the reader to a wide range of artists and their work but also provides careful commentary on how the art of this period reflects particular ideologies and/or responds to current cultural and political events. Rather than be a specialist’s guide, this book is written for the “general reader … with the aim of offering a point of purchase and context for what has been one of the most diverse and innovative periods within recent British art history.”[p. 4]

After an introduction that sets a helpful context for the period under consideration, Pooke begins with a chapter on arts funding that considers how the shift from public to private funding has impacted artistic practice, the rise of the artist-celebrity (e.g., Damien Hirst), and how artists have learned to employ marketing techniques to build their ‘brand’ and increase the value of their work. He concludes this chapter with the role art plays in cultural regeneration (specifically public art) as well as economic growth (something I’ve written about previously on Transpositions). The following three chapters group contemporary art in the genres of post-conceptual painting, sculpture, installation art, photography, video, and performance art. In addition to a nuanced explication of the work, the book includes both black/white and full-colour images that are a very helpful accompaniment to the text. Pooke concludes with a summary of the recurring themes that emerge, stating “contemporary art practice increasingly accents the discursive and relational, rather than the ‘private and symbolic spaces’ associated with earlier forms of Modernist practice. Artists … have taken the progressive and utopian narratives of earlier avant-gardes as investigative and critical points of departure for their own practice.”[p. 244]

This book is helpful for someone who desires to learn more about what has formed and shaped the British art scene, both ideologically and aesthetically. While there is no theological content per se, Pooke’s introduction would serve those interested in better understanding the works of contemporary art that have recently been installed in several of Britain’s churches and cathedrals.

Asserting that “public art is still marginalized by the fine arts community,”[p. 2] editors Cameron Cartiere and Shelly Willis have compiled an anthology of sixteen essays by which they hope to overturn its long disenfranchisement and “to claim the history of public art.”[p. 4]

Drawing from its “shared history … in the United Kingdom and the United States” these essays “examine the continual evolution of public art, from contemporary monuments, memorials, and permanently sited works through the expanded forms of socially engaged public art practice and temporary public art projects.”[p. 3]

Chosen to give equal weight to both theory and practice, the essays examine diverse examples of public art which both reflect and confirm the editors’s contention that defining public art is part of the problem and challenge of “bringing” the field “back into academic and critical discourse.”[p. 15] Readers will find their four-category definition [p.15] and the borrowed concept of Rosalind Krauss’s “expanded field”[p. 11-14] a useful starting point from which to engage with this complex arts practice. Certainly the essays will broaden the reader’s understanding of the roles and challenges of public art as well as stimulate debate, which is the editors’s hope.

The essays are grouped into three sections:

This section begins with Cameron Cartiere’s concise overview of the history and contribution of public art and lays an introductory foundation for understanding the field and the issues of marginalisation that plague it. Suzanne Lacy examines the trajectory of new genre public art since the term’s coinage as well as three strategies by which the theory and practice of public art could be critically evaluated. The 1960s “critical debates around site that emerged … [with] minimalist and land art” as well as contemporary “theories of space and place in … cultural geography” form the backdrop of Jane Rendell’s exploration of “current discussions concerning off-site curating and site-specific art.”[p. 33] Using the example of a collaborative project with the Anishinaabe people, Margaret Adamek and Karl Lorenz advocate for the benefits of “postcolonial, culturally hybrid public art.”[p.64] Malcolm Miles raises objections including “the privileging of the visual; the privileging of public spaces as sites for art; and the difficulty of the charisma claimed for modern artists.”[p. 75] Two essays by Stephanie Anne Johnson and Faye Carey, as well as an interview with Harrell Fletcher complete this section by examining the pedagogical issues of public art as it relates to social marginalization, the relationship of art and design, and social practice art.

Replete with real-world examples across diverse locations, this section explores the practical issues of making public art. Through an in-depth examination of Chicago’s Millennium Park, Regina M. Flanagan evaluates its potential and limits as a model for successful public art projects. Shelly Willis reveals the particular “challenges of making art in public,”[p.152] elucidating the limitations of the current public art system and its process. Kristin Calhoun and Peggy Kendellen examine the unique opportunities and particular difficulties of publicly funded temporary artworks in Portland, OR. Terri Cohn explores the work of four career public artists whose are motivated by the “desire to engender ties between people, places, and the contingent nature of the collective, embodied histories.”[p. 178] Carrie Moyer chronicles the efforts of Dyke Action Machine!’s public art projects to transform lesbian and gay visual representation–“a kind of advertising agency for lesbian identity.”[p. 194] James Mariott examines PLATFORM’s combination of “art and activism to create projects which address issues of social and ecological justice.”[p. 204] An anonymous “essay” completes this section, with a list of more then 200 self- reflective questions that are useful to anyone beginning a “place-specific public art project” or developing a “public art curriculum.”[p. 219]

For anyone desiring a snapshot of the history of public art in the UK and USA, the timeline Cameron Cartiere, Rosemary Shirley, and Shelly Willis have created is an excellent reference that chronicles the “establishment of significant … policy and programs, artworks, and events” from 1900-2005. [p. 231]