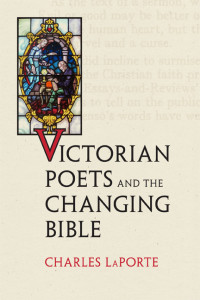 LaPorte is one of the most incisive voices among those involved in not just arguing for a reevaluation of the role and relevance of religion in the Victorian age, but in demonstrating his case through readings of key literary figures of the era. He focuses largely on mid-century authors and demonstrates how Victorian poetry is distinctive from the well-trod ground of Romantic poetry from earlier in the century. In particular, LaPorte explores the way these mid-century poets responded to contemporary debates about the Bible as an historical work while entering upon their own biblical interpretations. In doing so, he challenges the commonly held assumption that the mid-century was epitomic of British secularization, a characterisation that has garnered much support from historians and literary scholars alike. LaPorte is careful to distinguish the mid-Victorian from the (much better understood) Romantic poetry of the earlier part of the century. He demonstrates the continuing relevance of religion in a period usually associated with its decline.

LaPorte highlights the way contemporary theories of secularization anachronistically conclude that the pervasive association of poetry with religion is compensatory for what they perceive as the general move away from all things religious (7). He quotes Hilary Fraser who argues that poetry was responsible in part for religion’s decline (leaving aside that LaPorte would contest the nature and fact of the decline), saying that “poetry was invested with so many moral and mystical qualities that it became, in the rhetoric of many Victorians, inseparable from Religion” (5).

He traces the Victorian experience with German higher criticism – in particular “the revolutionary practice of studying the Christian Scriptures as the collected poetry and mythology of an ancient primitive people – as a mythical, rather than a strictly factual record” (6). That is, LaPorte explains the foundations underlying Christian humanist readings wherein the “independent claims of Science [arguably] supplemented the prior claims of criticism”(6).

Victorian Poets and the Changing Bible details the extraordinary impact of post-Enlightenment biblical criticism on English literary culture and creative production. Specifically, LaPorte details a number of ways in which the reevaluation of the nature and form of biblical inspiration, specifically the watershed of German higher criticism in which the Bible’s poetic nature came to be seen as an integral part of its religious significance, served also to reshape the poetry (and indeed the poets) of the age. The authors LaPorte focuses on are Elizabeth Barrett Browning, Alfred Lord Tennyson, Arthur Hugh Clough, Robert Browning, and George Eliot.

This interpretative shift led poets like Lord Tennyson, Robert Browning and Elizabeth Barrett Browning to redefine their roles and goals as poets. If the Bible is essentially poetry, then in turn poetry might perform a cultural role like that of scripture. However, LaPorte does not just limit himself to openly confessional poets or those for whom religion is viewed positively. Well-known Victorian unbelievers (or agnostics) like Arthur Hugh Clough and George Eliot are shown to have “enthusiastically” clung to the poetic ideal of an inspired text and the prophetic role of the poet. The crux of LaPorte’s argument is that significant developments in biblical scholarship and science did not simply vitiate contemporary religious culture, and that the poetry of the period, from both confessional and agnostic poets, evidences this.

LaPorte’s review of the scholarship is notable, and sets this book in the class of essential reading for literature and theology scholars working on Victorian literature. In addition to Charles Taylor’s landmark study challenging and redefining the significance of secularization in the Nineteenth Century, LaPorte singles out historians of religion such as Callum Brown, Jeffrey Cox, Hugh McLeod and Doreen Rosman for their readings of Victorian history and culture that push beyond the idea that religious beliefs existed in the Victorian era as little more than the “withered remains of a bygone age of faith”. Rather, each demonstrates in his or her own way that Victorian culture evidenced tremendous “religious vitality” throughout the Nineteenth Century. He ably summarises the way in which poetry served the function of “window dressing” for the position that the Nineteenth Century was notable for the decline of religious faith, the rise in poet-centred criticism, and the vatic poet. He also highlights some exemplars of studies which incorporate an historical perspective that acknowledges the enduring role of religion and faith in Victorian poetry, including the work of Emma Mason, Mark Knight and William R. McKelvy.

Yet, while their historical perspective of Victorian secularization may need reevaluation, LaPorte asserts that some of the foundational studies remain “richly insightful”. These studies from the 1950s and 1960s include Jerome Buckley’s The Victorian Temper (1951), John Holloway’s The Victorian Sage (1953), Walter Houghton’s The Victorian Frame of Mind (1957), Morse Peckham’s Beyond the Tragic Vision (1962), and J. Hillis Miller’s The Disappearance of God (1963).

Despite their various backgrounds and the theological variations in their poetic expression, all five of the poets LaPorte examines (among many others he references) are shown to have wrestled with the period’s changing beliefs and opinions about the historical composition of the Bible (and the purpose and form of its interpretation), even as he demonstrates that each of them owes much of his or her individual success to his or her ability to capitalize upon the progress of the emerging avant-garde biblical interpretation.