While the centrality of icons to Orthodox devotion and sacred art is often taken for granted among Western Christians, the visual and theoretical complexity of this tradition and its changes over time are often poorly understood. Likewise, the precise nature of the influence of Byzantine hagiography and iconography on medieval Latin models needs ongoing evaluation and articulation. This present volume is a nuanced and serious attempt to illuminate these issues by exploring the relationship of a particular type of Byzantine iconic tradition, the so called vita icon, to early portrayals of the thirteenth century St. Francis of Assisi. 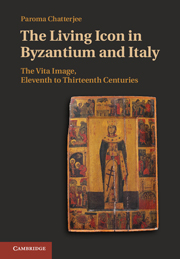 The Introduction sets out many of the fascinating issues involved in the emergence of the ‘vita’ icon, that is, a magnified central image of the saint surrounded by smaller scenes of his/her life, in twelfth century Byzantium. The author uses the metaphor of the ‘living icon’ to describe this new art form, seen as an expansion of the traditional icon to include narrative and temporal sequences that challenged traditional ideas of how to portray the sacred. The argument is made that these smaller scenes from the saint’s life do not merely supply biographical details, but in fact can serve to disrupt and transform conventions of sacred presence by providing re-imagined juxtapositions which require the viewer to meditate on the saint’s life as a many-layered and even ambiguous portrayal of sacred presence. The author asserts that for this to be realized, the vita icons must be understood in light of contemporary hagiography, and how this genre affected the production and meditative viewing of icons.

Chapter One discusses how in the centuries following the official end of the iconoclastic crisis in ninth century Byzantium, hagiographical and rhetorical texts provide a necessary complement to theological tracts if we are to have a fuller understanding of the fluid reality of how icons functioned in devotional life. This also involves sophisticated reflection on the relationship of the material representation of the saint to the saint her/himself, as well as relics of the saint. The chapter also has fascinating discussions of the ‘equivocal status of the artist’ in the production of icons. Chapter Two carries the analysis into the realm of the new vita icons, with a nuanced reflection on their ‘ontological complexity’ and their purported portrayal of a ‘dialectic between interiority and exteriority’ in how the episodes of a saint’s life are to be understood in juxtaposition with their large, traditional idealized portrayal in the central panel.

The final two chapters bring these insights to bear on early portrayals of St. Francis in Italy, where the argument is made that the Byzantine vita icon serves as the model. The rich, complex and enigmatic hagiographical details about Francis, as well as the need to somehow portray him in art as bearing the stigmata as the culmination of his life as an alter Christus, was a new and challenging task for artists and hagiographers alike.

The author brings this out in nuanced and fascinating ways, making clear that many of the sophisticated concerns and approaches of the Byzantines were adapted by Franciscans to meet the exigencies of their own unique situation as they sought to portray Francis’ own life and indeed stigmata-bearing body as a type of sacred text itself.

This book is a very important study about the complexity of Byzantine iconography, and how a fuller understanding of this can be gained by a careful complementary reading of hagiography and theological texts, and the issues involved for artists and audience in mediating and meditating upon the nature of sacred presence in the material. It is also useful for understanding the relationship of Italian and Byzantine art in the thirteenth century, and how in some ways the very different concerns of Franciscans could be informed by the Byzantine vita icon as they followed their own path of determining how best to portray in art and words ‘the poetics of revelation and concealment,’ the immediacy and mystery of a saint’s life and meaning for the viewer. As such it should be of interest not only to medievalists, but to all those interested in the complex relationship between sacred art and audience, as well as the challenges of portraying the spiritual in the material.