This book brings together a collection of essays on the role and practice of Christian visual art.  The seven authors are a variety of Catholic, Orthodox, Anglican and Protestant academics, artists and priests, all of whom took part in symposia to commemorate the 500thanniversary of the Protestant Reformation in 2017.  The book’s editor, Timothy Verdon, an art historian and Roman Catholic priest, expresses the hope that visual art ‘might become an instrument of communion amongst separated Christians’ [p. v] and thus serve as a vehicle for the propagation of Church unity. 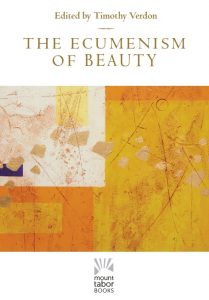 This is an easy read, with over thirty colour plates and the inclusion of interesting contemporary artwork mixed with some historical pieces.  All the authors refer directly to scripture texts in their essays, grounding their thoughts directly in the Word of God, rather than in any particular tradition or denomination, making their reflections accessible to a variety of believers.

In his preface, Verdon cites Pope Paul VI, stating that ‘beauty can bridge differences, favour communication, and unite people in shared admiration’. [p. v]  Reinforcing this view in his introduction, he quotes Pope Benedict XVI as saying, ‘artists. . . have offered to the contemplation and wonder of believers the salient facts of the mystery of salvation, presenting them in the splendour of colour and in the perfection of beauty’. [pp. x-xi]  Verdon goes on to suggest that beauty is at the service of faith, expressing more than what words are capable of. He states, ‘art exposes us to the shock of an encounter with the supernatural’, [p. xv] disorientating us so as to open up the possibility for new perceptions and at the same time communicating something of the joy and fear of the encounter in a way that makes us want to stay to experience the mystery for ourselves.

In the first essay, Jérôme Cottin summarises very succinctly the different approaches of Luther and Calvin towards religious art. While ‘Luther advocated for images stripped of aesthetic connotations’, Calvin preferred ‘aesthetic experience free of images’. [p. 6]  A good analysis of some paintings from a Calvinist perspective is included, in which Cottin points out that still life paintings, landscapes, and scenes of everyday life each have a theological role; suggesting ‘a meditation on the reality of death’, ‘the beauty and immensity of Gods creative action’, and ‘a faith lived in the daily routine of family life’, respectively. [pp. 8-9]  However, the most relevant part of this essay in terms of such expressions providing hope for future common understanding of God is, I believe, in his concluding remarks about twentieth century artists that have been influenced by the Protestant tradition.

In using visual metaphors to ‘express God’s greatness and his unfathomable goodness’, Cottin believes artists can appeal to a contemporary audience of spirituality-seekers.

Had more attention been given to these ideas, their works would have had more direct relevance to the current challenges to Church unity. William Dyrness echoes much of what Cottin says, suggesting the time has come for Protestant sacred spaces to embrace visual art but does not indicate how this will lead to greater unity within the wider Church. 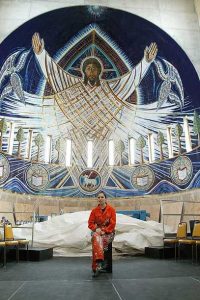 Essays by the two artists, Susan S Kanaga and Filippo Rossi, give insightful accounts of their work and interesting reflections on their creative processes, highlighting the responsibilities shouldered by a faithful Christian artist.  They show how, with works of beauty and truth, the Protestant and Catholic divide can be bridged both with and without interdenominational artistic collaboration.  This is in stark contrast to Vasileios Marinis’ comparison of Byzantine icons to western Renaissance paintings which, while interesting, seemed to emphasise the difference between the Church in the east and the west rather than provide a framework to explore common ground.

Verdon concludes the book with a clear account of the role and relationship of visual art associated with the liturgy, but sadly illustrates his text with pre-Protestant Reformation works of art.  Perhaps if more current examples had been selected the book would have been able to better portray how art and artists could serve not just for purposes of worship, but toward the reconciliation of various Christian Church traditions. One such example is the contribution by Martin Shannon in his description of the worship space at the ecumenical Community of Jesus in Massachusetts, where liturgy, art and architecture is, in living relationship with the participants, providing a place of transformation and unity that is greater than the differences that have in the past divided.  This example from the community which published the book is perhaps a vision of hope from which we can contemplate the future of ecumenical relations and the role art might have in uniting the body of Christ.

0
Facebook Twitter Pinterest
LinkedIn Email
Written By
Liz Crichton
More from Liz Crichton
[EDITOR’S NOTE: In the next instalment of our series on artists and...
Read More