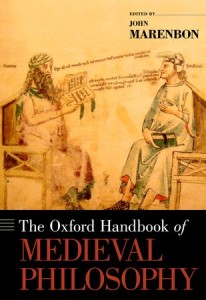 In this Handbook, Marenbon “presents the state of the art in medieval philosophy as studied in connection with contemporary analytical philosophy.”[p. 1] The Handbook includes thirty-three chapters grouped into two post-Introduction parts: 1) A Survey of Medieval Philosophy, and 2) Issues in Medieval Philosophy. The latter is divided into four sections: a) Logic and Philosophy of Language, b) Metaphysics and Epistemology, c) Moral Psychology, Ethics, Political Philosophy and Aesthetics, and d) Philosophy of Religion. Once again, I have chosen one chapter for special consideration; namely, Chapter 31: “Aesthetics” by Andreas Speer.

Marenbon gives context, noting: “On the one hand, there are a number of studies of ‘medieval aesthetics’ by distinguished scholars; on the other hand, there are good reasons to think that medieval authors never discussed the matters conceived as aesthetics since the eighteenth century…. aesthetic theory is often discerned in medieval texts only by misreading them, and by pointing to the real characteristics of medieval theorizing about beauty and the arts.”[p. 12] That said, Speer’s chapter is divided into five parts: 1) What is in Question, 2) Abbot Suger’s Writings on the Abbey Church of Saint-Denis, 3) Thomas Aquinas, 4) The Schedula Diversarum Artium, and 5) Instead of a Conclusion. Generally speaking, Speer concludes that “we should not lightly apply any universal aesthetic paradigm or invoke trans-historical categories of beauty and art in order to improve our understanding of … ‘medieval art’.”[p. 676]

Positively, Speer’s article would be a great conversation starter in the classroom or pub. Question: If we can’t apply Baumgarten, Kant and Hegel (i.e., a universal aesthetic paradigm) to medieval art, then how might we “rethink this question?”[p. 662] Speer has given us “the possible answer,”[p. 676] and while the six lines he draws are to some extent helpful,[pp. 676-677] I’m not sure that they’re entirely clear. In fact, it’s clear they’re not. Discuss. 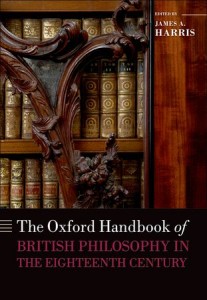 In this Introduction I consider three questions: first, when did the eighteenth century in British philosophy begin and end? Secondly, is there a reason to talk in terms of British philosophy in this period, as different and distinct from English, Scottish, Welsh, and possibly also Irish and American philosophy? Thirdly, how should philosophy be defined in an eighteenth-century British context?[p. 1]

Briefly, Harris concludes that eighteenth century British philosophy began in the late seventeenth century with the publication of John Locke’s Essay Concerning Human Understanding (1690), but does not impose a “single end-date for the eighteenth century in British philosophy.”[p. 2] Regarding the question of British philosophy being distinct from English, Scottish, Welsh, Irish and American philosophy, Harris concludes that “it makes sense, I believe, to resist the fragmentation of Great Britain into its constituent parts.”[p. 5] And finally, with regard to the matter of definition, Harris – drawing upon dictionaries, encyclopedias and syllabi from the period – points out that “the eighteenth century understood the subject to be as much practical as theoretical.”[p. 7] Along these lines, he notes: “In eighteenth-century Britain it could not possibly have been said, as it could be now with some plausibility, that philosophy is in essence what salaried professionals teach and publish.”[p. 7] He continues: “Readers–consumers–of philosophy were in large part ordinary men of the middle classes.”[p. 8] But what of women? Harris notes: “Universities were not open to women in the eighteenth century, but philosophy was.”[p. 8] Most interesting for readers of Transpositions, however, is this tidbit:

Eighteenth-century philosophy did not always come neatly packaged in the form of a treatise or an enquiry or a dissertation. Reflection on the human condition, on our capacities and duties, on our relations with our fellows, with our creator, with ourselves, was to be found in essays and novels and poems as well.[p. 8]

All in all, it is difficult to know in eighteenth-century Britain when ‘philosophy’ is a subject matter, or several subject matters … and when it is what might be termed, very roughly, a style of thinking and of writing, a frame of mind, an attitude, a way of treating a question, whether that question be one in trade or in perception, in chemistry or in ethics…. We need to take care in considering how the word ‘philosophy’ is used in different times and places.[p. 9]

All this being said, Harris adopts Hume’s definition.[p. 10] The Handbook includes twenty-seven chapters grouped into seven post-Introduction parts: 1) The Languages of Philosophy in Eighteenth-Century Britain,  2) Logic and Metaphysics, 3) The Passions, 4) Morals, 5) Criticism, 6) Politics, and 7) Philosophy and Religion. Here again, I have chosen one chapter for special consideration; namely, Chapter 20: “Genius and the Creative Imagination” by Peter Kivy.

Kivy begins by arguing that while conversations about the concept of genius often begin with the nineteenth century and German romanticism, better to begin with the British sources from which the German Romantics drew. That said, Kivy begins with two ancient sources that informed the eighteenth-century British conversation: Plato (Phaedrus and Ion) and Longinus (On the Sublime, Peri Hupsous). Kivy then considers Joseph Addison’s contribution (i.e., originality) before turning to Edward Young who, like Addison, construes genius in terms of originality rather than the sublime. The contributions of Alexander Gerard and William Duff are then considered, the former being, in Kivy’s estimation, “the more original thinker.”[p. 484] For Gerard, imagination, and more specifically “the enlarged propensity of the imagination,”[p. 485] that was “the seat of invention and, therefore, of genius.”[p. 484] And here, the association of ideas and judgment come into play. Kivy concludes:

Positively, Harris’s Introduction was extremely clear, and thus helpful. It not only introduces, but encourages the curious mind to dig deeper. And Kivy’s chapter, much like Harris’s Introduction, brings the reader along, supplying loads of helpful context. Extremely helpful, and highly recommended.