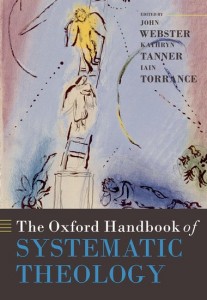 In the introduction to this Handbook, after parsing the designations “Christian doctrine,” “dogmatics,” and “systematic theology,” and with regard to the work of systematic theology which is “characterized by a measure of internal contestation,”[p. 2] John Webster writes:

What follows is an excellent introduction to the field, one that considers history, task, form and organization. That said, the following sections stood out. Webster notes:

The most illuminating systematic theologies are often characterized by (1) conceptual ingenuity, resourcefulness and suppleness, which enable a projection of Christian claims suitable to draw attention to their richness and complexity; (2) conceptual transparency, which enables a more penetrating understanding of the primary modes of Christian articulation of the gospel; and (3) broad knowledge and sensitive and creative development of concepts inherited from the Christian theological tradition. By contrast, systematic theologies are less successful if they are conceptually monotonous or stiff, if concepts threaten to overwhelm or replace that which they are intended to represent, or if the concepts do not have a discernible relation to well-seated theological usage.[p. 10]

Put simply, “the most memorable and consistently stimulating works in systematic theology are not those which have maximally elaborate or coherent ground plans, but those which register the grandeur of Christian truth in their concepts and schematism, and in which material, rather than formal, skills have been paramount.”[p. 14]

Concerning these material matters, the Handbook includes thirty-seven chapters grouped into four post-Introduction parts: 1) Doctrines, 2) Sources, 3) Conversations and 4) Prospects. As has been my practice over the course of this week, I will choose one chapter for special consideration; in this case, Chapter 31: “The Arts” by William A. Dyrness.

It may be helpful to place views relating art and theology on a spectrum. Beginning on the left, one might describe theologians who have privileged symbols or aesthetic impulses as either deriving from or dependent on God, or some transcendent ground; those in the centre want to hold together the symbol and the transcendent ground (or the natural and the subjective); and those on the right believe that art objects can only model or reflect theological truth. One might say that, on the left, theological meaning is intensive, suggesting contemplation; while, on the right, meaning is extensive, stimulating faithful practice. One focuses on God’s immanence, the other on divine transcendence.[p. 562]

That said, the chapter is divided into four parts: 1) Theology and Aesthetics After Kant, 2) Neo-Romantic Aesthetics, 3) Neo-Thomist Theology of Beauty and 4) Protestant Theologies of Art. In the first part, Dyrness discusses Immanuel Kant, Friedrich Schleiermacher and Paul Tillich, and describes them as “privileging the experience of the symbol or aesthetic impulse.”[p. 565] In the second part, Dyrness considers C.S. Lewis and David Bentley Hart, who “privilege the divine subject to which the symbol or story draws us, and who is the personal source of its power.”[p. 565] In the third part, Dyrness introduces Jacques Maritain, Hans Urs von Balthasar and Roberto Goizueta. “[T]hese thinkers, taking their cue from the incarnation and sacraments, focus on the object of beauty itself as carrier and extension of God’s presence.”[p. 568] Finally, in the fourth part, Dyrness covers Jonathan Edwards, Abraham Kuyper, Hans R. Rookmaaker, Calvin Seerveld,  Colin Gunton and Jeremy Begbie. “These all share the Reformers’ suspicion of medieval notions of participation and analogy and therefore see art as fundamentally metaphoric and illuminating of, rather than transparent to, the divine presence.”[p. 572]

While “brief and limited,”[p. 577] this survey is nevertheless helpful. More specifically, the previously mentioned spectrum provides a helpful framework within which the reader might engage one or more of the many names and approaches that follow. That said, it would have been helpful to engage (or suggest the reading of) George Pattison’s Art, Modernity and Faith, 2nd ed. (London: SCM, 1998). Pattison deals with the difficulties and dangers of these sorts of conversations, emphases that might have been more explicit here. This chapter is, in any case, recommended for students of theology and the arts, as well as those theologians wondering what all the fuss is about.