Few matters are more central to the discipline of theological aesthetics than the dynamics of human perception. Theological aesthetics is chiefly concerned with how we perceive – literally and metaphorically – the intersection of divine activity and human artifice. Considering and deciding upon an account of perception, of how humans see, is therefore a critical part of the aesthetic enterprise.

Two disciplines of research can serve as helpful resources in this venture. One is neurobiology; the other is philosophy. John Searle, Professor of Philosophy at the University of California, Berkeley, brings his expertise in philosophy to bear alongside neurobiology in constructing a theory of perception he nominates as Direct Realism. Like so many other terms deployed in the book, this phrase requires definition and is related to a larger set of concepts and a tradition of discourse. 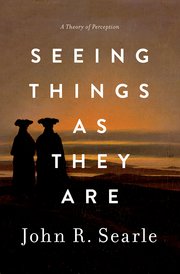 At the center of Searle’s account of human seeing is the concept of intentionality. Intentionality is, for Searle, rooted in biology: in the way humans are made. Intentionality, for Searle, means ‘that feature of the mind by which it is directed at or about or of objects and states of affairs in the world’ (13). Derived, as Searle points out, from the Latin intension – meaning aim or extension – intentionality involves the organism’s requirement to rightly relate itself to the context of its existence. As such, the intentionality of perception finds satisfaction only if it meets with the causational objects of the real world; ‘a perceptional experience is satisfied only if the state of affairs perceived causes the perceptional experience’ (36). And it is access to the real world, an ontologically objective existence outside the ontologically subjective perceptional experience, that Searle is most concerned with arguing for in this book. It is to this end that he terms his theory of perception a form of Direct Realism.

Though it may not seem so to the innocent reader, Searle’s argument here takes direct aim at a foundational assumption running through much of Western philosophy since the 18th century – namely that humans have no such direct access to the real world, but rather only have access to the workings of the human mind; that is, we think we see causation and relation between things when, in fact, we impose such workings on the world. This was Hume’s proposition, which in turn awoke Kant from dogmatic slumbers and has since defined much of Western philosophy in its wake, with countervailing perspectives coming mostly from forms of common sense realism and Thomistic metaphysical realism. Searle, however, founds his argument upon appeals to ‘the basic biology of perceptual experience,’ and the causal relationship between the external stimuli and the internal visual experience: ‘The cause of the visual experience begins with the reflection of photons in the objective visual field. After the stimulation of the photoreceptor cells, the internal processes in the nervous system are causally sufficient to produce the conscious visual experience’ (164).

Admittedly, the book suffers from a somewhat pedantic repetition about the workings of human sight, but there is over two hundred years of philosophical intrigue at stake in this outline of basic visual experience: an obviousness which seems to elude many in academic philosophy, if indeed Searle is correct.

Searle’s account of Direct Realism is not without an awareness of an interpretative dimension of visual experience, however. All seeing, according to Searle, is “seeing-as,” and the arts, along with ‘cultural, educational, and developmental experiences’ (71), contribute to our capacity to see-as what we do see. To see X as Y requires that (1) we truly see X, but then that we (2) interpret X as Y, which involves a process of elimination and integration that reflects those prior cultural, educational and developmental experiences. In this, Searle appreciatively mentions the work of familiar figures from aesthetics, such as Ernst Gombrich and Arthur Danto. [1]

Born from a practitioner’s anguish at the intractability of a bad idea at the heart of his discipline, Searle considers his book a ‘celebration of visual experience’ (3), and this again brings us directly back to aesthetics. Aesthetics is the study of sense perception, and as such those involved in aesthetics should have a coherent account of what they believe is going on in sense perception. Philosophy is an indispensable partner to aesthetics in the task of definitional clarification and logical coherency, and in this Searle’s book is a good resource for the philosophical dimension of theological aesthetics. As with many projects in constructive philosophy (and theology), practitioners operate with idiosyncratic use of terms, and Searle is no exception. I suspect that, for many neophytes to the conversation, this text – though characterized by brief and sparing use of technical jargon, accompanied with illustrations – will require careful and repeated reading. Nevertheless, the effort will be well repaid in the light Searle sheds on this most central of matters to aesthetics.

[1] As one who affirms a creational ontology of the world, I appreciate Searle’s advancement of a realist theory of perception, one that maintains an objective reality as the intentional content of the subjective visual process. His account of background capacities involved in perception corresponds with my own preoccupation with the dynamics of spiritual formation, which involves those elements of culture, education and development.  [Editor’s Note: For further information on the reviewer’s perspective on this topic, see his recently published monograph Sense and Spirituality: The Arts and Spiritual Formation, reviewed recently for Transpositions: https://www.transpositions.co.uk/review-sense-and-spirituality/]