In her insightful and well-researched monograph, Science in Wonderland: The Scientific Fairy Tales of Victorian Britain, Melanie Keefe offers a systematic and comprehensive study into the central role that fairy tales played in the conveyance of scientific knowledge during nineteenth-century Britain. In contrast to the ‘familiar and much-abused trope of the “death” of fairy lore due to the progress of modern society’ (40), her purpose is to demonstrate and elucidate the primary role of fairy tales in shifting perception away from a mechanistic view of the universe and toward an understanding of the magic and invisible recesses permeating nature.

According to the author, the purpose in deploying the fairy tale genre was three-fold: to provide insight into what the new scientific disciplines were trying to do; how they were trying to establish their place in the world; and how they hoped to recruit and train new participants (18). In essence, these scientific fairy tales hoped to demonstrate that the new discoveries within the scientific world proved much more strange and enchanted than the dragons and monsters found within traditional folk-stories of ancient tradition. 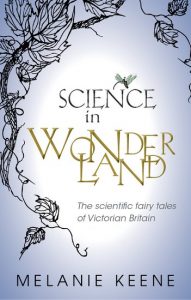 After providing an informative contextual overview concerning the rise of scientific fairy tales, Keefe begins her work by arguing that the nexus between science and fairy tales was more abridged than what may be believed initially. In fact, it is a theme that she traces and emphasizes throughout the entire work. Furthermore, Keefe conflates the separation between fairies and creatures by demonstrating that fairies were depicted often as butterflies and other insects found in nature (chapter 2). Subsequent discussions reveal the charmed elements infiltrating the mysterious and fluid compound of water (chapter 3), the emerging theories of Darwinian evolution (chapter 4), the various technological advances of microscopes and telescopes (chapter 5), as well as the arrival of modern marvels, such as the telegraph, railroad, and hot-air balloon (chapter 6). A child did not need to open the pages of a book in order to enter wonderland. Rather, they merely needed to open their door and their eyes in order to see creatures within the natural order that often soared beyond their literary imaginations.

The descriptor of nineteenth-century fairy tales as didactic is well known throughout Victorian studies and Keefe does well to elucidate this feature beyond mere moral lessons and into the scientific purposes of these stories. Whether through the moral teachings of ‘Fairy Know-a-Bit’ or the ubiquitous presence of an imposing narrator, these works emphasized the important role that books and fiction played in educating childish audiences. For example, Charles Kingsley’s The Water Babies (1863) introduced a narrator with a strong identity who would often break through the story to speak directly to his young charges in order to illuminate the important role that fairies actually played within the scientific advances of the age. As Keefe observes, ‘Tying together physical, moral, social, and spiritual evolutionary themes, the nursery classic made pointed commentary on scientific debates of the day.’ (113)

Whilst unintentional theological fingerprints can be traced throughout Keefe’s discussion, it comes to the forefront in the connection made between these particular fairy stories and natural theology. Similar to the apologetic works of Joseph Butler (1692-1752) and William Paley (1743-1805) responding to Deism, these writers of scientific fairy tales often played upon the religious analogy tethering much of contemporary natural theology. Thus, nature proved to be God’s ‘second book’ of revelation to be closely read for spiritual and intellectual enlightenment. This claim is illustrated poignantly in the observation made by Margaret Gatty in her Parables from Nature (1855): the ‘strange and mystical transmigrations that I have observed in silk-worms turned my philosophy into divinity.’ (62)

One of the most compelling contributions of this volume for both literature and theology is the one not stated. As one reads through this monograph, the following underpinning question emerges: what does the role and nature of imaginary literature play in epistemic considerations for all academic disciplines, including theology? As Keefe astutely notes, ‘There is hardly a topic that interested Victorian audiences that was not recast in fairy tale mould; not least, the sciences’ (16).

Her work forces the reader to contemplate the close relationship that imagination has with reason and the role it plays in all forms of epistemology, including religious knowledge.

Moreover, she traces the metaphysical outlines of existential doubt as fairy tale readers came to view themselves as characters within a larger narrative and the salient role inhabited by the author (137).

Perhaps the greatest deficiency of this book comes at the expense of one of its greatest strengths. Whilst she provides a compelling case for the use of fairy tales in educating children in the sciences, she does not address the results or reception of this pedagogical methodology. We never know how effective this instruction was in meeting the tripartite goals mentioned earlier or why G. K. Chesterton (1874-1936) felt compelled to lament during the subsequent Edwardian period, ‘Why did anybody have to remind us that [natural things] were amazing? Why was there . . . a sort of daily fight to appreciate the daylight; to which we had to summon all the imagination and poetry and labour of the arts to aid us?’ [1] Moreover, she leaves absent any in-depth discussion concerning possible contrary views amongst scientists toward the relationship between fairy tales and their particular discipline.

In the end, Keefe should be commended for expanding our understanding on the use of fairy tales in Victorian Britain beyond simplistic and reductionistic explanations concerning the dominance of reason in scientific praxis. She adeptly argues that this central aspect of nineteenth-century scientific and literary history deserves much more attention and provides an important study to dispel any notions that this practice was established within a historical and theological vacuum.

As such, Science in Wonderland, is a well-written and carefully argued work that will provide a much-needed corrective regarding our understanding of scientific fairy tales in nineteenth-century Britain and push us to reconsider the role of the imagination in understanding the natural world around us.