Marcel Hébert’s study outlines the evolution of Richard Wagner’s view of religion, and in particular Christianity, as it is portrayed throughout his works. As such, it serves quite well as a thoughtful introduction to Wagner’s work for a theologically-inclined interpreter. In this case, though, the author’s own historic and intellectual remarkability provides a reason for a further layer of interest, resulting in its re-publication into a new translation, over a century after the original work was published. 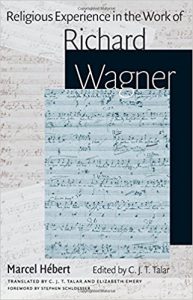 It is a formidable challenge for any author or translator to introduce the complex philosophical quirks of not one, but two rather idiosyncratic thinkers and movements. However, the translator-editors have fulfilled this task with commendable clarity and concision. Stephen Schloesser’s foreword situates the reader well in Hébert’s context and his paradoxical positioning between Catholicism (a tradition renowned for its esteem for permanence, and a certain reactionary quality) and Modernism (a movement arguably focused on the sceptical; the transient; the agnostic). Moreover, he provides a helpful sketch of the Symbolist movement, which stood in opposition to ‘Realism’: ‘a fiercely aggressive ideology’ of ‘one-dimensional reductionism of reality to what is perceptible and passing’. (Foreword, xi).

Criticising this style of thought, the writer Charles Baudelaire wrote on the eternity and timelessness of beauty, which combined essentially with a ‘relative, circumstantial element’. Symbolists such as Stéphane Mallarmé took this principle further and ‘gave pride of place to the invisible’, suggesting that ‘true reality [can] not be seen; it cannot even be named – for to name something is already to have some mastery over it; it is to have comprehended the mystery’ (xi-xii).

Hence, symbols were used to ‘point to’ reality; and a symbolist ideology, though vague, also tended to prioritise ‘anti-realistic’ sources (especially mythology of all kinds) which ‘facilitated the evocation or suggestion of the anti-material, the mystical, the imaginative, the halluncinatory, the dream state’ (xiii). For these purposes the most effective artefacts would have been the ‘ultimate expression of unity of literary texts’: ‘Wagnerian opera, the “Total Art Work” [Gesamtkunstwerk]’ (xiii). Historically, Wagner’s work, especially because of the use of mythology therein, became ‘the rallying point for French Symbolism’ (xiv).

Developing a taste for Wagner’s work in the position of ‘flâneur’, and framing a somewhat new perspective on how the composer’s ideals evolved over time, arguably served as a ‘bridge’ for Hébert to cultivate his own philosophy (xv). The overall ‘problem’ for the artist, as phrased by Baudelaire, was ‘how to represent the eternal and the immutable in the midst of all the chaos?’(xv). Addressing this, Hébert wrote of universal ideas being contained transitory vehicles, but insisted on “the superiority of image over abstract idea in its power of attraction”; ‘the imperative not to separate the image “from feeling”’ (xv).

It seems right of Schloesser to describe these elements of Hébert’s theo-aesthetic theory as ‘quasi-sacramental’ (xvi); indeed, such ideas link well with what David Brown has recently written about ‘the sacramental’ being a category which serves well being applied to physical objects and cultural experiences well beyond the usual confines of the church.

Here, the idea is linked to the importance of the emotions, which is so central to the pamphlet as to be connoted in its very title, which is in the original French, Le Sentiment religieux dans l’oeuvre de Richard Wagner – although, as the translators seem to be correct in generalising, ‘experience’ is the more encompassing term in English for what Hébert meant.

Although the particulars of Wagner’s work are dealt with attentively, Schloesser infers rightly that Hébert’s work might have a further-reaching purpose as ‘an attempt to construct a “universal” and even “natural” religion’, which ‘for him […] entails, above all, a morality’ (xvii). At the centre of this morality is love, which needs careful definition in its dual function as ‘both a feeling [sentiment] and the kind of moral action elicited by emotional attraction (desire)’ (xvii); ‘a complex “sentiment”, neither merely emotional nor merely moral, that must evolve’ (xviii), and indeed does evolve in its conception throughout the course of Wagner’s productions.

The main body of Hébert’s pamphlet, as handled precisely and compellingly by the translators, discusses this change. The earliest of Wagner’s works to be discussed, Jesus of Nazareth, esteems Love highly but fails to define it precisely, resulting in an exaggerated dichotomy between its transformative powers and the self-regarding materialism which is defended by the Law. Such exaggerations, Hébert holds, ‘are foundational for anarchist theory’, leading to a way of thinking which dismisses hopes for gradual change, evolution, in favour of the kind of revolution which was exemplified at the time by the Dresden uprising, in which Wagner is said to have participated. Revolutionary spirit, Hébert argues, also pervades The Ring, which points to some surprising redemptive capacities in the love that is manifest in self-sacrifice, but also Wagner’s unwillingness to show this kind of love exercised in his heroes. 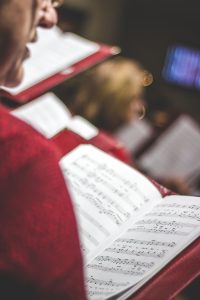 A similar pessimism extends further, however, in Tristan and Isolde, towards ‘the desire to be, the will to live’ (62-3). In this work, the suggestion for his heroes is that ‘Death alone can deliver love from its material fetters’, a thought that Hébert remarks is ‘a long way from the time when Wagner, under the influence of the Hegelian school, exalted conjugal love as developing and flourishing into pure love of humanity!’ (68).

However, a more hopeful view of love was presaged by Wagner’s increased writings on the religious potential of art: ‘The role of art is to save the ideal element of religion in separating from the literal meaning of dogmas their true signification and translating this signification through increasingly expressive concrete images’ (81). Such a practice is shown in Parsifal, in which Hébert says Wagner ‘reincarnate[d] the “soul of Christianity”’ (84). The character Parsifal thus represents the power of charity, even in ‘the absence of intelligence’ (although, as Hébert reasons, the apparent idealisation of naivety and foolishness has problematic further implications) (87). Thus, Hébert writes, ‘Parsifal is […] a work that is profoundly, essentially religious, without, however, affiliating Wagner with any official theological creed’ (85).

With little experience in either translation or context, the possibility of my writing a critical review on these particular details is limited. Nevertheless, the potential of this work to appeal to an audience with interests beyond these aspects can be extolled. Hébert provides a particularly liberal, earthly perspective for theological studies of the sacramental and the Platonic, contributing to the debate on how the arts can be used for devotional and transformative purposes.

In recent, sociological reflections, the term Gesamtkunstwerk has been applied even to popular music for its capacity for providing a transformative, total experience for even the most earthly users, in commercial and consumer contexts (see Tia DeNora, Music in Everyday Life (Cambridge: Cambridge University Press, 2008); Michael Bull, Sound Moves: iPod Culture and Urban Experience (London: Routledge, 2007)). As studies like this show, Hébert’s appeal for the centrality of the arts in making spiritual revelation possible are well worth revisiting in translation and republication in their ongoing, sometimes prophetic relevance.