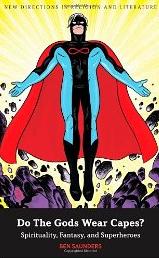 Only half-jokingly I occasionally recommend to my students that they follow the Law of Diminished Expectations: if you go through life with your expectations low enough you’ll never be disappointed, and you’ll frequently find yourself pleasantly surprised. I cannot recall the last time that I was as pleasantly surprised as I have been reading Ben Saunders’ Do the Gods Wear Capes?: Spirituality, Fantasy, and Superheroes. When I discovered that he was examining superhero comic books from a theological perspective, I was anticipating reading a great deal of allegorical, Superman-as-Jesus type material. There is nothing of the kind here.

Saunders is talking about theology, philosophy, American culture, literary theory, gender roles. And comic books. He writes, “superhero comics are especially, generically, suited to the task of engaging, expressing, and addressing urgent ethical and existential questions” (15). And he is right. I have been convinced.

For a variety of reasons, to be sure, words like philosophy and theology tend to put people on their guard. Ninety-nine percent of folks are going to respond negatively to the invitation, “I’m having a party at my place where we’ll be discussing the competing theodicies of Western and Eastern philosophical systems.” While comic books might tend to make most people roll their eyes, they do not put people on the defensive; they are perceived to be (and frequently are) a harmless, amusing form of lowbrow entertainment. Saunders contends, however, that comic books create a space uniquely suited to the types of thought experiments that otherwise only take place in the classroom or in professional writing. He describes his goal for the book this way:

“My purpose is not simply to render these intellectual concepts more accessible by applying them to a well–known figure of pop culture, a project that by itself runs the risk of patronizing popular art and popular audiences. I also hope to show that the comics themselves constitute a sophisticated approach to some profound problems of human agency in the face of suffering…. [Comic books] can in turn illuminate some key aspects of psychoanalytic and existential philosophy.” (73–74)

The introductory chapter highlights the primary focus of the book, which is love: “because this book is about superheroes, it cannot help but also be about spirituality—and consequently it is also about love” (15). The body of the work is divided into the following four sections.

Chapter 1 – Superman: Truth, Justice, and All That Stuff

Superman has the moral reputation of a Norman-Rockwell-era Boy Scout. He offers an opportunity “to depict what philosophers since Plato have called the good” (17–18).  The challenge for writers, though, has been to try to determine exactly what it is that the American people mean by “good” from the 1930s through the first decade of the twenty-first century. The history of this character “illustrates a simple but powerful idea that has rendered problematic every attempt to found a universalist ethics or transcendentalist theory of justice, from Plato to Kant to Rawls: good and evil are not absolutes, but change according to time, place, and culture” (30).

Saunders spends quite a bit of time discussing Wonder Woman’s creator, William Marston, since his personal and professional interests shaped her character. Marston had a degree in law as well as a Ph.D. in psychology from Harvard. In the medium of comic books, however, this well-educated man saw an opportunity “to promulgate his own theories about gender, sexuality, and personality types” (45).

Marston believed that the world would be a better place if men learned to be content in more submissive roles, like those that women were forced to occupy in the early twentieth century and before. Wonder Woman can be the ideal feminist role model: “Wonder Woman is a fantasy figure who asserts, against the entire masculinist symbolic order, that it is possible to be both beautiful and strong, to be nurturing and independent, to be emotional and intelligent, to be assertive and kind….she espouses spiritual values but eschews fanaticism, dogma, and intolerance” (70).

Next to that of Superman, Spider-Man’s origin story is among the most well-known. Peter Parker provides an opportunity to explore “several familiar themes of Judeo-Christian theology, including the temptation of pride, the indelible and yet transformative experience of personal guilt, and the traumatic nature of revelation” (73). Peter Parker struggles with his gifts as well as with his failures. Along with him, we consider what it is that God expects of us in regard to the gifts and abilities that we have been given.

Tony Stark/Iron Man explores questions of  “‘techno-faith’—that is, a fundamental belief in the power of the human will to transform the world to reflect human desires, through the agency of technology” which is particularly evident “in the contemporary discourse of posthumanism” (106). Saunders contrasts “the medieval system of faith in ‘Providence’ to the rationalistic logic of ‘progress,’” which was prominent during the eighteenth-century Enlightenment and has been dominant ever since (114).

Please be aware that my summaries here do not begin to do justice to the depth of Saunders’ own work. His reading and analysis of William Marston’s professional writings in psychology—and the subsequent light they shed on Wonder Woman—are unprecedented; and he then goes on to bring in feminist theologians such as Rosemary Radford Reuther, Daphne Hampson, and Sarah Coakley. Although this is only one example, it is indicative of the quality of work found throughout the entire book.

By examining superhero comic books, Saunders puts Western culture on Freud’s couch. He ponders and elucidates the types of questions that members of Western society have been asking for the last eighty years. Whether residents of this continent or that one, Baby Boomers or Millennials, male or female, we all struggle with the same existential frustration: “I have simply tried to approach superhero comics as fantastic, speculative, and distinctly modern expressions of a perhaps perennial human wish: the wish that things were otherwise” (3).

DJ Dycus is chair of the English and Humanities department at Point University in West Point, Georgia, where he teaches freshman composition, literature and humanities courses. His main academic research has been on graphic novels and comics—the intersection between graphic and verbal forms of communication—specifically Chris Ware’s work Jimmy Corrigan.

7
Facebook Twitter Pinterest
LinkedIn Email
Written By
DJ Dycus
More from DJ Dycus
More than at any other time of my life, I’ve spent this...
Read More