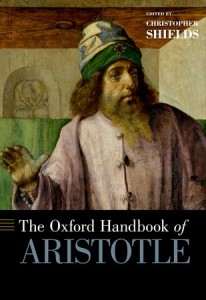 In his Preface, Shields notes: “The Oxford Handbook of Aristotle does not seek to be a general compendium of Aristotelian thought nor even a full and complete reflection of the many forms of Aristotelian study carried out throughout the world today. Instead, it seeks to represent a core activity of this variegated patchwork of international Aristotelian study.”[xii] That said, the Handbook includes twenty-six chapters in seven post-Preface parts: 1) Aristotle’s Philosophical Milieu, 2) The Framework of Philosophy: Tools and Methods, 3) Explanation and Nature, 4) Being and Beings, 5) Ethics and Politics, 6) Rhetoric and the Arts, and 7) After Aristotle. Once again, I have chosen one chapter for special consideration: Chapter 23: “Aristotle on Poetry” by Annamaria Schiaparelli and Paolo Crivelli.

“Aristotle on Poetry” is divided into two sections: poetry and tragedy. In the first section, the authors discuss the structure and concerns of Aristotle’s Poetics, as well as imitation, poetic genres, the development of poetry and the three unities. Suggesting “On the Art of Poetry” as a less misleading title,[p. 613] the authors argue that “[i]t is not clear that the arts listed by Aristotle under the heading of ‘poiêtikê‘ for a unified kind.”[p. 613] And so they conclude: “Thus, on our usage, epic, tragedy, instrumental music, dance, etc. are all form of poetry.”[p. 613] The sentence that follows this conclusion, however, seems strange. The authors state: “Despite the doubts raised in the last paragraph, we shall assume that poetry is a unified kind.”[p. 613]

The second section is less confusing on matters of definition. There, the authors note: “Aristotle opens his discussion of tragedy by offering a definition of its essence [i.e., ‘an action that is elevated and complete and has magnitude’].”[p. 620-621] The authors go on to discuss elements of Aristotle’s definition; namely, purification and tragic error.

Fairly straightforward, this essay provides an overview of the basics. One wonders, however, if the reader might be better off, in this case, going straight to the primary text. 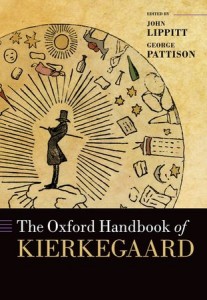 Lippitt and Pattison begin: “Søren Aabye Kierkegaard’s relatively short life–5th May 1813 to 11th November 1855–was largely devoted to what he called his ‘authorship’…. The subject of this Handbook is therefore this ‘authorship’–its context, content, and ‘effective history’ (this last referring to the idea developed by Hans Georg Gadamer that every cultural text is to be understood not only in terms of its context and inner rationale but also its continuing impact on all who are subsequently–and not necessarily consciously–affected by it.”[p. 1] That said, the editors note that “it is impossible to leave Kierkegaard the man entirely out of the picture,”[p. 1] but “almost equally impossible to get him into the picture in any focused, consistent, or unambiguous way.”[p. 2] They conclude:

Perhaps, then, the point is that it is precisely the Protean, mercurial, and multi-voiced nature of Kierkegaard the man that makes him so dangerously fascinating to his now many generations of interpreters. For the truth is that, poor in outward events as it was, Kierkegaard’s life is among the most fascinating of the nineteenth century and it is fascinating because he was, so to speak, both Newman and Nietzsche, both Baudelaire and Ibsen, both a decadent and edifying writer, the ‘melancholy Dane’ and a master of spiritual comfort and guidance. The question of Kierkegaard the man, then, inevitably turns us back to the question of Kierkegaard the author and to the authorship itself, its contents and its impact.[p. 3]

We’ve come full-circle, then, but more importantly, this conclusion leads us to the chapter which I intend to highlight in this review, a chapter that has everything to do with impact; namely, “Kierkegaard and English Language Literature” by Hugh S. Pyper. But first, a word about the Handbook‘s organization. It includes twenty-nine chapters in three post-Introduction parts: 1) Contexts and Sources, 2) Some Major Topics in the Authorship and 3) Kierkegaard After Kierkegaard.  That said, we turn to the final chapter.

Pyper begins: “Kierkegaard’s influence on English-language literature in the twentieth and twenty-first centuries is both direct and indirect, as befits the master of indirect communication.”[p. 570] Some writers refer to Kierkegaard explicitly. Others are “less explicit, but betray the fact that they have read and responded to his work.”[p. 570] Still others draw upon “misreadings and oversimplifications of Kierkegaard,”[p 570] i.e., “a mythical figure, interpreted after the event as the father of existentialism and proponent of irrationalism and individualism with a strange and unhappy life story and doomed love affair.”[p. 570] All this being said, Pyper admits that “Kierkegaard’s influence on English literature in the twentieth and twenty-first centuries is far-reaching, but, by its nature, elusive and hard to chart.”[p. 571] Pyper “concentrate[s] on writers who have more explicitly engaged with Kierkegaard.”[p. 571]

After considering the reception of Kierkegaard by each of these authors, Pyper concludes that “his most lasting legacy for writers may be the way that the act of writing itself accompanies and at times threatens to overwhelm the struggle to find and present an authentic self in his life and work.”[p. 587] In any case, reading this chapter is sure to lead the reader to read (or re-read) one or more of the books discussed.

Most interesting, to my mind, was Pyper’s observation that “one of Kierkegaard’s most significant literary legacies may be the identification of a particular character type: the reader of Kierkegaard.”[p. 571] Along these lines, he notes: “The stereotypical Kierkegaardian reader … has a sense of being set apart from the norms and obligations of everyday life.”[p. 572]

An excellent Introduction from Lippitt and Pattison as well as a host of thought-provoking chapters, this Handbook is well worth your time and effort as it will surely save you both.