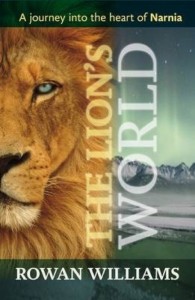 Former Archbishop of Canterbury Rowan Williams recently published a compact volume reflecting on the theological riches of Lewis’ The Chronicles of Narnia, titled The Lion’s World: A journey into the heart of Narnia (SPCK, 2012). This book has been chosen to serve as the accompanying book to BigRead13, an initiative I had the opportunity to contribute to this year. This post is part book review and part reflection on the BigRead initiative and my contribution. I begin with Williams’ book.

The Lion’s World is a short work and one that will be encouraging and enlightening to many readers of Lewis. While it does not necessarily offer many new insights for scholars of Lewis’ work, it is a model for engaging theologically with a literary series in a way that is accessible to a wide audience. It is apparent that Williams has himself engaged with much of the literary criticism about The Chronicles, and he uses this scholarship to provide a foundation for this extended reflection.

BigRead13, of which Williams’ book is a part, is an initiative of the Big Bible Project at the Centre for Biblical Literacy and Communication, part of CODEC. The Centre is based at the University of Durham and is directed by Revd. Dr Pete Phillips and Dr Bex Lewis. The Big Bible Project seeks to increase Biblical literacy in the Christian community by exploring the use of the Bible online and offline. This is the fifth year that the BigRead project has provided Lenten Bible study materials, which are now used by house groups and churches in a number of different countries.

BigRead13, a multi-modal collaborative project, incorporates excerpts from The Lion’s World with reflections on a biblical passage. There is then further interaction with Rowan Williams himself who responds to the reflections of scholars and clergy, presented in the form of weekly videos. The reflections by the scholars and clergy include opportunities for discussion as well as prompts for an artistic or meditative response. Contributors were asked to offer their reflections in both written and as audio recordings, ensuring that this set of materials were accessible to a wide audience. The Bible study materials are broken down into chunks based on the different aspects of a multi-course meal (with equivalent size and depth). The ‘menu’ based format is not something I had encountered before. It certainly lends itself to a house group sharing together over a meal with the meal itself serving to signpost the progression of the study.

I was asked to respond to the second chapter of The Lion’s World, which addresses Lewis’s nineteenth-century literary influences and his critics. In light of Luke 19:29-39, I reflected on the ways in which, as Christians, we must be mindful of seeking to create an image of Jesus Christ that is not supported by Scripture. You can view the materials I prepared for week 2 (titled “The Puppet Christ”) as well as listen to the audio of my reflection here. Personally, the opportunity to reflect on the gospel of Luke alongside C.S. Lewis and E.Nesbit for use by a Bible study was a new and exciting experience for me. It was encouraging to be able to consider how many different ways there were to consider Luke 19:29-39, while also thinking about how Bible study participants might be given the opportunities to express themselves not only verbally but also through meditation, prayer, and artistic responses.

This is the first time a work that has not been written specifically for Lent has been used for BigRead, and it could be considered to be quite risky. After all, in previous years, the text used has been a commentary on one of the gospels by N.T. Wright. However, the combination of having Rowan Williams involved and having C.S. Lewis as the subject matter overcame the potential risks, and it is encouraging to see the theological engagement with literature modeled so well. I hope this project will serve to stimulate further conversations in churches around the world of the value of literature in theological and spiritual formation.

Authored by Anna Blanch. Australian by birth, and inclination, Anna grew up surrounded by the Australian bush, a large extended family, bush poetry, and sport. Anna is currently writing her PhD in Theology and Literature.

0
Facebook Twitter Pinterest
LinkedIn Email
Written By
Anna Blanch
More from Anna Blanch
If i were asked to say what is at once the most...
Read More